Stop pretending you're not rich: Why are Clinton and Biden playing down their wealth?

When top Democrats deny their good fortune, it plays into GOP arguments they’re out of touch with average voters 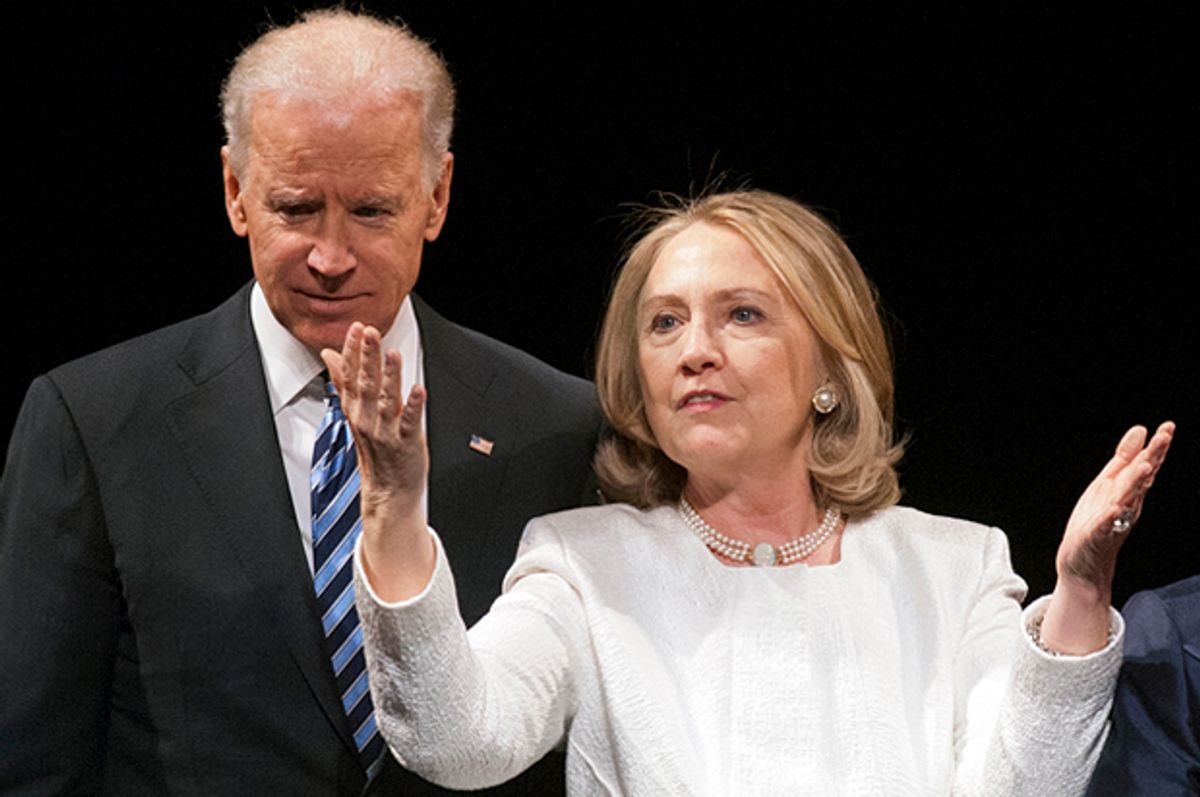 Vice President Joe Biden joined his former colleague Hillary Clinton Monday in trying to play down his comparative wealth. At the White House Summit on Working Families Biden tried to empathize with struggling parents, and he probably went a little too far.

“I can speak a little bit from my own experience,” the vice president told the crowd. He then acknowledged he was wearing a “mildly expensive suit” but insisted “I have no savings accounts” and “I don’t own a single stock or bond.”

“But I got a great pension and I got a good salary,” Biden added.

This comes after Hillary Clinton stepped in it, twice. First she told ABC’s Diane Sawyer she and her husband were “dead broke” when they left the White House – it’s true their debts far outweighed their assets but they both had big book deals – and in an interview with the Guardian published Saturday, she claimed voters concerned about income inequality wouldn’t hold her current wealth against her.

“They don’t see me as part of the problem because we pay ordinary income tax, unlike a lot of people who are truly well off, not to name names; and we’ve done it through dint of hard work.” That was, of course, a jab at 2012 GOP presidential nominee Mitt Romney, who pays a low tax rate because most of his income came from investments.

Now, had Clinton segued into a passionate explanation of how to build a truly progressive tax system, her remark might have made sense, but instead it came off as a cheap shot.

To be fair, Joe Biden is close to telling the truth: As BuzzFeed notes, he was the “poorest” senator when he joined the Obama ticket in 2008, and he lists assets valued at between $276,000 and $940,000, including a rental property. By contrast, President Obama’s assets were listed as valued between $2 million and $7 million. Clinton’s personal wealth is reported to be in the tens of millions of dollars.

But in a country where the U.S. Census Bureau says median net worth (including home value) is only $68,000, even Biden is a wealthy man.

These stumbles on questions of wealth show that even leading Democrats have been influenced by the GOP’s stigmatizing them as privileged hypocrites out of touch with the average voter. Going back to stereotypes about “limousine liberals,” modern conservatives have depicted Democrats as people who want to take the hard-earned dollars of average Americans and give them to people who don’t deserve them (and you know who they are). So Democrats have been reduced to saying they’re not really privileged as a way to say they’re not really out of touch.

This does Republicans’ dirty work for them. To make the obvious point, Franklin Delano Roosevelt did more for poor and working-class Americans (at least whites) than any president in history, and he was very wealthy, and poor and working-class Americans loved him. Democrats shouldn’t be baited into arguments about their comparative personal wealth.

However, while I don’t accept the GOP’s framing here, I wonder if Clinton and Biden’s remarks do indeed reflect their personal distance from the reality of struggling Americans. It’s easy to see how Biden, or even Clinton, could feel that they’re not truly wealthy when they come from middle-class families and walk in worlds of unimaginable wealth, much of it inherited. And maybe that accounts for the lamentable lack of urgency on the issues of poverty and stalled economic opportunity that we see in Washington today, even among many Democrats.