The clear takeaway: All that red meat he throws to the GOP base? He means every word 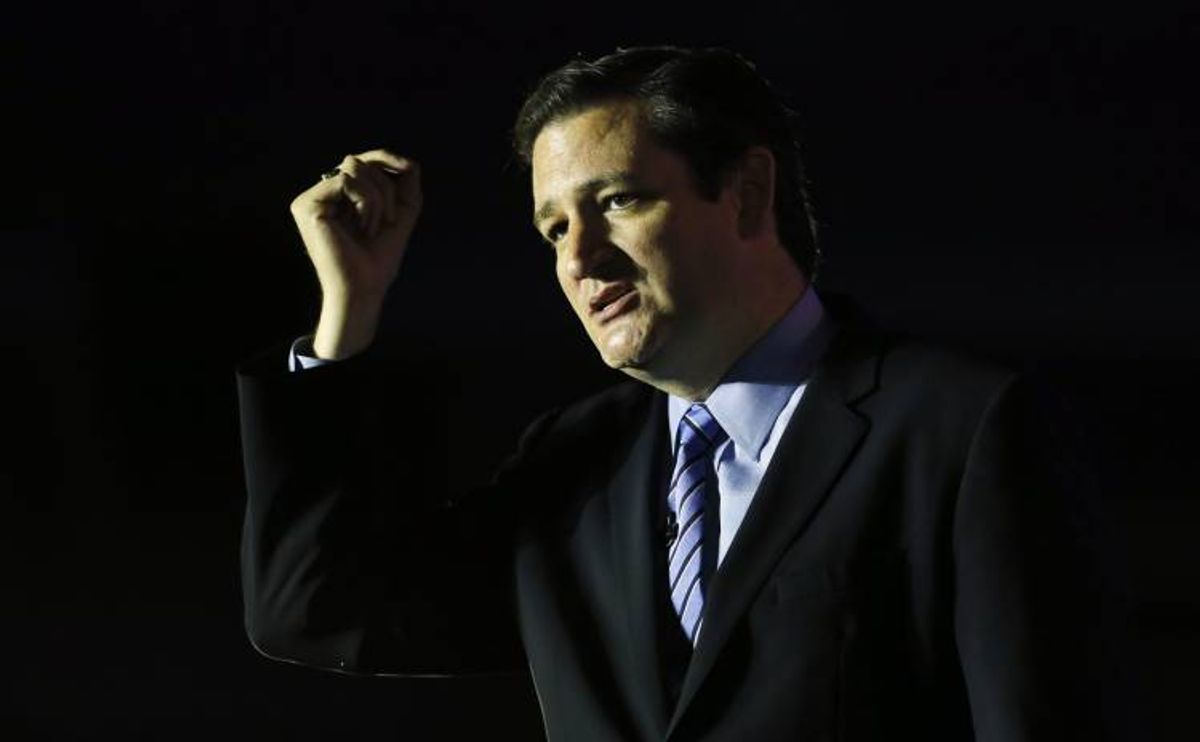 Jeffrey Toobin's latest piece for the New Yorker is a long profile of Sen. Ted Cruz, the Tea Party hero and likely future presidential candidate, which doesn't reveal much we didn't know before but does make at least one truth about Cruz abundantly clear: When it comes to the hardcore libertarian-inflected conservatism Cruz defends in the Senate and on the stump, he's not cynically playing to the GOP base with an eye to 2016. On the contrary, he means every word.

Anyone interested in knowing everything they can about the GOP's biggest Dr. Seuss fan is advised to read the piece in its entirety. But for those of you who are less interested in devoting such a significant chunk of your all-too-finite life to the story of Ted Cruz, here are some of the most revealing tidbits.

He thinks Republican presidential candidates lose because they're insufficiently right-wing:

"It is amazing that the wisdom of the chattering class to the Republicans is always, always, always 'Surrender your principles and agree with the Democrats,'" he told me. "That’s been true for my entire lifetime. The chattering classes have consistently said, 'You crazy Republicans have to give up on what you believe and become more like Democrats.' And, I would note, every time Republicans do that we lose.” Cruz then offered a short history of recent Presidential politics. Richard Nixon ran as a conservative, twice a winner; Gerald Ford, moderate, loser; Ronald Reagan, also twice a winner. “President George Herbert Walker Bush ran as a strong conservative, ran to continue the third term of Ronald Reagan, continue the Ronald Reagan revolution,” Cruz went on. “Then he raised taxes and in ’92 ran as an establishment moderate—same candidate, two very different campaigns. First one won, second one lost. In 1996, you got Bob Dole; 2000 and 2004, you have George W. Bush; 2008, John McCain; 2012, Mitt Romney. And what does the entire D.C. Republican consulting class say? ‘In 2016, we need another establishment moderate!’ Hasn’t worked in four decades. ‘But next time will be the time!’”

Cruz takes a different view of his role in the shutdown [than most]. While the government was closed, the Obamacare Web site, healthcare.gov, made its disastrous début, and the polls turned against the Democrats. Cruz felt that his political argument, not the failure of the Web site, produced the political turnaround. “Many voices in Washington say the fight that we had last fall was not successful,” Cruz told me. “Like any good litigator, at times you think of a battle as a long-term battle. You don’t always accomplish everything in the first skirmish. As a consequence of millions of people last summer and fall getting engaged in that battle, I believe we dramatically elevated the national debate over the harms of Obamacare. And today Democrats are running scared, and the prevailing wisdom is Republicans are quite likely to win control of the Senate because of Obamacare.”

He was nurtured by the conservative movement from a young age:

When Cruz was in his early teens, in Houston, his parents enrolled him in an after-school program run by Rolland Storey, a retired energy executive who wanted to instill the values of the free market in young people. At the Free Enterprise Institute, Storey had his young charges read Milton Friedman, Friedrich Hayek, and other authors revered by conservatives, and then give speeches at Rotary Clubs and similar venues around the state. “They created a spinoff group called the Constitutional Corroborators,” Cruz told me. “And they took five of the students, all of whom had been involved on the free-market side, and we focussed on studying the Constitution. So we’d meet on Tuesdays and Thursdays, for a couple of hours each night, and study the Constitution, read the Federalist Papers, read the Anti-Federalist Papers, read the debates on ratification. And we memorized a shortened mnemonic version of the Constitution.”

“Ted was just an amazing speaker at fourteen, by far the most impressive student we ever had,” Winston Elliott III, who became affiliated with Storey’s organization when Cruz was a student and now serves as its president, told me. “Our program is very much committed to private property, free markets, and constitutionally limited government. When it came to the Constitution, Rolland was a great believer in original intent, and so the focus was very much on what the Constitution says. We brought in a memorization expert. We wanted them to focus on the words. Ted was just an ideal student, because he just absorbed everything, and he came from a conservative family in the first place.”

When he was young, his father, Rafael — a pastor and Cuban émigré — would warn him that then-President Jimmy Carter was like Fidel Castro:

“It all started for us in 1980, when Ted was nine years old,” Rafael Cruz told me. “I was involved with a group called the Religious Roundtable, which was working with the Moral Majority to help mobilize Christians to elect Ronald Reagan. All during that year, we talked every night about how important it was to get rid of this socialist-leftist President Carter and replace him with a constitutional conservative, Ronald Reagan. I must have told Ted a dozen times, ‘When I was in Cuba and they took away our freedoms, I had a place to go. If we lose our freedoms here, where are we going to go?’”

He adores the Federalist Society, a group of conservatives dedicated toward promoting a strongly conservative reading of the Constitution, and considers it his "home":

On another early trip as a senator-elect, Cruz made a speech to the Federalist Society, to which he has since returned several times. Founded in 1982, the society is a forum for discussion of conservative legal ideas. It takes no formal positions on issues, and members don’t agree with each other on every topic, but it has long operated as the network for potential Republican judicial nominees and executive-branch officials. In practice, the Federalist approach has meant an “originalist” view of the Constitution, which, in turn, reflects the priorities of the modern Republican Party—including an expansive view of an individual’s right to bear arms under the Second Amendment, a rejection of constitutional protections for a woman’s right to choose to have an abortion, a porous barrier between church and state, and a narrow conception of the power of the federal government to intervene in the economy. Dozens of judges have brought a Federalist orientation to the bench in recent years; Cruz is the first politician, and the first prospective President, to put their ideas at the center of national debate. “Like many people in this room, I’ve grown up with the Federalist Society,” he said soon after he arrived in Washington. “This has been my home for my entire adult life, my entire professional life.” It was at a later Federalist Society dinner that Cruz was inspired to write a series of reports on what he found to be abuses of power by the Obama Administration. The idea came from another prominent conservative lawyer, Justice Samuel Alito, who was the speaker that evening.