How to encounter a black woman's body: The politics of Mammy Sphinx

This is how it feels when people are more comfortable seeing relics of you, than figuring out how to live among you 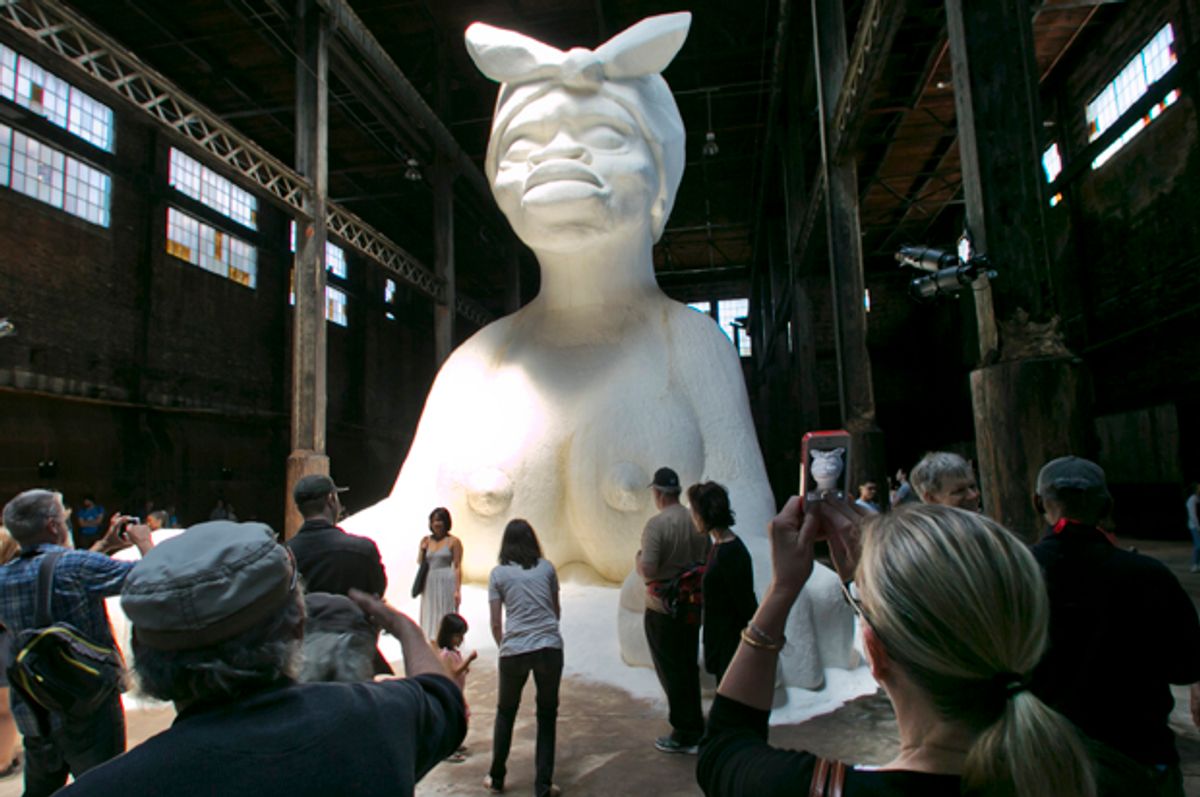 "A Subtlety or the Marvelous Sugar Baby," by artist Kara Walker, on display inside the former Domino Sugar Refinery, Brooklyn, NY. (AP/Richard Drew)
--

When I was about 7 years old, I eagerly bit into a piece of freshly cut, raw sugar cane, that had just been harvested from my great-grandmother’s garden. As the cold, sickly sweet juices gathered in my mouth, tasting very little like what I associated with sugar, I vowed never to taste such a thing again. This is one vow, after all these years, I have managed to keep.

This being my most memorable encounter with the raw product of sugar, I wasn’t prepared fully to step into the Domino Sugar Factory recently to see Kara Walker’s latest exhibit. “On Subtlety” (for short) features as its centerpiece a gigantic white sugar sculpture known as the Mammy Sphinx.

After walking through all the figures of little worker boys, coated in sticky molasses, toting baskets nearly half their size, you encounter the massive and majestic white sculpture at a distance, surrounded by all of us and our gawking eyes. I appreciated that there was time and space for an approach, that there was time to make space for my own trepidation. Having studied a bit of Kara Walker’s art in graduate school, I knew her work would be jarring, imposing, non-subtle, gratuitous and provocative. That is the point, I guess.

As my homegirl and I gingerly approached first the front of her, then her left flank, then her backside, then finally her right flank, taking in her massive whiteness, I felt oddly – cared for.

Looking at her stout thighs, her round posterior, and her sturdy feet, parts of her body felt familiar to me, like the bodies of so many thick, round, healthy (as we colloquially refer to these thick sanguine bodies back home) women I know. Those women grew sugar cane, and corn, and potatoes, tilled land, shelled bushels of peas, birthed generations, and made a headscarf look like a crown. She reminded me of all of those women who are a part of me and, thus, of myself.

I know there is a risk in making such connections, especially with this body type that conjures up what Patricia Hill Collins refers to as the “controlling image” of the Mammy. I know the risk, of associating my own body with the asexual, overly maternal black woman, whose compulsory labor and coerced affection for white children, far too many white folks romanticize.

But our affective relationships with art are intrinsically complicated.  I will allow myself that grace even as I can’t quite bring myself to grant it to the man who made his female companion take a picture of him as he posed with his hand, flatly in the air, pointing in the direction of the sphinx’s rear. Taken at a certain scale, the picture most assuredly will look like his hand is planted firmly on her ass.

This is how it feels … to be a problem … to experience this kind of art, which is so deeply about race and class, among the likes of people who share a very different history with such bodies than you do.

Standing there talking with my friend, a Brooklynite, processing all the emotions the Sphinx conjured, including the slight discomfort of encountering her in a factory with these many throngs of non-black people, our conversation inevitably turned, as so many think pieces about the sculpture have done, to gentrification. How do you enjoy this art when stats would probably bear out that many of these Brooklyn newcomers live in places previously populated by black families that have now been priced out of the neighborhood? What happens when people are far more comfortable going to see relics of you – trace evidence of your presence -- in a makeshift museum, than figuring out how to live in an unimperialist fashion among you?

Last week, Matthew Desmond, a Harvard sociologist, wrote about the epidemic levels of eviction for poor black women. Not only do these women make lower wages than their black male working-class counterparts, but they often have children, which makes them more vulnerable to eviction. Once women are evicted then it becomes even harder for them to find housing. So Desmond concludes that while poor black men are “locked up,” poor black women are “locked out.”

Even as other critics have discussed the politics of “dirty sugar” that shape the existence of the Domino Sugar Factory and talked about how its imminent destruction to make way for high-rise condos on the waterfront, very few of them have seemed able to really center a black women’s body and labor within the space of this conversation. Bringing much needed diasporic and non-U.S. centric points of view to the table, many of these pieces still fail to really grapple with this simulacrum of a black woman’s body, the materiality not only of the sculpture, but the material displacements that black women experience every day in places like Brooklyn.

Evictions of sisters in my milieu are whispered, shameful experiences, better to be gotten through and gotten over, then forgotten about. But they are happening in these places built by the labor not just of black people but of black women. This history of imminent displacement seems incredibly difficult for black women to shake, especially when our bodies remain tethered to controlling images that will not turn us loose.

One of the most striking things about the Sphinx is that she lies there on her haunches, rooted in place, demanding that we all reckon with what she means, together, despite our separateness. Colorlines reports that a group of black women organized on Facebook to come see the exhibit after being disturbed by the paucity of black people coming to see the Sphinx. Nick Powers, a professor at SUNY Westbury, attending as part of the group, challenged those who stood behind the sculpture for taking offensive photos of her vulva. I am glad this group disturbed the peace, making it clear that despite the sugary refined whiteness of the Sphinx, nothing about the lives of the women she represents, the indignities they endured, their bodies on display, their lives invisible, their labor summarily exploited and outsourced to build the wealth of white people, was remotely idyllic.

During the process of carving the Sphinx, Kara Walker made a collage as part of her inspiration for the structure of the sculpture. The collage, which can be seen here, is a the picture of a scantily clad black woman, perhaps a video vixen lying on her haunches, ass out, adorned with lingerie. The head of the woman has been ripped off or covered over and replaced with an image of the Sphinx.

The Mammy Sphinx blends high and low art, reminding us, as proselytizing Afrocentric types are wont to do, of both the supposedly lofty Egyptian ancestral heritage from which we (the undifferentiated mass of diasporic Africans) hail and the supposedly low depths to which we (African-American women who allegedly don’t know our history) have succumbed, pulled there mostly by our willingness to muck around in cultural quicksand. Kara Walker reminds us that black women’s bodies are not reducible to these narratives, for our bodies experience pain, and pleasure, and possibility.  We are people with history, but also agency.

I hold in tension the body of the actual woman that Walker used to shape the Sphinx with my own impression of the slightly protruding vulva that punctuates the back of the sculpture. The pictures made it seem both grotesque and gratuitous. But seeing it in person, it felt like just a vulva, a body part that every female-bodied person has. For a black woman’s vulva to feel like just a vulva, when it can never in the context of American imperialism be only that, shows that this piece has something for all who encounter it. The Sugar Sphinx’s vulva looked regular not mythical, conjuring and simultaneously refusing a reading of the figure as Saartjie Bartmann. Her body had some of the makings of a classic nude sculpture, granted to a body type never considered to be either classy or respectable.

Still I was startled to see a black woman and her three stair-stepped sons posing for pictures near the Sphinx’s vulva. While I appreciated their mom bringing them to the exhibit, it was apparent to me that none of us ever really knows how to encounter a black woman’s body (even a sculpture of one): the labor both productive and reproductive that it has done, the unknown sentiments and dreams it contains, hinted at by the figa symbol in her left hand, the both/and of its impartations for fertility and the insistence of its “Fuck you,” left unknown to us and to history.