The right's scoundrel returns: Why is Elliott Abrams allowed back in polite company?

Champion of most horrid U.S. policies ever is unfit to pick out clothes. So why is Politico letting him bash Obama? 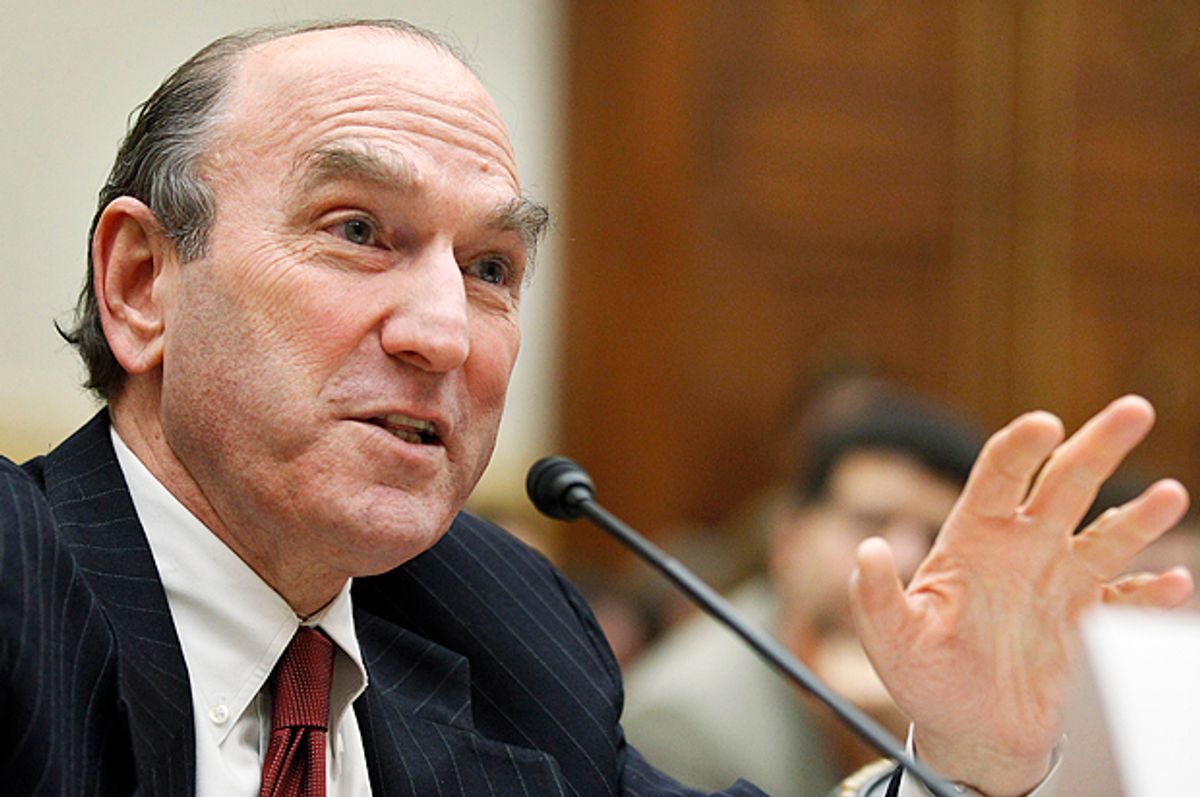 If there was any doubt that the neocon undead will walk the earth forever, one only has to look at the latest reanimation of one of the most notorious of the whole bunch: none other than Elliott "I don't know nothin' about Salvadoran massacres" Abrams. It's hard to believe that someone with his record would ever be consulted about anything more controversial than whether the veal looks good today, but here he is, in Politico magazine, giving credence to the belief that the zombie apocalypse is nigh.

His piece is titled "The Man Who Broke the Middle East." And no, it's not about his former boss George W. Bush or his good friend Dick Cheney. It's about President Obama, who Abrams says inherited a wonderful peaceful world filled with puppies and flowers and fresh baked bread:

The Middle East that Obama inherited in 2009 was largely at peace, for the surge in Iraq had beaten down the al Qaeda-linked groups. U.S. relations with traditional allies in the Gulf, Jordan, Israel and Egypt were very good. Iran was contained, its Revolutionary Guard forces at home. Today, terrorism has metastasized in Syria and Iraq, Jordan is at risk, the humanitarian toll is staggering, terrorist groups are growing fast and relations with U.S. allies are strained.

And then he went and ruined the whole thing by failing to declare war on Iran, Egypt and Syria when he had the chance. And why did he miss these opportunities? Hubris, of course. (And neocons know from hubris ...) Obama claimed that he understood the world because he'd grown up in other countries and studied their history unlike Abrams' old bosses Reagan and Bush who understood that they were fools who needed to listen to "experts" like Paul Wolfowitz and ... Elliott Abrams.

One can't really blame these poor neocons. They had a rough row to hoe with all the carnage and failure of the Bush years. Their arrogance was epic and their failures were overwhelming. They have nothing but fantasy to fall back on now.

There has been much discussion of the mainstream media's reflexive eagerness to engage these people to dispense opinions and analysis despite their dismal track record of getting virtually everything wrong for decades at a time. And that push-back has had some success in at least reminding the public who the main ideological perpetrators of our disastrous foreign policy and national security strategy during the Bush administration were. But Elliott Abrams is something else.

He's a Neocon OG, going all the way back to Scoop Jackson's day when he was a young Democratic anti-communist hawk with a starry-eyed belief that the U.S. could force the rest of the world to adopt democracy whether they liked it or not. Like most of the others he fully converted to wingnuttia in 1980 and his "blood-in" was his self-described job as the "gladiator" for the Reagan Doctrine in central America. He eagerly delved into the job of helping right-wing killers and thugs "fight communism" by any means necessary, including the perpetration of war crimes and atrocities. David Corn explained Abrams' very special public relations role in this piece from some time back in the Nation:

During a Nightline appearance in 1985, he was asked about reports that the US-funded Salvadoran military had slaughtered civilians at two sites the previous summer. Abrams maintained that no such events had occurred. And had the US Embassy and the State Department conducted an investigation? "My memory," he said, "is that we did, but I don't want to swear to it, because I'd have to go back and look at the cables." But there had been no State Department inquiry; Abrams, in his lawyerly fashion, was being disingenuous. Three years earlier, when two American journalists reported that an elite, US-trained military unit had massacred hundreds of villagers in El Mozote, Abrams told Congress that the story was commie propaganda, as he fought for more US aid to El Salvador's military. The massacre, as has since been confirmed, was real. And in 1993 after a UN truth commission, which examined 22,000 atrocities that occurred during the twelve-year civil war in El Salvador, attributed 85 percent of the abuses to the Reagan-assisted right-wing military and its death-squad allies, Abrams declared, "The Administration's record on El Salvador is one of fabulous achievement."

Sound familiar? Here's a reminder from about 30 seconds ago:

The Middle East that Obama inherited in 2009 was largely at peace, for the surge in Iraq had beaten down the al Qaeda-linked groups. U.S. relations with traditional allies in the Gulf, Jordan, Israel and Egypt were very good. Iran was contained, its Revolutionary Guard forces at home.

That's right. Iraq too was a "fabulous achievement" worth every drop of innocent civilian blood it cost the people who lived there. In other words, it's all just part of doing a heckuva job. Abrams clearly learned nothing from his experience in Central America or Iraq. (Well, he did learn one thing: that he can get away with murder. Recall that under indictment in the Iran Contra scandal, Abrams was pardoned by George H.W. Bush on his way out the door in 1991.)

He remains convinced of his own righteousness despite a pile of evidence as high as bodies of innocent women and children in the village of Mozote that this decades-long neocon crusade to bring democracy to the world at the end of a gun has created some of the most malevolent U.S. policies in recent history. People around the world now plead: "Please stop freeing us, we beg you!"

The mere fact that Elliott Abrams, a man who knowingly covered up war crimes and even boasted about the success of policies that enabled them, is still out there, running around free, gainfully employed, suffering no loss of social standing or respect, tells the world exactly how seriously we take our commitment to human rights and international law. No wonder Abrams' old boss, George W. Bush, had such a hard time answering the question: "Why do they hate us?" After sputtering a bit he answered:

"I'm amazed that there's such misunderstanding of what our country is about that people would hate us. I am -- like most Americans, I just can't believe it because I know how good we are."

I'd imagine that evoked some rueful chuckles from the survivors of the Mozote massacre.

The facts of the the events at Mozote were definitively laid out in Mark Danner's book called "The Massacre at El Mozote."  He wrote about it in the New Yorker, here.