When his party's base turned on him, Joe Lieberman sought his revenge. Now Thad Cochran could lead a new revolution 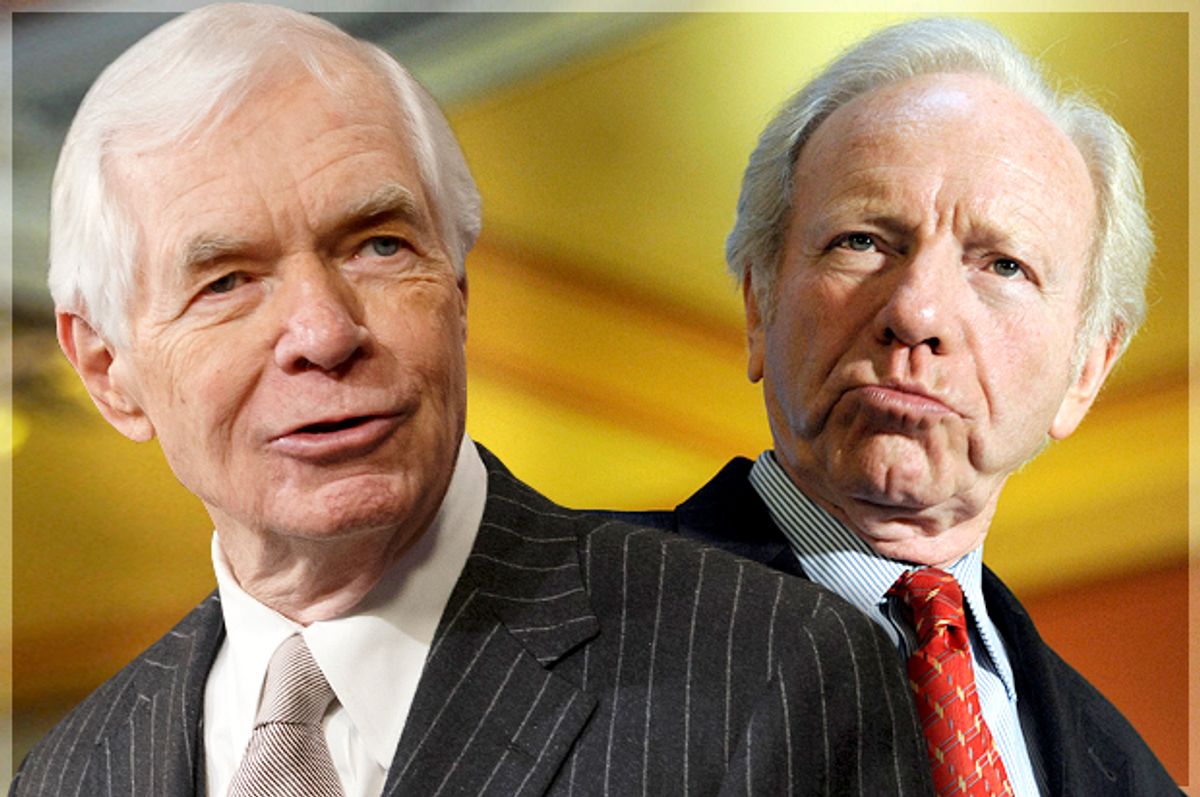 Looking over the reaction among the Tea Party right last week, it's clear that this is a very painful time for activists who had hoped to send a message to the Republican establishment by unseating longtime Mississippi Sen. Thad Cochran and replacing him with a conservative outsider. But the spectacle of a Republican incumbent on the run from a grass-roots insurgent retaining his office through the good graces of liberal African-Americans had to hurt more than anything. It's one thing to lose a fight, it's quite another to do so because your political enemies helped your own party defeat you.

There were probably plenty of liberals who felt a sense of déjà vu when they read all those angry tweets by conservative activists. After all, it was only eight years ago that they suffered a similar fate. Back in 2006, liberals from all over the country pooled resources and energy to back an upstart candidate to challenge one of their Democratic bêtes noirs, Sen. Joe Lieberman of Connecticut. He had been an annoying apostate for many years, from lugubriously moralizing against President Clinton's consensual indiscretions to going on television as the Democratic vice-presidential candidate and pandering to the GOP during the Florida recount. But it was his unyielding support for George W. Bush's Iraq policies that finally drove Democratic activists to try to defeat him in a primary.

It caused much pearl clutching among the cognoscenti, who sensed that allowing the activist riffraff to have their way would be to introduce all forms of chaos into the establishment. Even the "liberal" Jonathan Chait sounded the warning in the Los Angeles Times:

In the end, though, I can't quite root for Lieberman to lose his primary. What's holding me back is that the anti-Lieberman campaign has come to stand for much more than Lieberman's sins. It's a test of strength for the new breed of left-wing activists who are flexing their muscles within the party. These are exactly the sorts of fanatics who tore the party apart in the late 1960s and early 1970s. They think in simple slogans and refuse to tolerate any ideological dissent. Moreover, since their anti-Lieberman jihad is seen as stemming from his pro-war stance, the practical effect of toppling Lieberman would be to intimidate other hawkish Democrats and encourage more primary challengers against them.

(Chait has written with equal contempt for the Tea Party many times but nonetheless celebrated the right-wing insurgent victory over former House Majority Leader Eric Cantor. Apparently, even the Tea Party is a lesser threat to good order than those "fanatics" who supported Ned Lamont.)

The analogy between the two campaigns is imperfect simply because Lieberman was actually a much more disloyal backstabber than Cochran has ever been. His willingness to cozy up to the Republicans was legendary, while Cochran is just a standard-issue conservative Republican who gets what he needs for his state and otherwise doesn't rock the boat. When challenger Ned Lamont won the primary outright and became the legitimate Democratic nominee for the Senate, Lieberman refused to take no for an answer and ran as an independent. He kept his seat. Seventy percent of Republicans voted for him in the end.

Other than showing that the force is strong with the political establishment of both parties, this is relevant because the result of this sort of ugly internecine battle is often a change of attitude by the winning candidate when he (and his staff) go back to Washington. Lieberman was scarred by his campaign and never forgave the left for challenging him. In his last term he made a fetish out of thwarting them at every turn, even going so far as to singlehandedly shoot down his own proposal to lower the Medicare age to 55 during the healthcare debate. It was seen as a gesture of goodwill to the left of the Democratic Party and he was having none of it.

What of Thad Cochran? Will he pull a Lieberman and use what will likely be his last term to pay back the Tea Partyers who challenged him? (He actually has good cause to be personally angry; their shenanigans breaking into his wife's nursing home were utterly shameful.) Or will he do what most Republicans do in this situation and move as far to the right as he can get and cower there?

You never know. He's an older gent and sometimes that focuses the mind in original ways. At his age, he might just want to do the right thing -- and in this case that means representing the constituents who voted for him, including those Democrats who helped him beat back the Tea Party yesterday. A Southern GOP senator who actually cares about his Democratic African-American constituents could be as revolutionary as the Tea Party thinks it is.