10 things America does so much worse than Europe 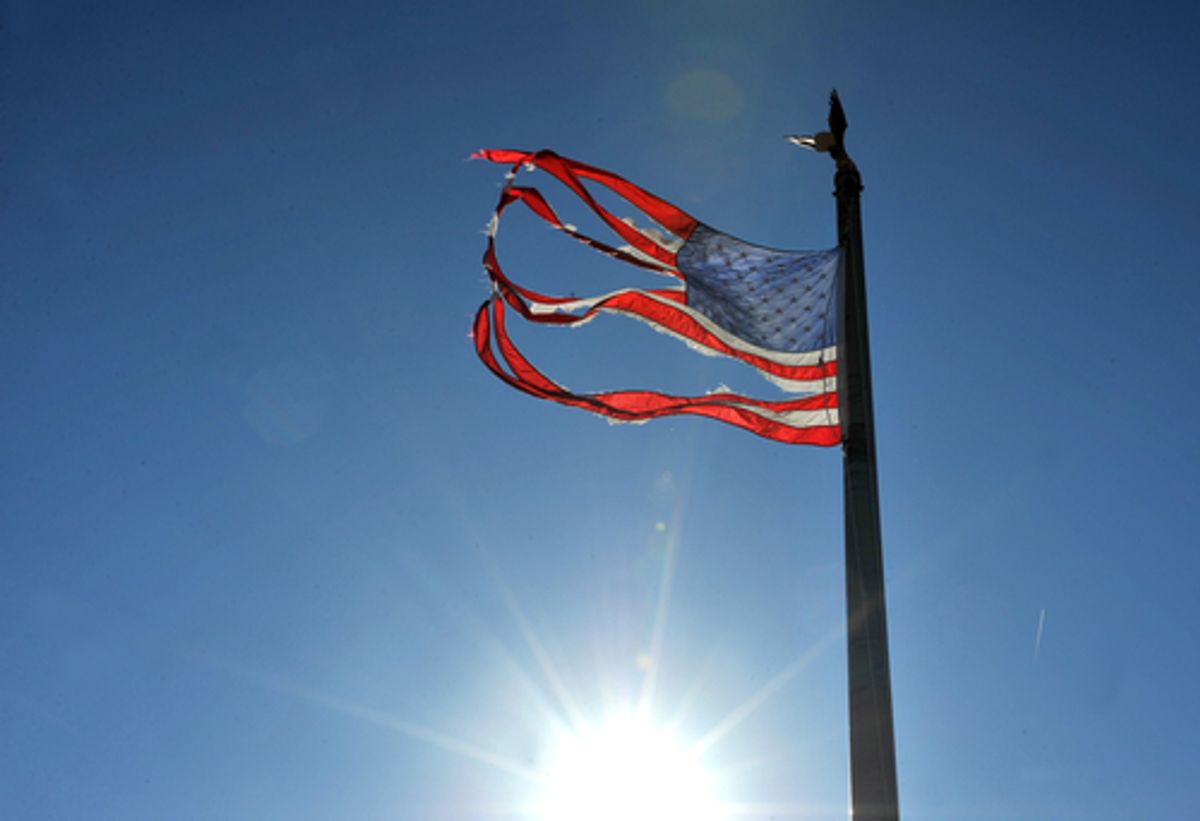 The term “American exceptionalism” is often tossed around by politicians. Neocons, far-right Christian fundamentalists and members of the Republican Party in particular seem to hate it when anyone dares to suggest that some aspects of European life are superior to how we do things. But facts are facts, and the reality is that in some respects, Europe is way ahead of the United States. From health care to civil liberties to sexual attitudes, one can make a strong case for “European exceptionalism.” That is not to say that Europe isn’t confronting some major challenges in 2014: neoliberal economic policies and brutal austerity measures are causing considerable misery in Greece, Spain and other countries. The unemployment rate in Spain, the fourth largest economy in the Eurozone, stands at a troubling 26%—although Germany, Switzerland, Denmark and Iceland have lower unemployment rates than the U.S. (5.1% in Germany, 3.1.% in Switzerland, 4.6% in Iceland, 4.2% in Denmark). But problems and all, Europe continues to be one of the most desirable parts of the world. And the U.S.—a country that is in serious decline both economically and in terms of civil liberties—needs to take a close look at some of the things that European countries are doing right.

Below are 10 examples of “European exceptionalism” and areas in which Europe is way ahead of the United States.

2. Less Violent Crime Than the U.S.

For decades, the Christian Right has been trying to convince Americans that social conservatism and abstinence-only sex education programs will reduce the number of unplanned pregnancies and sexually transmitted diseases. The problem is that the exact opposite is true: European countries with comprehensive sex-ed programs and liberal sexual attitudes actually have lower rates of teen pregnancy and STDs. Looking at data provided by the Centers for Disease Control and Prevention (CDC), the Guttmacher Institute, Advocates for Youth and other sources, one finds a lot more teen pregnancies in the U.S. than in Europe. Comprehensive sex-ed programs are the norm in Europe, where in 2008, there were teen birth rates of 5.3 per 1000 in the Netherlands, 4.3 per 1000 in Switzerland and 9.8 per 1000 in Germany compared to 41.5 per 1000 in the United States. In 2009, Germany had one-sixth the HIV/AIDS rate of the United States (0.1% of Germany’s adult population living with HIV or AIDS compared to 0.6% of the U.S. adult population), while the Netherlands had one-third the number of people living with HIV or AIDS that year (0.2% of the Netherlands’ population compared to 0.6% of the U.S.’ adult population).

Anti-GMO activists are fighting an uphill battle in the U.S., where the Monsanto Corporation (the leading provider of GMO seeds) has considerable lobbying power and poured a ton of money into defeating GMO labeling measures in California and Washington State. Some progress has been made on the anti-GMO front in the U.S.: in April, Vermont passed a law requiring that food products sold in that state be labeled if they contain GMO ingredients (Monsanto, not surprisingly, has been aggressively fighting the law). And GMO crops have been banned in Mendocino County, California. But in Europe, GMO restrictions are much more widespread. France, Switzerland, Austria, Germany, Bulgaria, Hungary, Poland and Greece are among the countries that have either total or partial bans on GMOs. And in Italy, 16 of the country’s 20 regions have declared themselves to be GMO-free when it comes to agriculture.

Logic never was the Christian Right’s strong point. The same far-right Christian fundamentalists who favor outlawing abortion and overturning the U.S. Supreme Court’s Roe v. Wade decision of 1973 cannot grasp the fact that two of the things they bitterly oppose—contraception and comprehensive sex education programs—reduce the number of unplanned pregnancies and therefore, reduce the need for abortions. But in many European countries, most politicians are smart enough to share Bill Clinton’s view that abortion should be “safe, legal and rare.” And the ironic thing is that European countries that tend to be sexually liberal also tend to have lower abortion rates. The Guttmacher Institute has reported that Western Europe, factoring in different countries, has an average of 12 abortions per 1000 women compared to 19 per 1000 women in North America (Eastern Europe, according to Guttmacher, has much higher abortion rates than Western Europe). Guttmacher’s figures take into account Western Europe on the whole, although some countries in that part of the world have fallen below that 12 per 1000 average. For example, the UN has reported that in 2008, Switzerland (where abortion is legal during the first trimester) had an abortion rate of 6.4 per 1,000 women compared to 19.6 per 1000 women in the U.S. that year. And Guttmacher has reported that countries where abortion is illegal or greatly restricted tend to have higher abortion rates than countries where it is legal: back-alley abortions are common in Latin America and Africa.

Clearly, better sex education, easier access to birth control and universal healthcare are decreasing the number of abortions in Western Europe. So instead of harassing, threatening and terrorizing abortion providers, the Christian Right needs to examine the positive effects that sexually liberal attitudes are having in Switzerland and other European countries.

The U.S. made a small step in the direction of universal healthcare when Congress passed the Affordable Care Act in 2010, but the U.S. is so backwards when it comes to health care that implementing even the modest reforms of the ACA (which doesn’t go far enough) has been an epic battle. Meanwhile, every developed country in Western Europe has universal health care, which is implemented in different ways in different countries. Some European countries have single-payer systems (the U.K. and Spain), while others have public/private systems (France, for example) and others have systems that are essentially private and have employer-based insurance but force insurance companies to adhere to tough and strict government regulations. A 2014 article in The Atlantic reported that with Obamacare, the U.S.’ health care system may end up looking more like Germany’s—which reporter Olga Khazan described as “multi-payer, compulsory, employer-based, highly regulated, and fee-for-service.” But health care reform still has a long way to go in the U.S., where giant insurance companies call the shots and medical bankruptcies continue to be much more common than they are in Europe.

Easier, more affordable access to quality health care is one of the things that can increase life expectancy, and in much of Western Europe, people are outliving Americans. According to the World Health Organization (WHO), overall life expectancy (factoring in both genders) in the U.S. is 79 compared to 83 in Switzerland (85 for women, 81 for men), 82 in Italy, Sweden, France, Spain, Iceland and Luxembourg, 81 in Norway, Austria, the Netherlands, Germany, Finland and the Republic of Ireland, and 80 in Malta, the U.K., Belgium, Portugal and Slovenia. It should be noted that in some of the poorer parts of the U.S., life expectancy is well below the WHO’s 79 average and is comparable to what one finds in Third World countries: in 2013, a report by the Institute of Health Metrics and Evaluation at the University of Washington found that life expectancy for males was only 63.9 in McDowell County, West Virginia and 66.7 in Tunica County, Mississippi. So in McDowell County, the average male dies 18 years younger than the average male in Switzerland.

For the vast majority of Americans, living without a car is impractical. Public transportation is woefully inadequate in most parts of the U.S., and only a handful of American cities make it easy to be without a car (among them: New York City, Chicago, Philadelphia and Boston). But even in those places, a car becomes a necessity in the surrounding suburbs. Europe, however, has some of the best, most extensive public transportation systems in the world. From London to Rome to Paris to Barcelona, mass transit is a way of life for millions of Europeans. And there are many advantages to that: less congestion, reduced air pollution, health benefits (walking is great exercise), a vibrant street scene/sidewalk culture and more productivity in the workplace (getting to and from work is easier when the busses and trains are convenient and run frequently). Plus, making it easier for people to be without a car reduces the number of DUIs.

Barack Obama offended a lot of xenophobic Republicans when, during his 2008 presidential campaign, he noted that the U.S. lagged way behind Europe when it came to proficiency in a second or third language, but Obama was right—and in 2012, a European Commission report on foreign-language study in the European Union (EU) found that “on average, in 2009/2010, 60.8% of lower secondary education students were learning two or more foreign languages—an increase of 14.1% compared to 2004-2005. During the same period, the proportion of primary education pupils not learning a foreign language fell from 32.5% to 21.8%.” The report found that in the EU, foreign-language study often began as early as six to nine years of age, which is quite a contrast to the U.S.—where foreign-language study is a rarity at the elementary school level and isn’t nearly as common as it should be at the middle school or high school levels.