Kate Koenig, a freshman at the University of Pittsburgh, was allegedly outed after her father read her mail 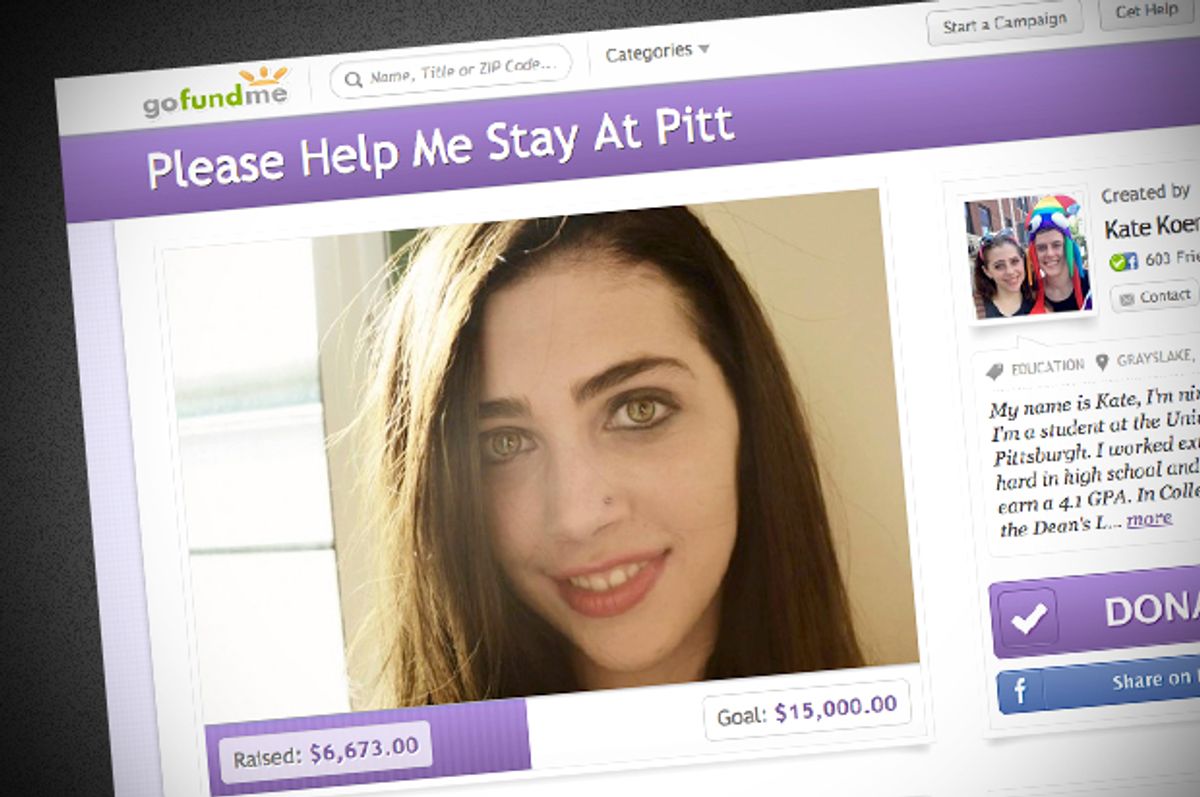 Update: Some sources are reporting that Koenig's story is a scam.

College student Kate Koenig, who identifies as both pansexual and gay, is attempting to crowd-fund her college tuition after her parents cut her off due to her sexual orientation. According to the New York Daily News, Koenig was outed when her father looked through her mail, just before the start of her freshman year at the University of Pittsburgh in 2013.

In the weeks that followed, Koenig learned that she was "cut off" financially from her parents and her grandmother, who disapproved of her orientation and of her relationship with a transgender man.

"They don't agree with my sexuality and my relationship. They believe it's immoral and it's just wrong," Koenig said in a video that she posted to YouTube in September. The 19-year-old was able to continue her first semester, which her parents had already paid for, and convinced her parents to co-sign a loan for a second semester. However, the funding ended, and Koenig moved out and, while working two jobs, plans to enroll in community college this year.

However, she still aspires to go to Pitt and continue her liberal arts degree. "I have some money saved up from my summer job and a $6500 school loan which will be used toward the second semester," she wrote in her GoFundMe campaign, "but I still need about $15,000 on top of that in order to make it through this school year." Her expenses also include the cost of insurance, medicine, rent and food.

Koenig has received a little more than $2,000 in donations in just the first day of her campaign, but it's likely that even if she can finance her next year at a state school (the most expensive state school in the country), she'll struggle to piece together funding for her education. A 2013 study from Sallie Mae, as reported by the Pew Research Center, found that the average family relies on a mix of funding streams for college: in the 2012-13 year, 43 percent of those funds came from the savings and incomes of the student (11 percent), parents (27 percent), other friends and family (5 percent), while 57 percent of funding came from loans taken out by students (18 percent), parents (9 percent), and grants and scholarships (30 percent). On top of that, many loans require a co-signer.

While experts debate the value of college and whether it's worth the inflated costs (and debt), studies show that students are increasingly willing to shoulder debt for a college education. And, though college graduates struggle to find good jobs, they still out-earn people their age who don't have degrees, Pew reports.

Koenig, who earned a 4.1 GPA and landed on the Dean's List both semesters so far, hopes to major in English and history, with a minor in either German or film studies. She hopes to become a novelist and photographer.