This is what it's come to: As children flee horrifying violence in their home countries, the right assaults them 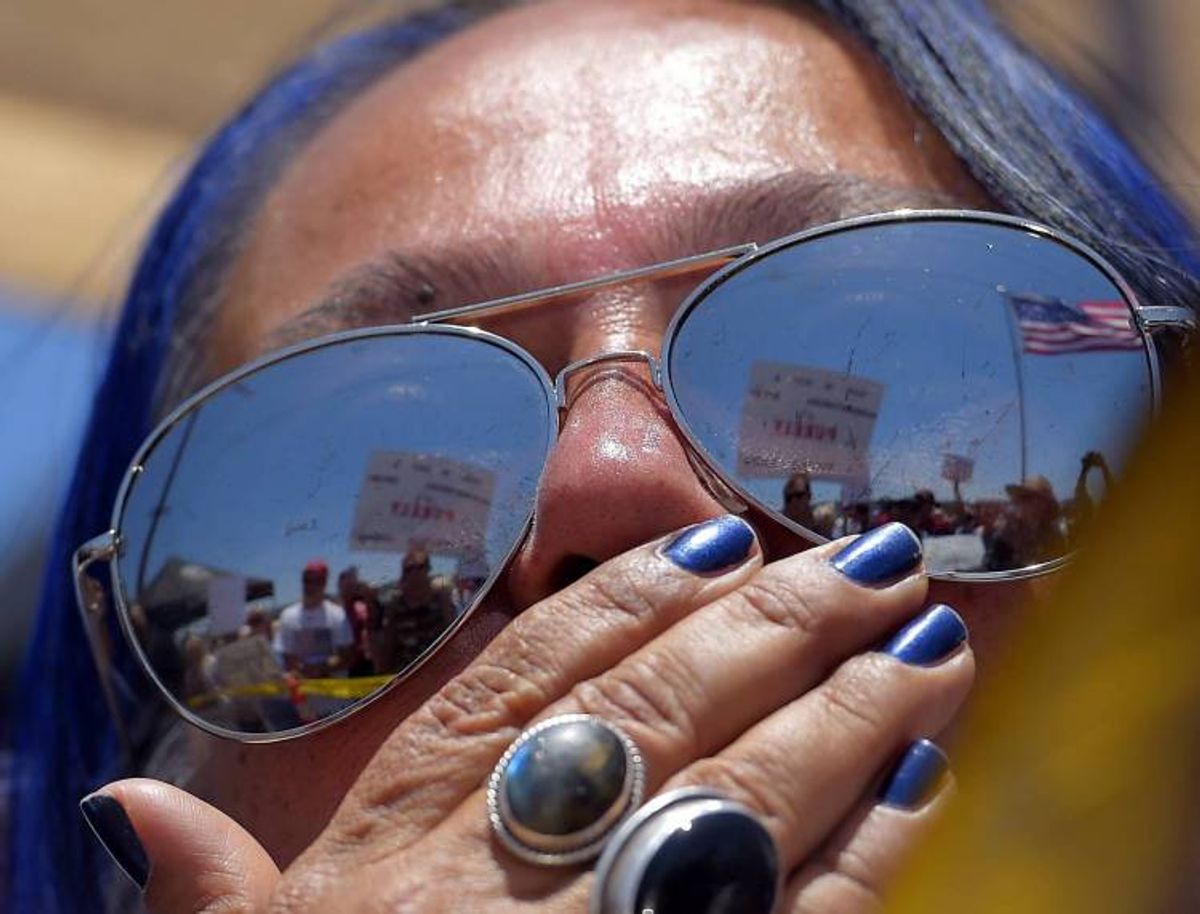 A pro-immigration demonstrator looks across a police line at the opposing side, Friday, July 4, 2014, outside a U.S. Border Patrol station in Murrieta, Calif. (Associated Press)
--

It has to come as a shock to decent people everywhere to see the vitriol and rage written on the faces of anti-immigrant protesters toward the recent wave of unaccompanied Central American children seeking asylum at the United States' southern border with Mexico. One can perhaps understand on some level the angst of American workers who feel their standard of living is being challenged by low wage labor (although truthfully, low wage migrants are the least of their worries). And despite the narrow-minded nativism that fuels so much of this anxiety, a tough economy and scarcer resources always tend to reinvigorate ancient tribal conflicts.

But this is something else.

These are kids whose desperate parents are sending them away on their own to escape horrifying violence in their home countries. According to the New York Times these countries have been overrun with gang warfare, with kids as young as 6 and 7 being kidnapped and tortured to death.

And what is the response of the right wing? The protests in Murrieta, California, over the past week show scores of Americans screaming and spitting at busloads of kids and mothers with infants calling them diseased and worse. Major right-wing groups and media organizations are demagoguing the humanitarian crisis as an invasion of dependent leeches coordinated with the Democratic Party to bolster its voter rolls. (If only the Democrats were that far thinking ...) And not to put too fine point on it, they are now calling for the president to rescind his executive order halting deportation of kids who would qualify for the Dream Act. Those are people who've spent their lives in this country and are as American as any of us who hold the passport. Talk about collective punishment.

Brit Hume has been roundly chastised by fellow conservatives for suggesting that these kids deserve to be treated with decency. Even the fringey Glenn Beck is getting slammed hard, by his own admission, for his plan to take some food and supplies down to the border to help the children:

“Everybody is telling me I’m seeing subscriptions down; I’m seeing Mercury One donations down,” Beck said, growing emotional. “I’m getting violent emails from people who say I’ve ‘betrayed the Republic.’ Whatever. I’ve never taken a position more deadly to my career than this — and I have never, ever taken a position that is more right than this.”

This overtly cruel behavior by major right-wingers and their followers has been evident for some time. One could go back to the debates over the war on terror to see the outlines of it, with the vice president of the United States declaring that using the centuries-old form of torture known as waterboarding was a "no-brainer." (Or the president reportedly wondering who authorized giving pain medication to injured detainees, for that matter.) Granted, war is hell and cruelty is a built-in characteristic, but this country had up until then at least paid lip service to the international prohibitions against torture. The breaking of that taboo was remarkably easy in a time of conservative dominance.

But one needn't only look at the right's xenophobic desire to punish foreigners. They are equally cruel to their fellow Americans. Just yesterday former Senate candidate Todd Akin crawled out from under his rock with a new book proudly recanting his apology for comments in which he asserted that women didn't get pregnant from rape, implying that those who claimed this were liars. They insist that victims of incest should be forced to carry their own siblings to term. (Another taboo bites the dust.) And that's just one example of the brutal way the right treats pregnant women. For instance, what could be more cruel than to force women who know they are carrying a dead fetus to go through labor and childbirth simply in order to make a point about abortion? Yet, that's exactly what happens to families nowadays who face this tragedy after "partial birth" abortion ban.

All across the nation they are denying healthcare to the working poor in states where Republican are in the majority. They don't have to do this -- the costs are paid for by the federal government. It doesn't matter. They simply do not believe these people should have health insurance. (It's not as if these low-wage workers make enough money to afford it on their own -- in yet another example of right-wing cruelty this same population is being denied a raise in the minimum wage.) To see this cruel attitude illustrated in living color one only has to recall this exchange in the Republican presidential debates of 2012.

That's right. When the moderator asked Ron Paul -- a hard core opponent of any kind of government assistance for health care ---if we should simply let people die if they don't have health insurance, people in the audience enthusiastically yelled out "yes!"

So, it should come as no surprise that the next cruel attack on vulnerable Americans is to cut the federal disability program, which is run through the Social Security Administration. Darrell Issa's personal wrecking crew, also known as the House Committee on Oversight and Government Reform, took time away from Benghazi! and its Javert-like pursuit of former IRS commissioner Lois Lerner to issue a report claiming that the program is rife with waste and fraud and must be cut to the bone to restore America's trust. Here's what Senator Sherrod Brown had to say about this:

There is a quiet, covert war being waged on Social Security. The tactic? Divide and conquer.

They have made so-called “structural reforms” their goal. But it’s up to us to call it like it is: privatization. […]

We need to recognize these attacks for what they are—backdoor attempts to weaken Social Security by dismantling disability insurance.

And why not? Being cruel to people who are disabled and cannot work seems to be quite popular among Tea Party members, many of whom are disabled themselves (but, of course, they deserve their benefits while other do not.) Recall this nauseating display of cruelty during the healthcare debate.

At one point, a man with a sign saying he has Parkinson’s disease and needs help sat down in front of the reform opponents. Several protesters mocked the man, calling him a “communist,” with one derisively “throwing money at him.” “If you’re looking for a handout you’re in the wrong end of town,” another man said.

The facts about disability insurance are, unsurprisingly, quite different from the emotional rubbish Issa and his wrecking crew outlined in their report. One can only hope that the Democrats do not seek any more grand bargains or we will likely see many more disabled Americans sitting in the street -- only this time they'll be forced to beg for money the way they do in third-world countries. And undoubtedly right-wingers will be cruelly yelling in their faces, calling them names and telling them they aren't welcome here.

Perhaps the greatest irony in all this cruel behavior is the right's ostentation religiosity and alleged fealty to the teachings of the Bible. It would seem they missed a few Sunday school lessons along the way:

Take heed that ye despise not one of these little ones; for I say unto you, That in heaven their angels do always behold the face of my Father which is in heaven --- Matthew 18:10

"Speak up for those who cannot speak for themselves, for the rights of all who are destitute. Speak up and judge fairly; defend the rights of the poor and needy."