Martin O'Malley ups his game: The great politics of picking a border fight with Obama 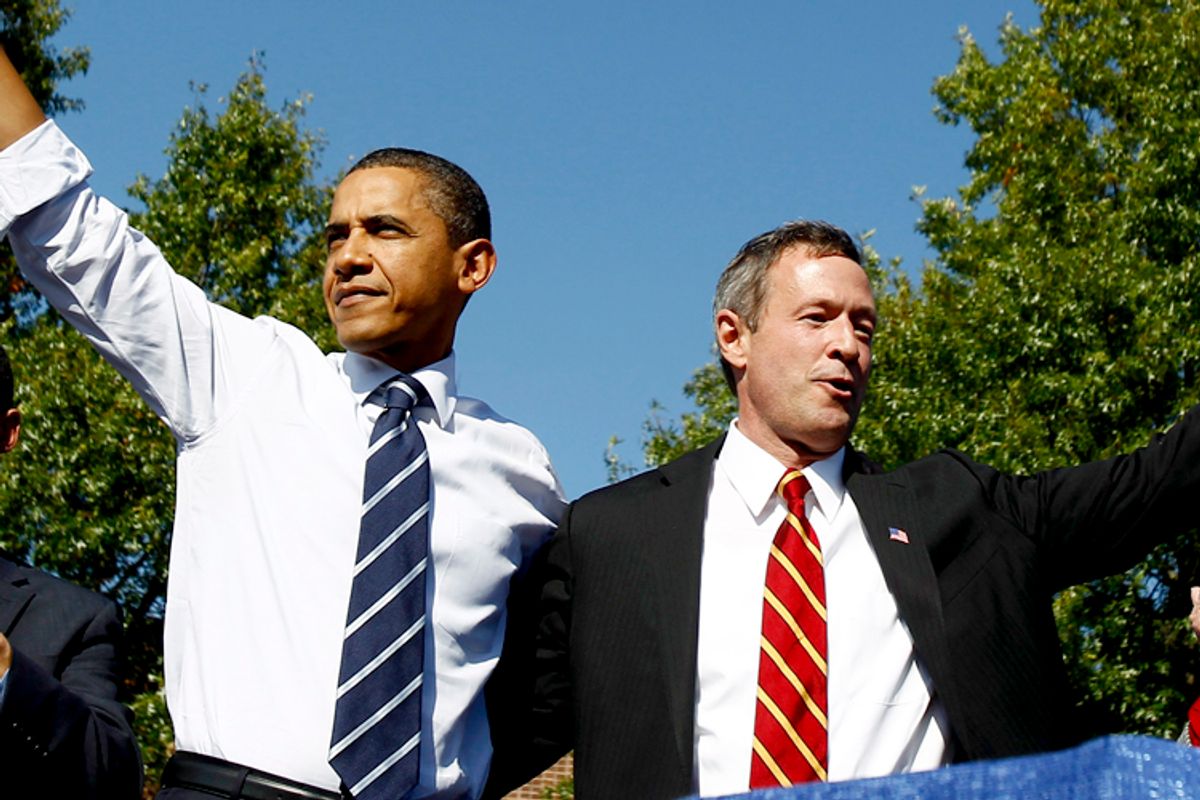 Up is down, left is right, night is day, and Martin O'Malley is ... getting some attention? In the context of the hot issue of the moment and its effect on 2016 presidential politics? What a strange new day it is.

Last we checked on the ambitious but thus far underwhelming Maryland governor, he was asking Hillary Clinton's permission to prepare a run for the presidency. (She said sure, go nuts, because who cares.) What kind of a floppy fish candidate does something like that?

But over the last few days, O'Malley's taken a more aggressive approach to position himself ahead of the 2016 elections. At a meeting for the National Governors Association, O'Malley urged humanity in dealing with the border refugee crisis and rejected pressure to speed up deportations of Central American children. "It is contrary to everything we stand for as a people to try to summarily send children back to death ... in a place where drug gangs are the greatest threat to stability, rule of law and democratic institutions in this hemisphere.”

O'Malley's call to welcome child refugees fleeing violence (imagine that!) separates him from the ever-cautious Obama administration's approach -- as well as that of Hillary Clinton, who's said the United States must "send a clear message [to Central American parents], just because your child gets across the border doesn’t mean your child gets to stay."

And in terms of winning attention, things are working out beautifully for O'Malley. He got the most coveted attention of all yesterday, in the form of a knife in the back from the White House.

Hours after the Maryland governor and prospective 2016 presidential candidate became the most prominent Democrat to criticize the White House on the issue, Domestic Policy Director Cecilia Muñoz called O’Malley to complain.

But before they hung up, O’Malley told Muñoz not to send any of the children to the facility in Westminster, Md., that the White House was looking at. It’s a conservative part of the state, he warned. The children were at risk of getting harassed, or worse, he said.

Let's just say that leaks about this call in which O'Malley was allegedly hypocritical and casually insulting to certain parts of Maryland probably didn't originate from the O'Malley camp. Indeed, O'Malley's team is pushing back, saying that "for weeks [O'Malley] has been actively working to find suitable places in Maryland for detained children," while confirming that he thought the Westminster site "might not be a hospitable environment."

O'Malley need not sweat over the White House's pushback. As CNN's Peter Hamby says, the fight puts him on the right side of the issue with the Democratic primary electorate and elevates his profile. And rest assured, the people of Westminster, Maryland, didn't care for O'Malley well before he suggested they may be knuckle-draggers. It's not like he has to run for reelection, anyway.

It's the White House that's in a tough political spot with liberals right now, which explains its fury at O'Malley. Over the last couple of weeks, as the refugee situation has been the most prominent story in political media, the White House has been calling for funds and changes to the law that would speed up the pace of deportations for these Central American child migrants. The main statute in question has been a 2008 law that offered extra legal protections to children fleeing Central American violence -- protections not granted to migrants from contiguous countries like Mexico, who can be turned away from the border in a matter of hours. The Obama administration is seeking changes to that law, as Homeland Security Secretary Jeh Johnson testified in Congress last week.

"In terms of changing the law," he said, "we're asking for the ability to treat unaccompanied kids from a Central American country in the same way as from a contiguous country." [...]

"People in Central America need to see illegal migrants coming back," Johnson said. "The children accompanied by their parents, and the unaccompanied adults. We're doing it, and lessening the time it takes to happen. So, we're asking for additional resources to turn those people around quicker."

Johnson and the administration appear to be getting what they wanted. Republican Sen. John Cornyn and Democratic Rep. Henry Cuellar, both of Texas, introduced a bill this week "that would modify the 2008 William Wilberforce Trafficking Victims Protection Reauthorization Act to treat undocumented children from Central America like those that come from Mexico."

Most members of the Congressional Hispanic Caucus have been urging the administration not to sign on to such a policy change, and their argument seems to be winning over congressional Democrats at large. Senate Majority Leader Harry Reid came out against the Cornyn-Cuellar plan yesterday. White House press secretary Josh Earnest bought time at yesterday's briefing, saying the administration will review the bill.

This isn't a great place for the White House to be. It expressed interest in these changes, but now that the changes have been proposed, Democratic allies on Capitol Hill are running for the hills. If the administration supports the bill, it will anger Democratic base members ahead of the midterms. If the administration comes out against the bill, it will have a tough time explaining its change of mind. (Obviously Republicans will call him a tyrant-terrorist trying to destroy America no matter what he does on this issue, or any other issue, ever.)

And so, if you're Martin O'Malley, it's absolutely great politics to exploit the hell out of this and place yourself on the proper side -- all without asking permission.