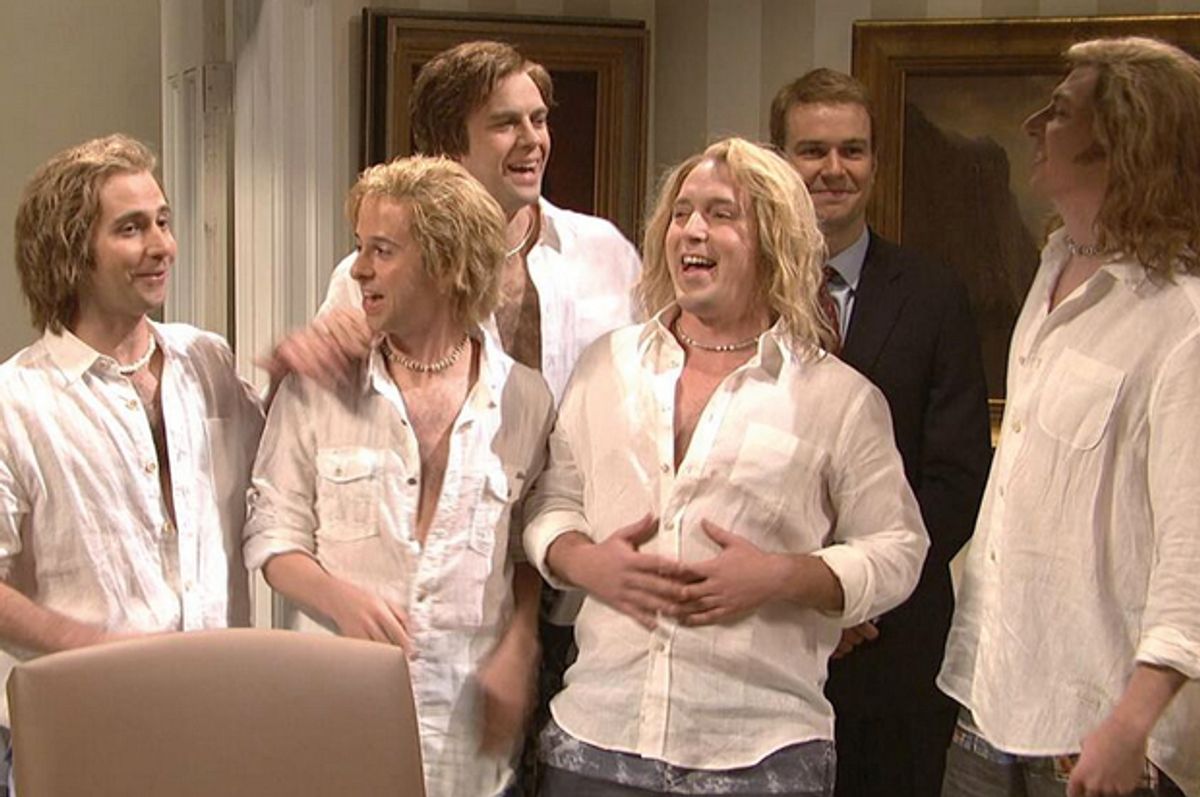 With Brooks Wheelan, Noel Wells and John Milhiser having departed the show after their first year, there’s a mass exodus happening at “Saturday Night Live” -- but the show itself predicted it.

In an interview with New York magazine this year, Lorne Michaels said that in casting the 39th season of “SNL,” “having lost Fred [Armisen], Jason Sudeikis, and Bill Hader and knowing I was losing Seth [Meyers], we were focused on finding guys.” And, man, did that focus come to fruition: The season began with six new cast members, five of them male (and, incidentally, all of them white). It was undeniably a rebuilding year, as we saw in the season premiere, when host Tina Fey -- who had worked with the new cast members all week -- was asked to decide who was a new cast member and who was a member of the band Arcade Fire. That self-consciousness carried through the season -- witness Kerry Washington’s superb hosting gig, which explicitly commented on the lack of black female cast members, or the much-publicized search that ended with midseason addition of Sasheer Zamata.

Whelan, Wells and Mihilser all got moments to shine: In Whelan’s case, it was in a bit as himself at the “Weekend Update” desk that only served to emphasize how out-of-place his stand-up was in sketches. (Surely more galling for his fans was Whelan’s appearance, also as himself, in a “Celebrity Family Feud” sketch -- the joke being that he was no one’s idea of a celebrity.) Wells peaked early with a great impersonation of Lena Dunham in a taped “Girls” sketch that, played more cannily -- maybe the “Lena Dunham Talk Show”? -- could have been a signature bit. And Mihilser got to dance with Lady Gaga, which was for this weird viewer one of the true highlights of a weak season.

So now the new white-male cast members from Season 39 are down to five (for those doing math at home, “Weekend Update” co-anchor Colin Jost was brought into the cast at midseason). But the memory of watching them gasp for airtime will be a lingering one. Wells had the misfortune of coexisting with a female cast of ringers -- Kate McKinnon, Cecily Strong, Vanessa Bayer and Nasim Pedrad among them. (Pedrad, who finally figured out a signature sketch with her motivational speaker Heshy, is departing of her own volition to appear on the new Fox sitcom “Mulaney.”)

But give or take a Kenan Thompson, whose extreme longevity can sometimes veer into exhaustion, there’s no defining male star of the “SNL” cast. Milhiser and Whelan were fairly explicitly brought in for a “Hunger Games” with Mike O’Brien (formerly a writer for the show) and Kyle Mooney and Beck Bennett (who picked up the departed Andy Samberg’s slack with self-consciously outré taped bits).

There have been past moments when the cast has had to reconstitute itself: In his monologue near the end of the 2005-06 season, host Tom Hanks told Jason Sudeikis, "You're one of the new guys? Sudeikis? Well, I'm sure we'll see you in September." Sudeikis, Bill Hader, Andy Samberg and Kristin Wiig were then all relatively recent additions. But somehow -- if only because social media wasn’t dissecting a show meant to air and then vanish into the ether -- there wasn’t quite such a palpable sense that one man’s spot on the air was taking away someone else's.

Maybe bringing on a smaller number of new cast members  -- instead of a gaggle of similar-looking alternates -- could have helped with the strangeness of seeing all these guys trotted out and then summarily dispatched with. Or it could have helped to hire Zamata earlier on, to avoid the sense that the show was solely interested in test-driving white male cast members. Or, most likely, this odd moment will end up as just one of those “SNL” moments only historians and trivia buffs will remember 10 years on, when Beck Bennett is being set up with his Lorne Michaels-produced sitcom.