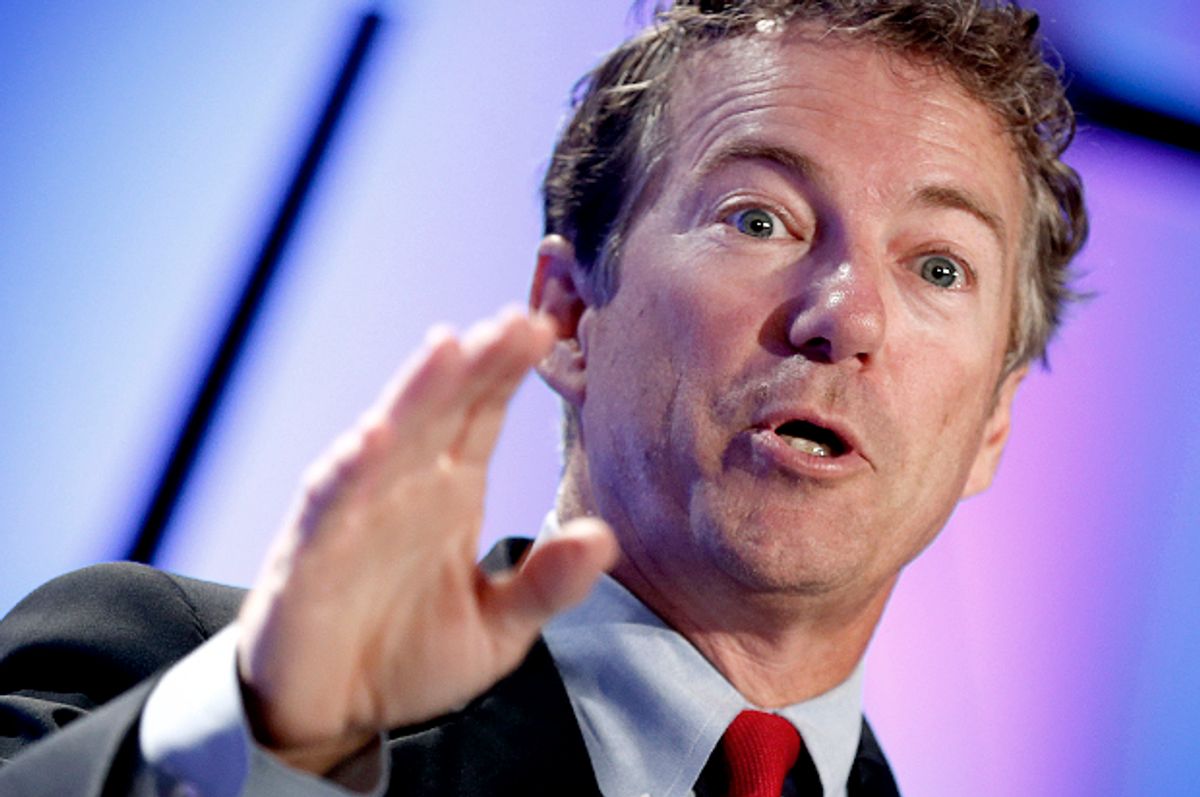 Sen. Rand Paul is getting lots of credit on the left for co-sponsoring needed criminal justice reform with Democrat Cory Booker. But at the same time, he’s running away from one of the only other policy stands that made him interesting beyond the Tea Party: his skepticism about U.S. foreign policy, including our lavish and unblinking support for Israel.

In the last few months, Paul has swung wildly on the issue, becoming even more hawkish than AIPAC. The man who once advocated cutting all aid to Israel now supports an aid hike, and instead wants to cut off aid to the Palestinian Authority. Yet Paul’s “Stand with Israel Act” is opposed by AIPAC as too extreme, though it’s backed by the far-right Zionist Organization of America.

On Friday he supported a Senate resolution backing Israel that passed by unanimous consent in the wake of the lamentable ground strike in Gaza – while arguing it didn’t go far enough. “I want more teeth in this,” he told The Hill, urging the Senate to take up his bill de-funding the Palestinian Authority.

There may be no better sign that Paul is running for president in 2016 than his craven flip-flop on Israel. But his transformation has been so extreme that it suggests Paul and his allies harbor a cartoonish view of pro-Israel political power.

His stance on Israel has dogged him among conservatives. In the wake of Mitt Romney’s 2012 loss Commentary’s Jonathan Tobin sounded the alarm on a possible Paul presidential candidacy. His attacks on aid to Israel as “welfare to a wealthy nation” and his isolationism generally should scare Israel’s allies, Tobin argued. In a sign of his 2016 ambition, Paul tried to mend fences with Commentary with a long reply. It highlighted his opposition to U.S. foreign aid generally, arguing that the U.S. gives more aid, collectively, to Israel’s enemies than to Israel. It closed: “Israel has long been, and will continue to be, one of our greatest allies. I will always fight to maintain the health and strength of this relationship.”

On a visit to Israel shortly after that, he condemned the Obama administration for its opposition to new Jewish settlements, insisting Israel’s policy was “none of our business.” He told reporters: “I came here to show that I am supportive of the relationship between Israel and America.”

Seth Lipsky was impressed, writing in the New York Post, “There hasn’t been such a supportive comment on Israel’s settlements in the West Bank and in Jerusalem since Sarah Palin last spoke on the subject.” High praise indeed.

I think some within the Christian community are such great defenders of the promised land and the chosen people that they think war is always the answer, maybe even preemptive war. And I think it’s hard to square the idea of a preemptive war and, to me, that overeagerness [to go to] war, with Christianity.

But this month, Paul’s metamorphosis seems complete. In a National Review op-ed July 1, Paul attacked the Obama administration for calling for “restraint” after the murder of three Israeli teenagers by Palestinian extremists. The language is laughably overheated:

I think it is clear by now: Israel has shown remarkable restraint. It possesses a military with clear superiority over that of its Palestinian neighbors, yet it does not respond to threat after threat, provocation after provocation, with the type of force that would decisively end their conflict.

But sometimes restraint can work against you. Sometimes you just have to say, enough is enough.

Reliable neocon establishmentarian Jennifer Rubin attacked Paul for defying AIPAC with his PA-cutoff plan, which she called a “phony pro-Israel bill.” But he won over Tobin, at least partly. Though the Commentary columnist saw the bill as Paul trying to “pander to pro-Israel Jewish voters and donors in preparation for his expected 2016 run for president,” he liked Paul’s toughness. “It’s time to start holding the PA accountable for its behavior. What’s too bad is that Paul, of all people, seems to be the only one ready to do so.”

Thus it wound up that on Friday, the former critic of Israel was deriding a unanimous Senate resolution supporting Israel as needing “more teeth.”

But the lusty neocons over at the Washington Free Beacon might have found the ultimate proof of Paul’s revisionism on Israel. They say he’s purged his website of an “anti-Israel” reading list. Among the missing books? His father’s. “A Foreign Policy of Freedom” featured Ron Paul denouncing the first President Bush for his “Christian-Zionist-oil crusade against the infidels.”

In it, Paul wrote:

It is amazing that the clamor of support for Israel here at home comes from men of deep religious conviction in the Christian faith who are convinced they are doing the Lord’s work. That, quite frankly, is hard for me as a Christian to comprehend.

Sounds just like his son’s comment about arming the Syrian rebels. It’s hard to know what to believe about Paul’s politics right now, except he’s certainly running for president.