Rise of the Christian left: Why the religious right's moment may be ending

From Pope Francis to a generation with new priorities, the finest Christian traditions are being reinvigorated 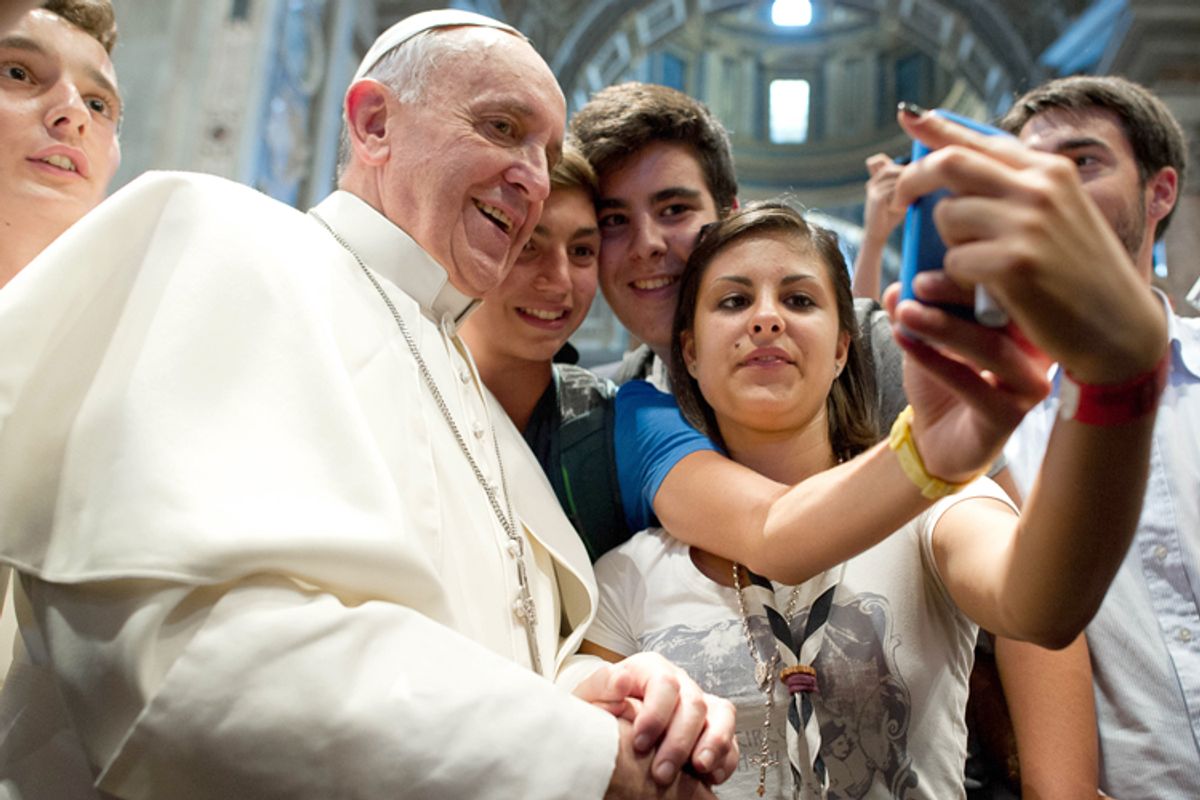 It’s hard to tell if the near-constant stream of millennial-centric political think-pieces are perpetuating or reflecting growing curmudgeonly fears about the future of the country. Maybe it’s a little of both, and Fox is probably observing within its competency when it pegs more than a handful of us as "deluded narcissists" --  but it appears there’s room for some political optimism among all the moral panic and the reign of the religious right. With millennial religious and political attitudes in flux compared to our predecessors, the upcoming years could be the Christian left’s big moment.

Which isn’t to say the United States has no Christian left history — with Civil Rights and the heyday of Catholic labor in our past, there is healthy precedent — but for the millennial growing up in the age of Jesus Camp and ‘Teach the Controversy’, Christian political activity has almost always veered rightward. Yet if the Culture Wars are losing momentum in light of issues like unemployment — which 76% of millennials identified as a critical issue in a 2012 Public Religion Research Institute survey, compared with 22% who found abortion or same sex marriage critical — how will Christian millennials fall out politically?

One thing seems clear: however they align themselves, it won’t be along typical partisan lines. A recent Reason-Rupe poll of young Americans found millennials to be, in the words of Nick Gillespie, tired of  “partisan crap,” which more or less covers it. The Reason-Rupe findings track well with the 2012 PRRI results linked above, which concluded that 45% of young people identify as independent, with only 33% calling themselves Democrats, and 23% Republican. While Reason-Rupe concludes its report hoping millennials’ anti-partisan tendencies will eventually lead them to a kind of libertarianism — socially liberal and fiscally conservative — as it stands, the young favor a variety of policies that tend to the economic left, with majorities generally favoring government guaranteed living wages, health insurance and food and shelter. Nonetheless, roughly a quarter consider themselves some kind of social conservative, and 40% call themselves socially liberal, with the remainder suspended somewhere in the murky middle.

One way to interpret the seemingly disparate interests of millennials — guaranteed existence minimums on one hand, lower taxes and fractured social issues on the other — is to imagine us as a cohort of politically schizophrenic pajama boys with an entitlement complex and little understanding of how policy works. Another explanation is that the young are merely more attached to their personal ideological commitments, regardless of whether or not they fall along traditional party lines. Along with Gillespie, I think this latter interpretation is right.

This reading is especially credible in light of this year’s Pew Forum political typology report. Pew split Americans by cohesion in values and goals rather than party affiliation, and came up with eight types, including the “faith and family left.” The most racially diverse of the eight types, the faith and family left represents a fascinating innovation on American political sorts, and led Michael Dimock, vice president of the Pew Research Center to observe that “the caricature that all religious people are Republican is just not true.” Whether or not the faith and family left has roped in a sizable constituency of young people just yet, the mere establishment of such a typology on the political landscape could be just the ticket to a new direction for the green set. Why?

According to “Faith in Equality: Economic Justice and the Future of Religious Progressives,” a report released in April of this year by the Brookings Institute, partisan polarization has represented an enormous blockage to religious leftist political engagement up until now:

The staunchly conservative views of the religious right and its unabashed support for the Republican Party has created an expectation in both parties that the faith-based constituencies supporting them on certain issues will act as uncritical supporters of their platforms as a whole. Faith leaders—and this is not unique to either side—often feel they risk losing access to policymakers if they refuse to support the party line on specific issues. “In both parties, the false expectation is that the faith community is supposed to be cheerleaders or chaplains,” Carr said. As a result, he continued, “to have both agreements and disagreements” comes to be seen as “unnatural activity.”

But this obtains only insofar as parties are calling the shots, and parties call the shots only insofar as people are willing to support them, vote the way they’re told, and pump money into them. If the Reason-Rupe and PRRI reports are right, millennials just might be opting out of the partisan approach to politics altogether, which means the partisan leash on religious constituencies might just be fraying. This makes coalitions like the faith and family left — which has commitments all across the political spectrum, founded in faith rather than political expediency — seem a lot more viable in the long run. In short, the weaker the partisan system becomes, the more nuanced the religious story about politics can become. And this means prime time for the Christian left to re-enter the political stage.

And what a smashing re-entry we’re set for, with figures like Pope Francis casually backhanding capitalism and corporate greed in graceful continuity with his praise of family life, solidarity and a culture of life. At this very moment, different factions of the religious left are duking it out over Obama’s proposed executive order banning discrimination against LGBT workers on behalf of federal contractors, and though the diversity of the religious left might concern some, the big picture is that the religious left is a growing force for political influence. As time passes and the mantle of political participation passes from prior partisan generations down to millennials, we might see that influence continue to grow, re-invigorating some of the finest features of the Christian tradition: to resist categorization, pull hard for the oppressed and downtrodden and insist upon hope while coping with the realities of power.