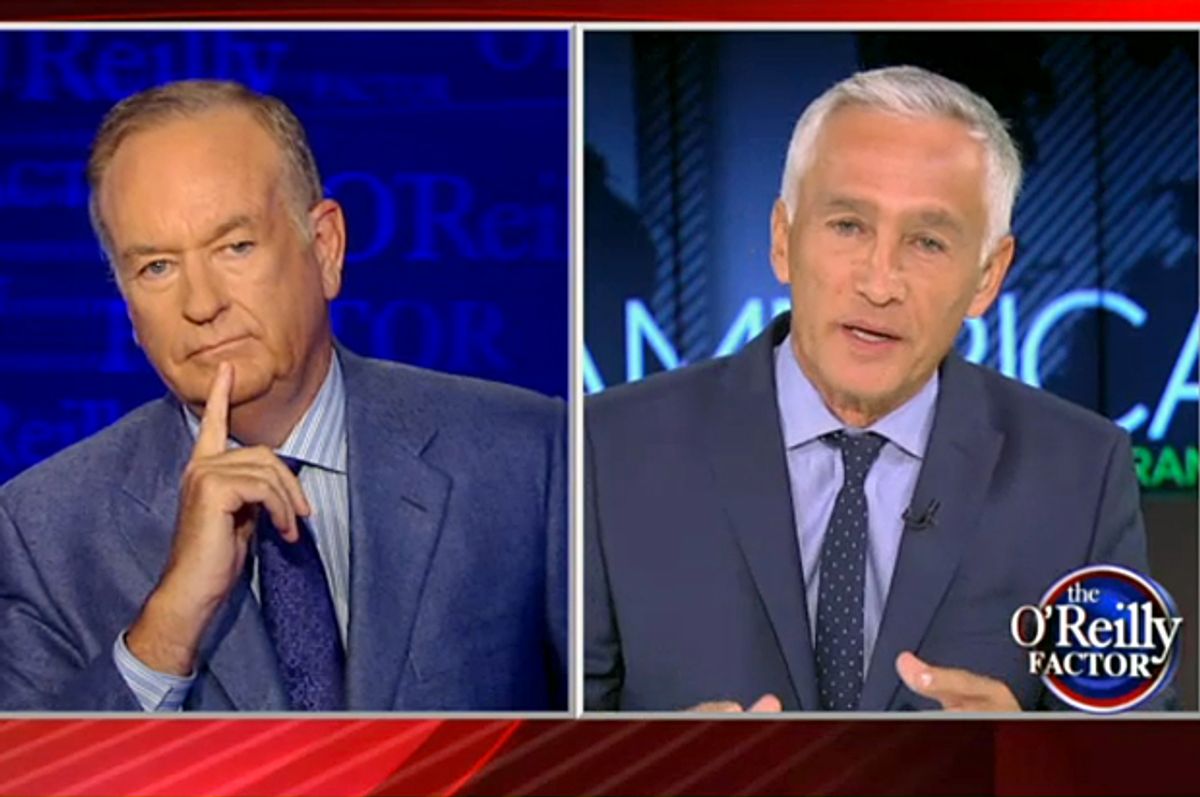 Joining ill-informed xenophobe and noted fiction author Bill O'Reilly for his Fox News show on Tuesday, Univision's star anchor Jorge Ramos inevitably found himself in the position of explaining to Papa Bear why his ideas about how to secure the U.S.'s southern border are terrible and wrong.

After explaining to O'Reilly what it was like to swim across the Rio Grande (as many people illegally entering the U.S. in order to escape violence in Central America do, despite the risk of drowning), Ramos noted that most of the young people who have arrived at the border have risked their lives to do so because they believe the U.S. will not deport children.

"O.K.," O'Reilly said, with evident condescension, "but we do and we will." Ramos then noted how, relatively speaking, very few children are deported by U.S. authorities, a fact that O'Reilly proclaimed "will have to change, because the unintended consequences are overwhelming."

Attempting to buttress his point, O'Reilly argued that nearly the entirety of Central and South America is falling apart and overrun by gangs, and that as a consequence the U.S. "simply cannot absorb all the world's children."

This was a point Ramos was happy to concede, no doubt aware that the number of children in the world is in the billions (and that Central and South America do not constitute the entire world). "I understand that," Ramos responded, "but those who are already here, we've got to protect them."

O'Reilly half-agreed, being willing to go so far as to say that during unspecified "hearings" that he believes must be conducted to determine whether migrant children at the border will be deported, authorities should certainly "take into consideration" whether or not the deportation is likely to lead to the children being murdered.

Before O'Reilly could further display his enormous capacity for empathy and human decency, however, Ramos interrupted, claiming that "deportation is not a solution" to the border crisis. "I don't think the government should be in the business of deporting endangered children," he added. "That's not the American way — that's not the Christian way."

O'Reilly next returned to his iron-tight argument that because there are endangered children elsewhere in the world ("every child in Africa" is in danger, apparently) the U.S. has no choice but to deport children currently at its border, potentially to their death. From here, O'Reilly then transitioned to criticizing Ramos for opposing O'Reilly's plan of flooding the border with members of the National Guard. This was very troubling, O'Reilly told Ramos.

"To send the National Guard," Ramos said in response, "I think it's absurd, I think it's useless, I think it's expensive. These children are not a security concern for the United States. They're not terrorists, they're not criminals, and they are being detained."

O'Reilly then, for at least the second time, said, "Look, Jorge," before asking for the chance to "make [his] case" before Ramos tried to "refute" it. O'Reilly then reiterated his laughably terrible plan to "solve" the issue of illegal immigration to the United States. Ramos next explained why O'Reilly's plan was worthless — but, believe it or not, his message didn't quite get through.

You can watch Ramos — or "Look, Jorge," as apparently he prefers to be called — on O'Reilly's show below, via Media Matters: