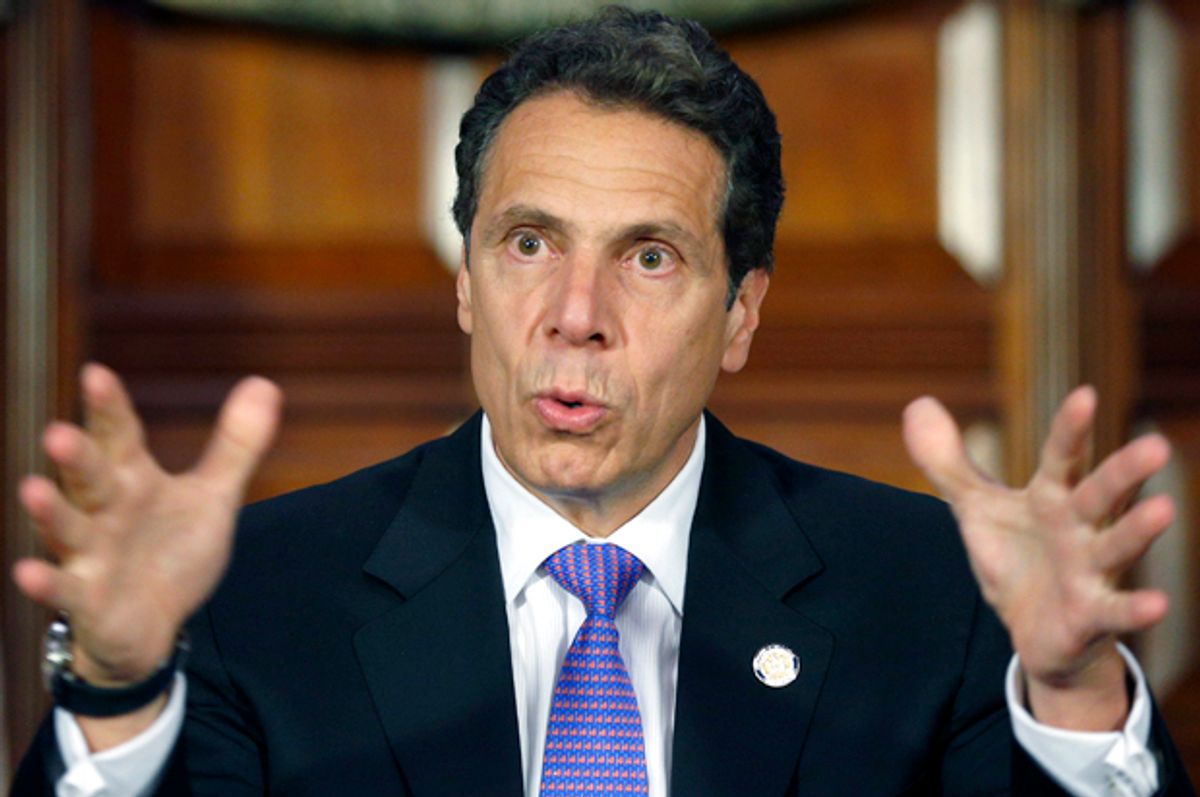 According to a new bombshell report in the New York Times, New York Gov. Andrew Cuomo, widely expected to coast to reelection this fall and long rumored to have presidential ambitions, is under federal investigation for allegedly trying to thwart his own anti-corruption commission after it began looking at his political allies.

The Times report begins with the most egregious example of Cuomo's office inappropriately meddling with the commission, a case in which a senior Cuomo aide, Lawrence Schwarz, found out the group had issued subpoenas to a media-buying firm with close ties to the state's Democratic Party — Cuomo included.

"This is wrong," Schwartz reportedly told one of the commission's three co-chairs, William Fitzpatrick, who is the district attorney in Syracuse. “Pull it back.”

Fitzpatrick is said to have done just that, and a panel investigator, explaining the decision to the other two co-chairs, emailed that the firm "apparently produced ads for the governor.”

After 9 months, Cuomo disbanded the commission, despite the fact that most expected it to be operational for a year and a half. And it never even attempted to investigate Cuomo himself.

The Times report is lengthy and detailed and should be read in full. But here's a representative example of Cuomo's office's alleged behavior, an incident involving the Real Estate Board of New York, an immensely wealthy and powerful trade group that includes many of Cuomo's most generous and enthusiastic financial supporters:

According to a subpoena that had been prepared, investigators wanted to examine the real estate board’s political donations, its materials related to a valuable tax break for new housing, and its communications with public officials, including phone calls with lawmakers.

[The commission’s executive director] Ms. Calcaterra repeatedly pressed [chief of investigations] Ms. Perry not to serve the subpoena, emails show. Yet the commission backed Ms. Perry, and on Aug. 19, she wrote to the co-chairs that she would be sharing a subpoena with them “shortly.”

Whereupon Mr. Cuomo’s office stepped in to shut it down.

Mr. Schwartz, the secretary to the governor, telephoned one of the commission’s three leaders in a fury, according to four people briefed on the call. There would be no subpoena to the real estate board, he said.

Ultimately, the commission merely sent the real estate board a letter asking it to provide information voluntarily, which it did.

In response to the Times' report, Cuomo's office released a 13-page letter disputing its allegations. One of its lead arguments is that the commission, which Cuomo announced to great fanfare — proclaiming during a press event that it would "go a long way towards restoring [the] public trust" — was never truly independent from his office.