The plot to destroy education: Why technology could ruin American classrooms — by trying to fix them 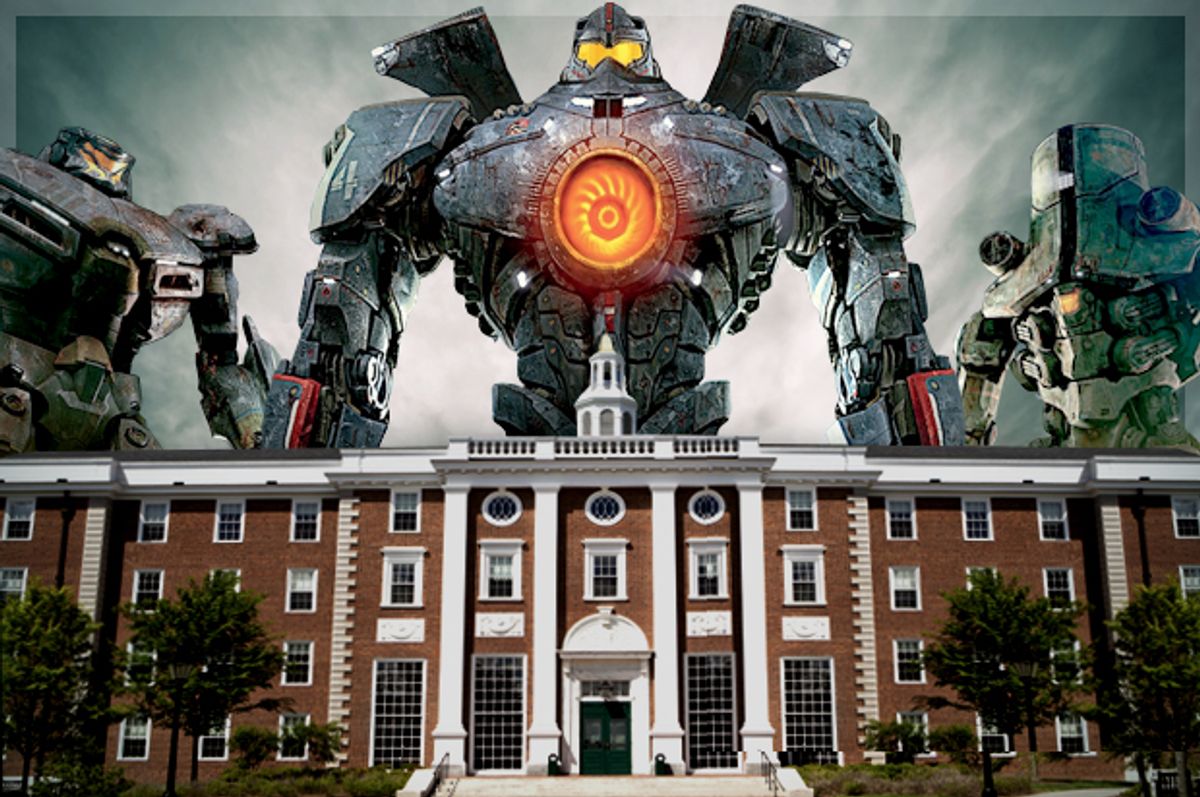 How does Silicon Valley feel about college? Here's a taste: Seven words in a tweet provoked by a conversation about education started by Silicon Valley venture capitalist Marc Andreeseen.

The $400 billion a year that Americans pay for education after high school is being wasted on an archaic brick-and-mortar irrelevance. We can do better!

But how? The question becomes more pertinent every day -- and it's one that Silicon Valley would dearly like to answer.

The robots are coming for our jobs, relentlessly working their way up the value chain. Anything that can be automated will be automated. The obvious -- and perhaps the only -- answer to this threat is a vastly improved educational system. We've got to leverage our human intelligence to stay ahead of robotic A.I.! And right now, everyone agrees, the system is not meeting the challenge. The cost of a traditional four-year college education has far outpaced inflation. Student loan debt is a national tragedy. Actually achieving a college degree still bequeaths better job prospects than the alternative, but for many students, the cost-benefit ratio is completely out of whack.

No problem, says the tech industry. Like a snake eating its own tail, Silicon Valley has the perfect solution for the social inequities caused by technologically induced "disruption." More disruption!

Universities are a hopelessly obsolete way to go about getting an education when we've got the Internet, the argument goes. Just as Airbnb is disemboweling the hotel industry and Uber is annihilating the taxi industry, companies such as Coursera and Udacity will leverage technology and access to venture capital in order to crush the incumbent education industry, supposedly offering high-quality educational opportunities for a fraction of the cost of a four-year college.

There is an elegant logic to this argument. We'll use the Internet to stay ahead of the Internet. Awesome tools are at our disposal. In MOOCs -- "Massive Open Online Courses" -- hundreds of thousands of students will imbibe the wisdom of Ivy League "superprofessors" via pre-recorded lectures piped down to your smartphone. No need even for overworked graduate student teaching assistants. Intelligent software will take care of the grading. (That's right -- we'll use robots to meet the robot threat!) The market, in other words, will provide the solution to the problem that the market has caused. It's a wonderful libertarian dream.

But there's a flaw in the logic. Early returns on MOOCs have confirmed what just about any teacher could have told you before Silicon Valley started believing it could "fix" education. Real human interaction and engagement are hugely important to delivering a quality education. Most crucially, hands-on interaction with teachers is vital for the students who are in most desperate need for an education -- those with the least financial resources and the most challenging backgrounds.

Of course, it costs money to provide greater human interaction. You need bodies -- ideally, bodies with some mastery of the subject material. But when you raise costs, you destroy the primary attraction of Silicon Valley's "disruptive" model. The big tech success stories are all about avoiding the costs faced by the incumbents. Airbnb owns no hotels. Uber owns no taxis. The selling point of Coursera and Udacity is that they need own no universities.

But education is different than running a hotel. There's a reason why governments have historically considered providing education a public good. When you start throwing bodies into the fray to teach people who can't afford a traditional private education you end up disastrously chipping away at the profits that the venture capitalists backing Coursera and Udacity demand.

And that's a tail that the snake can't swallow.

The New York Times famously dubbed 2012 "The Year of the MOOC." Coursera and Udacity (both started by Stanford professors) and an MIT-Harvard collaboration called EdX exploded into the popular imagination. But the hype ebbed almost as quickly as it had flowed. In 2013, after a disastrous pilot experiment in which Udacity and San Jose State collaborated to deliver three courses, MOOCs were promptly declared dead -- with the harshest schadenfreude coming from academics who saw the rush to MOOCs as an educational travesty.

At the end of 2013, the New York Times had changed its tune: "After Setbacks, Online Courses are Rethought."

But MOOC supporters have never wavered. In May, Clayton Christensen, the high priest of "disruption" theory, scoffed at the unbelievers: "[T]heir potential to disrupt — on price, technology, even pedagogy — in a long-stagnant industry," wrote Christensen, " is only just beginning to be seen."

At the end of June, the Economist followed suit with a package of stories touting the inevitable "creative destruction" threatened by MOOCs: "[A] revolution has begun thanks to three forces: rising costs, changing demand and disruptive technology. The result will be the reinvention of the university ..." It's 2012 all over again!

Sure, there have been speed bumps along the way. But as Christensen explained, the same is true for any would-be disruptive start-up. Failures are bound to happen. What makes Silicon Valley so special is its ability to learn from mistakes, tweak its biz model and try something new. It's called "iteration."

There is, of course, great merit to the iterative process. And it would be foolish to claim that new technology won't have an impact on the educational process. If there's one thing that the Internet and smartphones are insanely good at, it is providing access to information. A teenager with a phone in Uganda has opportunities for learning that most of the world never had through the entire course of human history. That's great.

But there's a crucial difference between "access to information" and "education" that explains why the university isn't about to become obsolete, and why we can't depend -- as Marc Andreessen tells us -- on the magic elixir of innovation plus the free market to solve our education quandary.

Nothing better illustrates this point than a closer look at the Udacity-San Jose State collaboration.

When Gov. Jerry Brown announced the collaboration between Udacity, founded by the Stanford computer science Sebastian Thrun and San Jose State, a publicly funded university in the heart of Silicon Valley, in January 2013, the match seemed perfect. Where else would you want to test out the future of education? The plan was to focus on three courses: elementary statistics, remedial math and college algebra. The target student demographic was notoriously ill-served by the university system: "Students were drawn from a lower-income high school and the underperforming ranks of SJSU's student body," reported Fast Company.

The results of the pilot, conducted in the spring of 2013, were a disaster, reported Fast Company:

Among those pupils who took remedial math during the pilot program, just 25 percent passed. And when the online class was compared with the in-person variety, the numbers were even more discouraging. A student taking college algebra in person was 52 percent more likely to pass than one taking a Udacity class, making the $150 price tag--roughly one-third the normal in-state tuition--seem like something less than a bargain.

A second attempt during the summer achieved better results, but with a much less disadvantaged student body; and, even more crucially, with considerably greater resources put into human interaction and oversight. For example, San Jose State reported that the summer courses were improved by "checking in with students more often."

But the prime takeaway was stark. Inside Higher Education reported that a research report conducted by San Jose State on the experiment concluded that "it may be difficult for the university to deliver online education in this format to the students who need it most."

In an iterative world, San Jose State and Udacity would have learned from their mistakes. The next version of their collaboration would have incorporated the increased human resources necessary to make it work, to be sure that students didn't fall through the cracks. But the lesson that Udacity learned from the collaboration turned out be something different: There isn't going to be much profit to be made attempting to apply the principles of MOOCs to students from a disadvantaged background.

Thrun set off a firestorm of commentary when he told Fast Company's Max Chafkin this:

"These were students from difficult neighborhoods, without good access to computers, and with all kinds of challenges in their lives," he says. "It's a group for which this medium is not a good fit...."

"I'd aspired to give people a profound education--to teach them something substantial... But the data was at odds with this idea."

Thrun later claimed that his comments were misinterpreted by Fast Company. And in his May Op-Ed Christensen argued that Udacity's pivot was a boon!

Udacity, for its part, should be applauded for not burning through all of its money in pursuit of the wrong strategy. The company realized — and publicly acknowledged — that its future lay on a different path than it had originally anticipated. Indeed, Udacity’s pivot may have even prevented a MOOC bubble from bursting.

Educating the disadvantaged via MOOCs is the wrong strategy? That's not a pivot -- it's an abject surrender.

The Economist, meanwhile, brushed off the San Jose State episode by noting that "online learning has its pitfalls." But the Economist also published a revealing observation: "In some ways MOOCs will reinforce inequality ... among students (the talented will be much more comfortable than the weaker outside the structured university environment) ..."

But isn't that exactly the the problem? No one can deny that the access to information facilitated by the Internet is a fantastic thing for talented students -- and particularly so for those with secure economic backgrounds and fast Internet connections. But such people are most likely to succeed in a world full of smart robots anyway. The challenge posed by technological transformation and disruption is that the jobs that are being automated away first are the ones that are most suited to the less talented or advantaged. In other words, the population that MOOCs are least suited to serving is the population that technology is putting in the most vulnerable position.

Innovation and the free market aren't going to fix this problem, for the very simple reason that there is no money in it. There's no profit to be mined in educating people who not only can't pay for an education, but also require greater human resources to be educated.

This is why we have public education in the first place.

"College is a public good," says Jonathan Rees, a professor at Colorado State University who has been critical of MOOCs. "It's what industrialized democratic society should be providing for students."