Bank of America and others claim they want to offer poor people low-cost banking services. Don't hold your breath 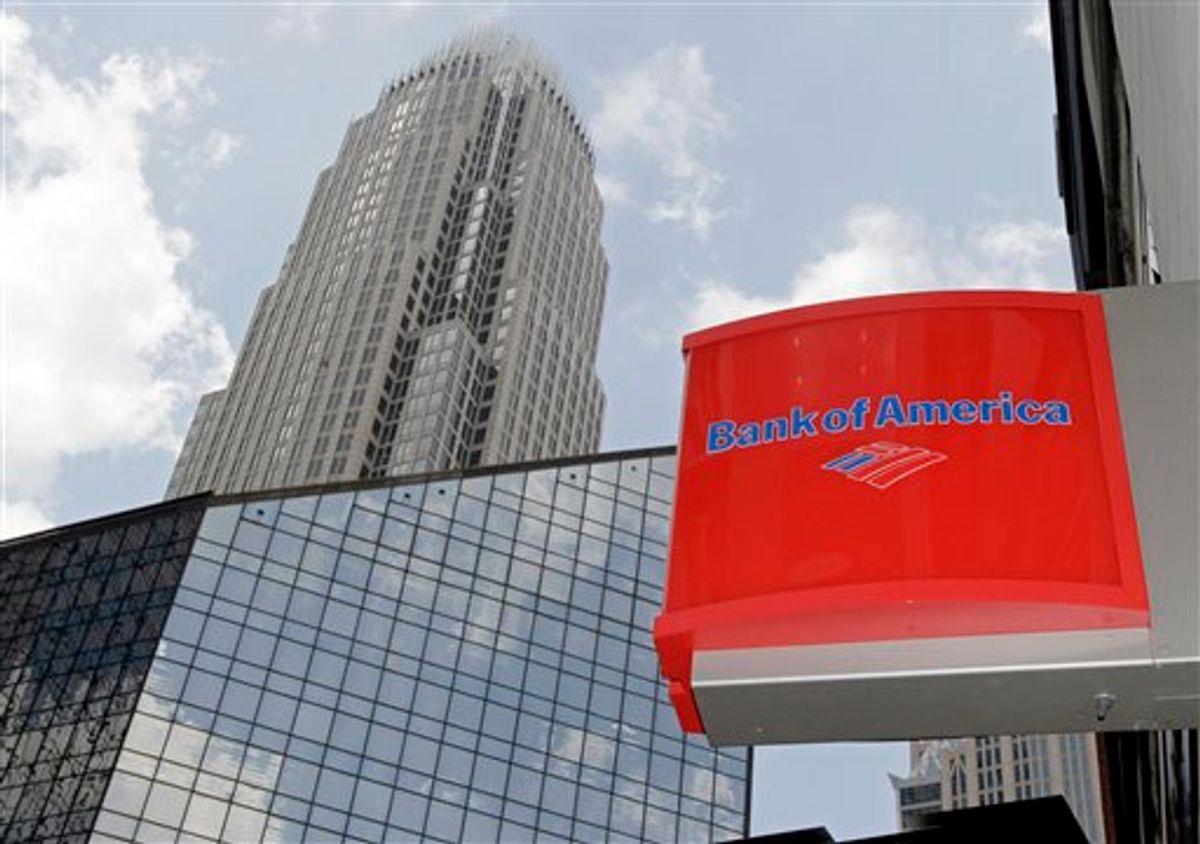 How do we hate thee, Bank of America? Let us count the ways.

We hate thee for thy mortgage misdeeds, foreclosure frauds and grotesque fees. For unnecessarily kicking people out of their homes, extorting money from military families through predatory loan rates, and treating thy customers like garbage.

For basically being too-big-to-fail/too-big-to-jail blight on the economy and society thou hast proven to be, time and again.

Bank of America has earned itself the worst reputation of any big lender in the U.S., and that is no small feat. The megabank has incurred so many legal costs for its various frauds and abuses, to the tune of billions, its profits have seen a dip. Whatever is a big bank to do?

Under increasing pressure from regulators and widely despised by the public, Bank of America now wants us to believe hat it will make nice with poor people. In a recentreportin the New York Times, we learn that BofA and other giant banks are trying to launder their public images by talking about offering low-fee services to people who have been left out of the banking system. BofA has launched a banking account it claims is intended to prevent troubled customers from running up fees for overdrawing their balances.

That’s very interesting, because so far, its accounts have been designed to do the opposite, which is why a lot of poor people don’t have bank accounts in the first place.

BofA’s public campaign showing us its touchy-feely side involves asking low-income people to create collages representing their emotions about money. One image shows a woman who appears to be naked wearing nothing but words like “power,” “want” and “desire” scrawled across her skin.

Other banks like JPMorgan, are following suit with lower-cost prepaid debit cards, checking accounts and whatnot. As the Times points out, it’s a bit difficult to start cheering:

"It is hard not to be skeptical, particularly because the banks, most recently in the subprime housing crisis, have traditionally wrung vast profits from some of these same customers, who paid steep rates for loans and high fees on basic checking accounts.”

You can say that again.

So here’s the real deal. Under the scrutiny of regulators, these banks have gotten cautious, so they’re trotting out a couple of products that are somewhat less rapacious than their normal fare (nonsensical fees still apply, they’re just lower). We’re guessing that the minute the regulators turn the other way, many of these targeted low-income customers will find themselves hit by some unexpected fee hikes that will send them right back where they came from, the land of the unbanked.

That’s how things roll in the oliogopoly that is the American banking system, where customers have the illusion of choice, but in reality face an industry dominated by a few gigantic players who decide how much abuse they can get away with at any given time. Bank of America is sort of like the lead dog in a small pack of rabid animals constantly scouring the landscape for prey. Whatever it signals, the rest will do, and the most vulnerable customers will be ripped, chewed and spit out.

According to Mehrsa Baradaran, an assistant law professor at the University of Georgia, more than one out of four Americans either don’t have a bank account or do have one, but primarily rely on unscrupulous check-cashing storefronts, payday lenders, title lenders, or pawnshops to survive. In her view, the best option for them would be to do their banking through the U.S. postal system. Elizabeth Warren, and many other progressives, have gotten on board with this idea.

Sounds kind of odd, until you consider that the post office comes with several advantages and an infrastructure that makes it uniquely suited to this role. For example, it has branches in many low-income neighborhoods that were long ago abandoned by private banks. Also, people have a sense of familiarity and comfort with the postal service that they will never have with the likes of BofA or JPMorgan. Post offices already offer financial services like money orders, and postal banks could add things like savings accounts, debit cards and even simple loans, without relying on a profit model that takes advantage of people.

This is not a new idea. Baradaran notes that in 1910, President William Howard Taft created a government-backed postal savings system for recent immigrants and the poor, which lasted until 1967. Unfortunately, times changed as private banks got bigger and more powerful, and the poor were pretty much thrown to the financial wolves:

“By the 1990s, there were essentially two forms of banking: regulated and insured mainstream banks to serve the needs of the wealthy and middle class, and a Wild West of unregulated payday lenders and check-cashing joints that answer the needs of the poor — at a price.”

In a world in which cash is increasingly becoming obsolete, the poor urgently need financial services. But believing that giant banks operating in oligopolistic conditions and thinking of little beyond profit maximization are the answer is nothing more than a fairy tale. One that ends badly for those who can least afford to lose.