It's a tragedy that Bowlen has Alzheimer’s -- but for the football community, it should be a lesson, too 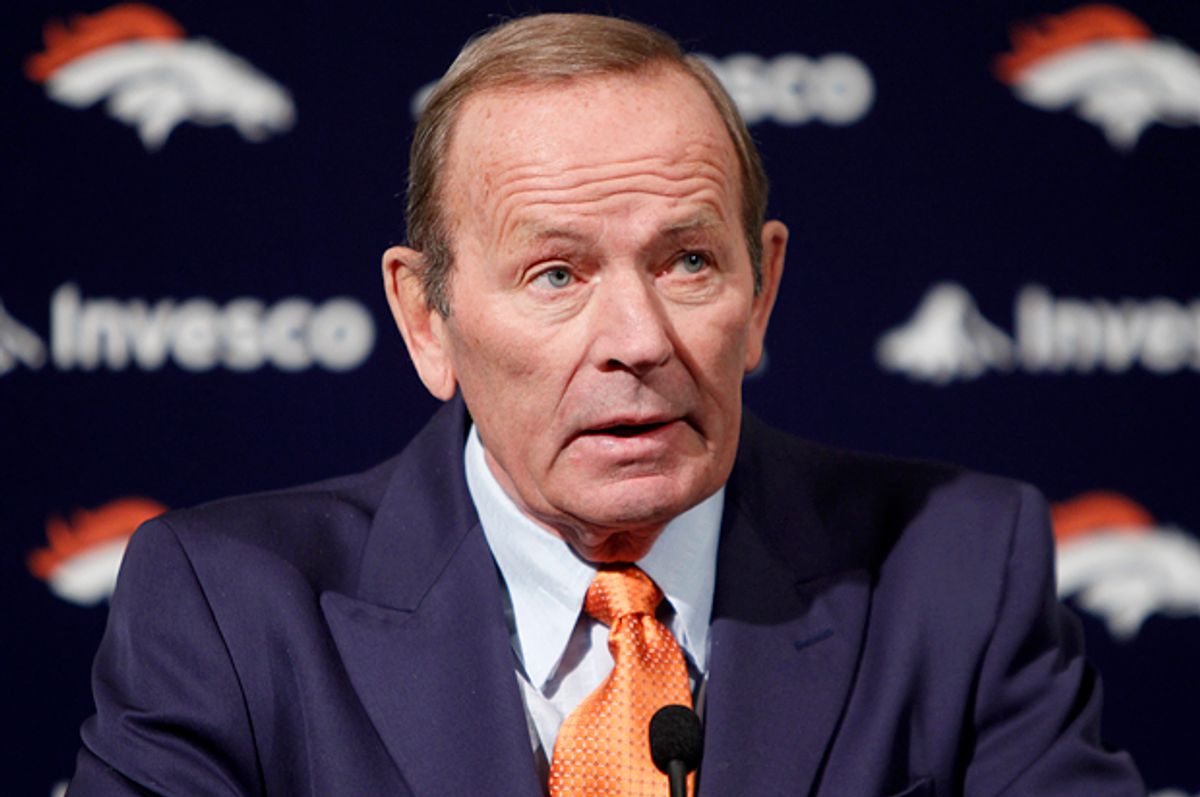 When word leaked recently that Denver Broncos owner Pat Bowlen was ceding control of his franchise because he has Alzheimer’s disease, it was hardly a shock to those who cover the team. Reporters had known as far back as 2010 that Bowlen, now 70, had been dealing with memory loss.

What’s striking, in fact, is how long Bowlen and those close to him were able to hide his illness from public view. Then again, as anyone who has dealt with diseases that affect cognition can tell you, secrecy is an inextricable part of the deal.

Bowlen, an oilman who bought the team in 1984, was the NFL’s longest-serving owner and by all accounts one of its most successful. He built a team that not only won six AFC titles and two Super Bowls but also sold out every home game.

NFL and team officials reacted to the news with anguished testimonials. In a rare moment of vulnerability, former Bronco star quarterback John Elway, who now assumes control of the team, choked up when asked about his boss. Elway’s grief is no doubt but a fraction of what Bowlen and his family are suffering.

But there is one glaring, deeply sad irony that almost no one in the sports media has bothered to mention: The game that Bowlen cherished, promoted and profited from clearly causes some former players to suffer from brain damage not entirely unlike the disease that now afflicts Bowlen.

In fact, just a month ago, the NFL announced a new proposed settlement with more than 5,000 players who had filed a lawsuit claiming that the league hid the dangers of concussions from them.

The lawsuit was filed in response to the wave of former NFL players who have developed a form of dementia known as chronic traumatic encephalopathy. The symptoms of this disease include memory loss, mood swings, depression and, in extreme cases, suicidal ideation.

For years, however, league officials — at the ultimate direction of its owners, including Bowlen — denied the link between football and brain damage.

The first comment regarding this issue came nearly three decades ago from commissioner Paul Tagliabue. “On concussions,” he declared, “I think this is one of those pack journalism issues, frankly. The problem is a journalist issue.”

Tagliabue was sufficiently concerned about the league’s image, though, to create a research body called the Mild Trauma Brain Injury Committee, whose essential function was to generate bogus studies that cast doubt on the link between football and brain damage. Among the claims proffered by these “studies” the following humdinger: “Professional football players do not sustain frequent repetitive blows to the brain on a regular basis.”

Well then. That settles that.

The NFL’s strategy with regard to brain injury (which is to say the strategy approved, employed and lavishly funded by the owners) was not merely skepticism but a campaign of denial and obfuscation.

In fact, it was only the intervention of independent researchers — many of them doctors specializing in neuropathology — that forced the NFL to acknowledge the link between football and brain damage.

It did not help, of course, that so many former players were showing dramatic signs of cognitive decline, nor that retired stars kept taking their own lives in grisly manners. One player drank antifreeze. Another led police on a high-speed chase before plowing into a tank truck at 90 mph.

Not surprisingly, the lawsuit against the NFL accuses the league not just of negligence but fraud, including “industry-funded and falsified research.”

Last year, the NFL agreed to pay a settlement of $765 million, plus $200 million in legal fees. The presiding judge felt this amount might not be enough to cover medical care of the 20,000 former players who might eventually qualify. And so the NFL offered an open-ended commitment last month.

The league wants to make this deal for obvious reasons. First, to guarantee that officials never have to testify about what they knew, and when, regarding the link between football and brain injuries. Second, because the discovery phase, along with a public trail, would be a public relations catastrophe.

This is especially true because recent studies indicate that the loss of brain function in players — both at the professional level and, more alarmingly, in college and high school — results not just from the big collisions that cause concussions, but from the accretion of thousands of sub-concussive hits.

These hits are the result of the blocking and tackling that takes place every play, even the ones in which no one appears hurt. The game, in other words, is inherently bad for the brains of those who play.

There is no way to tinker with the rules of football, or the equipment, that will eliminate this risk. And even if there were — flag football, anyone? — few serious fans (and none of the owners) would accept such reforms.

Which brings us back to Pat Bowlen and the awkward, tragic paradox of his present condition.

It is perfectly understandable that Bowlen’s family and friends and employees have sought to shield his plight from public view. It is wrenching to see someone lose cognitive function in private, let alone under the glare of media scrutiny.

This is part of the reason that so many NFL players have concealed their own brain injuries from public view over the years. They are prideful men accustomed to being regarded as vigorous and powerful by their fans.

But this natural impulse is part of what has contributed to the climate of denial when it comes to brain injury and football.

Fans such as myself are all too happy to watch the violent heroics of the games without ever having to face the potential long-term result of the entertainment we consume: a man incapable of keeping track of a conversation or finding his way home.

And the sad truth is that the NFL and its owners have made billions of dollars over the past several decades in part by uncoupling the game’s allure from its heartbreaking human toll.

The people around Pat Bowlen are now experiencing that toll firsthand. As someone who has also coped with the cognitive decline of loved ones, I have the deepest sympathy for them.

But it’s worth asking, too, how much good might be done if the Bowlen family were compelled to speak out about the reality of dementia, and the relationship between the game Pat Bowlen so loves and the men and families now suffering as he and his family are.