James Franco: "If people have Franco fatigue, they should stop paying attention"

Franco spoke to Salon about directing "Child of God," filming necrophilia, and how the media misunderstands him 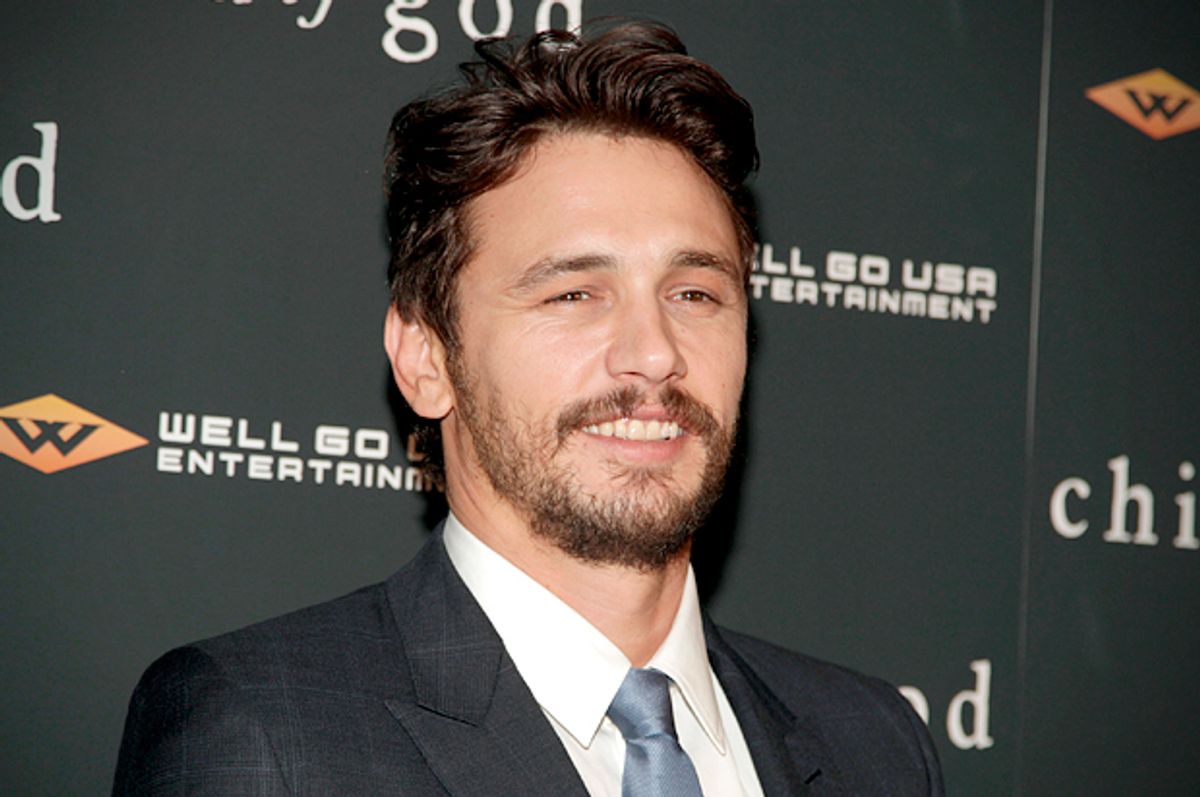 James Franco’s latest is “Child of God,” a film adaptation of Cormac McCarthy’s 1973 novel, which he directed. The protagonist, Lester Ballard, is a social outcast who lives in the woods, far away from a society that does not accept him. He is a sharpshooter who hunts his own food, and dabbles in murder and necrophilia. Scott Haze gives a brave, committed performance as Lester. (Haze is also currently starring in the Off-Broadway show “The Long Shrift,” which Franco directed). But “Child of God” is consummate Franco: a darkly macho riff on love and madness, with extended sequences of men alone.

So that necrophilia scene is hard to forget.

That was the scene that really stuck with me when I first read the book. I had gone back to UCLA and I took a class on Cormac McCarthy, and we read almost all of his books. For the final paper, we could do an adaptation of part of one of his books and turn it into a screenplay. And that [necrophilia scene] was the scene that I adapted. This was five years before we actually got the rights to his book. At that time I went to McCarthy’s agent and I said, “Could I just do a short film based on the scene?” Because I loved that scene so much — not because of the necrophilia — but watching the character discover a solution to his predicament. And by his predicament I mean, here is a guy who wants what we all want: He wants to love and be loved. But he can’t, because he is so strange; he is an outcast. What is interesting about this murderer character is that he doesn’t — like a lot of murderers — murder for the thrills or power or whatever. He discovers these dead bodies and thinks: This is how I get a companion.

This is a microcosm of the way the whole book works. In the first scene, Lester is cast out of civilized society. Kicked off his farm, he goes to live in a cabin. He’s a peeping tom, so he understands what it’s like to be intimate, but he’s not allowed into that sphere. He gets these stuffed animals, and he starts talking to them. So this idea of imposing his own kind of consciousness onto another object starts there. Once he finds these bodies, he thinks, Oh, now I can be intimate because I can control both sides of it. But it’s a human body, so the imagination lends a certain amount of suspended disbelief. It’s easier to believe that that’s an “other” because it is a body, but it lacks the consciousness, and [Lester] will supply the consciousness. I love seeing him discover each step of the way what he could do in that scene. He maybe says two words in that scene. But you know exactly what he’s thinking through his behavior. I love that kind of acting and filmmaking where you tell a story through behavior.

Lester feels misunderstood, which is true of many protagonists of your films. Is there a way you personally feel misunderstood by the public?

People are trying to conflate the movies that I make with me. I made a kind of trilogy of movies after NYU that were not planned. “The Broken Tower,” about Hart Crane, “Sal,” and “Child of God” are about isolated characters. Hart Crane’s work did not fit in with the kind of work of the time; Sal, because he fell out of favor at the end of his career; and “Child of God,” Lester, well, he’s kind of an odd guy. I think I did spend a lot of time alone in my 20s, because I was so focused on my career. I didn’t socialize much. I was so overzealous in my career preparation. I identify with that side [of these guys]. I don’t think I’m like any of these guys.  But in some way I am. I’m really not that bothered by being misunderstood.

The fact is I get to do what I want, and projects that I care about. That has to be enough. If there are certain people that kind of willfully misread me, or judge me before they even engage with my movies, or judge me on the surface level, I can’t do anything about that. And I don’t really care anymore. The fact is, I get to make the projects I want to make.

There seems to be a running theme of arrested development in your work — from your art exhibit to “Palo Alto” to the characters in your films, including Lester in “Child of God.”

It’s more that I’ve found that certain things about youth — whether it’s childhood, or teenage years, or young adult years — are great touchstones. They are such important periods of life — maybe the most exciting periods of life. Those can be woven into works that are working on more mature levels. It’s not like I went and shot “Palo Alto” with a bunch of teens. It was made by very competent filmmakers. It’s just that it’s focused on youth. It’s a way — just like this [film] is — to talk about more universal kind of human ideas, through a monster.

Lester may be a monster, but he is pretty sympathetic until he takes a turn.  I wanted him to survive, and there’s a great shot of him coming out from underground. It’s like rebirth.

Yes! You are feeling that there. But wait! He’s that guy who murdered people and fucked their bodies. It’s a very mixed kind of thing. Of course, if Lester was a real person I would never condone what he does. But fictional context ... it was less about making him sympathetic and more about making him watchable. To take his character, who does some of the worst things you can imagine, and still let him take you on the ride. Most movies with a character like this, well, he’s not the protagonist, he’s not at the center.  He’s being chased by the detective. Or he’s the one in a slasher film, chasing the heroes. Lester is certainly an antihero, he’s a Travis Bickle. The key there is: Yes, you are sympathetic, but then you are pushed away when he starts murdering. Hopefully you weren’t pushed so far that you emotionally didn’t go on the rest of the ride with him. You have that moment when he comes out of the ground that it is an emotional connection. I can shock you, but I didn’t push you away totally.

The scene of Lester carrying a dead body home to his cabin was sort of a beautiful moment ...

You are pointing out all the moments that really struck me in the book!  I needed that image. I want that scene of him struggling with that body. That image is a little absurd, a little comic, and that will round out the character — take it from this bleak idea into a new realm. How many murderers and serial killers have you seen that are kind of funny, you know?

You took a very laissez-faire approach to directing your actors in “Interior. Leather Bar.” “Child of God” has a different feel. How did you work with Scott Haze on a mostly nonverbal performance here? He uses grunts and body language more than dialogue.

“Interior. Leather Bar.” and “Child of God” are very different movies, and we could add a third piece to the triangle, “The Long Shrift,” the stage play I did with Scott. “Interior. Leather Bar.” didn’t cost much money, so what that afforded us was total freedom of content. We could try whatever, and if we went too far it wouldn’t matter. That allowed me to make that movie in a different way. I wanted it to be an exploration. Travis [Mathews, the co-director] and I figured out together that the “behind the scenes” and “making of” were going to be just as important as the re-creations — or the conjectured re-creations — of the lost scenes from “Cruising.” So that is why I had that attitude: Let’s not try to control it, let’s just explore and see what we find.

With “Child of God,” I wanted to be loyal to the book and I knew that I could shoot it in such a way and let Scott behave in such a way — because a lot of the scenes were in isolation — that he could go and live out these scenes in long, 20-minute takes, and I would be able to cut between it, almost like a documentary, and just get the choice moments. I really learned that from “127 Hours,” where so much of that story is told through behavior. With something like “The Long Shrift,” you can’t work that way. There is exploration in rehearsal. There is no camera and no editing. So we start blocking. You can’t do what you want. We need to find the way we will do it every night.

You have a dozen films, two plays onstage, a novel out, and seem to be constantly making headlines for other reasons, too ... do you worry that people are suffering from Franco fatigue?

If there were true Franco fatigue, “Of Mice and Me” would not be breaking records ... Obviously people want to come see it. If people have Franco fatigue, they should stop paying attention [laughs] -- I don’t give a fuck!