Thanks to efforts of "Speaker Cruz," John Boehner is forced to offer another vote on hard-line legislation 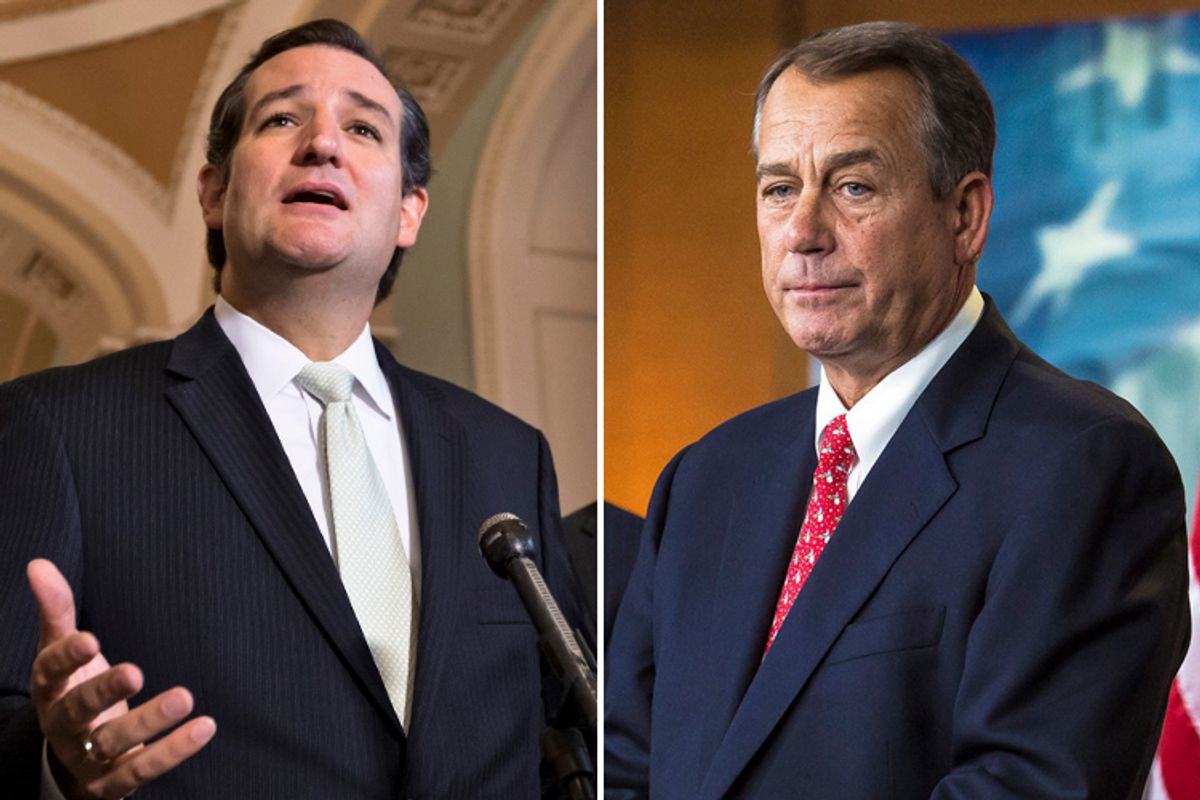 A few weeks ago, President Obama requested a several billion dollar supplemental from Congress to address the influx of Central American migrant children accruing on the border. The naive idea was that each chamber of Congress would pass a bill, they'd smooth out the dollars and cents in a conference committee, pass the conference report, get the president's signature, and resources would be dispatched southward.

But now, with Congress set to go on a five-week vacation after today's action, the chances of reaching a border compromise are zero. Both majority conferences, House Republicans and Senate Democrats, are merely trying to go on the record stating their general position on immigration politics as a whole. It was a bit silly to think that a targeted bill for a few billion dollars on anything related to the border could work its way through Congress without getting blown up into a larger proxy battle about immigration, and that's exactly what's happened.

The Senate is adjourning today. Its $2.7 billion package passed its first procedural vote yesterday -- barely -- and now appears likely to get mired in a soul-destroying debate over amendments. "Republicans will demand votes on their own proposals aimed at the border crisis, arguing for an open amendment process and consideration of bills to attack President Barack Obama’s deferred action policies and change a 2008 anti-trafficking law," Politico writes. "But Democrats may decide they want a vote on an amendment of their own to the border bill, according to Senate Democratic aides: Comprehensive immigration reform." In other words, there's no time or inclination among lawmakers to get a finished product out of the Senate today. Senate Democrats will spend August campaigning that their solution to the border is the same as their solution to immigration as a whole: the Gang of Eight's comprehensive immigration reform bill that passed last year.

The House is also adjourning today, and it does have border votes scheduled. Imminently. The leadership's pared down $659 million bill appeared to be on death's doorstep last night, as House conservatives and their beloved leader, Sen. Ted Cruz, spent the evening plotting over pizza, candy and adult beverages. While it's hard to say with certainty that the supplemental will pass today, its chances look a lot better now. Boehner and the leadership have ceded conservatives a separate vote on ending DACA, "the president's amnesty plan" -- a vote they'll only get to take if they first pass the supplemental.

But the DACA bill, drafted by Rep. Marsha Blackburn, isn't just about the program that President Obama created via executive action in 2012. It's more about curtailing Obama's power to implement his upcoming executive orders that would halt deportations. From the Washington Examiner's Byron York:

The bill says that "unless explicitly authorized by law" — that is, unless Congress authorizes it — the federal government may not issue any "guidance, memorandums, regulations, policies, or other similar instruments" that would expand the number of illegal immigrants eligible for deferred action under President Obama's 2012 executive order that stopped deportations of some illegal immigrants who came to the United States as children. The bill would also bar any part of the federal government from "newly authoriz[ing] deferred action for any class of aliens not in lawful immigration status in the United States." And it would bar the government from "newly authoriz[ing] any alien to work in the United States" if that person is in the country illegally. That pretty much covers what Obama is reportedly planning to do.

So Senate Democrats won't be able to pass a border bill before the recess and will attack Republicans for killing comprehensive immigration reform and now using the border crisis as a vehicle to try to maximize interior deportations. House Republicans will vote on, and perhaps pass, two bills that authorize some funding for the border and block the administration's ability to defer action on deportations.

Good work, everyone! Let's all go on vacation.

Update: Having some trouble gathering votes, are we? Wow.