Trump throws a temper tantrum on Twitter, while Michele Bachmann comes out with her latest insane conspiracy theory 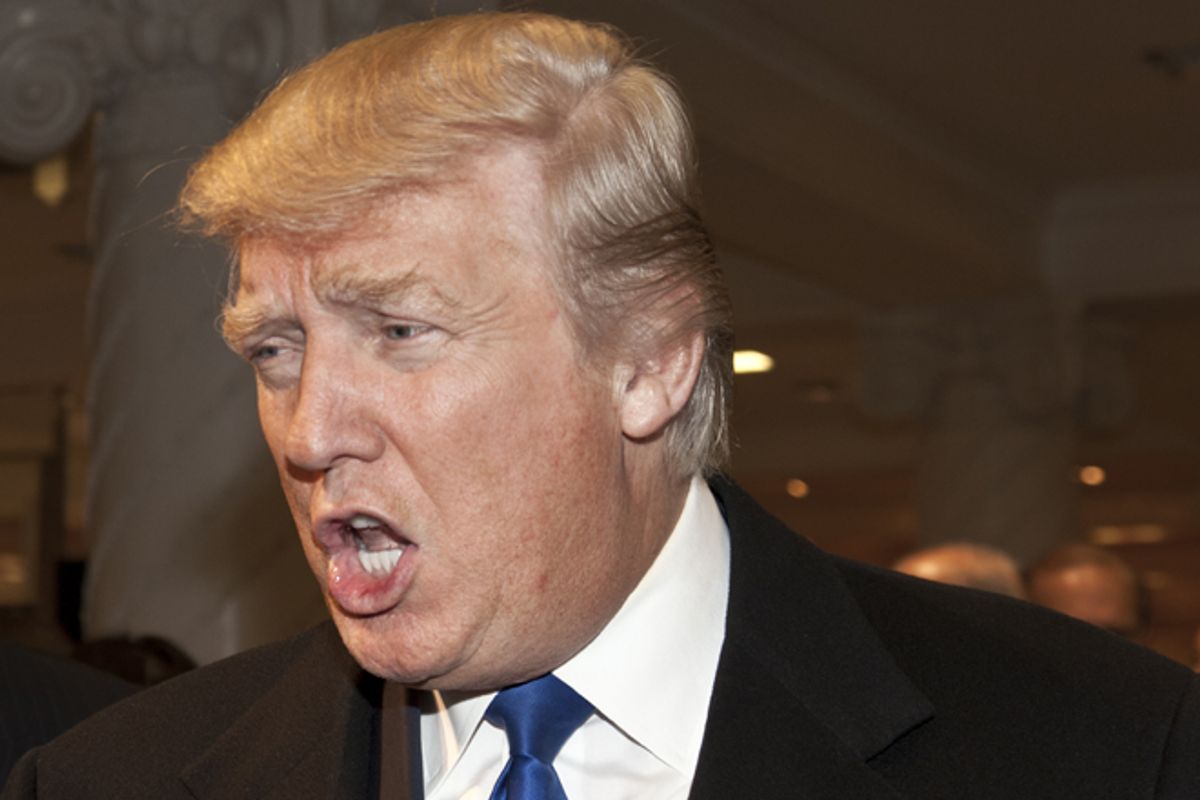 1. Peggy Noonan says the problem with the world is Obama 'dropping his g's."

Peggy Noonan is quite possibly going off the deep end. Her worries about our country's divisions have driven her there, apparently. The conservative columnist and former Reagan speech writer talked about those worries in her column in Thursday’s Wall Street Journal, in which for some bizarre reason, she made reference to the president’s grammar and posture.

“He shouldn’t be at campaign-type rallies where he speaks only to the base, he should be speaking to the country,” she wrote. “He shouldn’t be out there dropping his g’s, slouching around a podium, complaining about his ill treatment, describing his opponents with disdain: ‘Stop just hatin’ all the time.’”

Hmm, “dropping his g’s, slouching,” could that be code for something?

Also, the president's diction is what is divisive and alarming these days? Not the fact that Republicans refuse to work with him, are suing him and want to impeach him for doing his job??

Noonan’s complaint refers to Obama’s speech Wednesday in Kansas City, during which he made repeated requests for GOP lawmakers to “get some work done.” Never mind—or at least never in Noonan’s mind—the fact that Obama made the speech just hours before House Republicans passed an absurd, transparently partisan bill to sue the president over changes to the Affordable Care Act. No divisiveness there, and more importantly, no g-dropping.

But Noonan thinks it’s more important to criticize how the president talks.

Questions: Why does Peggy Noonan still exist, and why does she still have a forum, and does anyone care what she says?

Not exactly a news flash, but Michele Bachmann is still bonkers. Her latest insane theory is that Obama wants to conduct medical experiments on the unaccompanied minors who are flooding the borders. That’s pretty far out there in crazy land, even for her.

Like any paranoid conspiracy theorist, Bachmann has a whole rationale for her nutjob idea. We’ll try to keep it brief: Bachmann’s paranoid fantasy stems from the case of Justina Pelletier, the teenage girl who was put in the custody of the Massachusetts Department of Children and Families after a dispute between Boston Children's Hospital and her parents, who had the backing of other doctors from Tufts Medical Center, over the girl's medical diagnosis.

Bachmann and the religious right have inserted themselves into that case and misunderstood it thoroughly. Bachmann has even introduced a law called Justina’s Law prohibiting "federal funding for medical experimentation on a ward of the State," which is totally unnecessary since minors are already protected, and there is no reason to think Justina is being experimented on.

Out promoting her ridiculous law on "WallBuilders Live" the other day, Bachmann made her cuckoo connection to the unaccompanied minors from Central America. She said Obama and the medical community want to conduct medical experiments on them. Oh, so that's why all those kids are here. What an evil,dastardly plan.

Here’s Bachmann in her own inimitable words:

"Now President Obama is trying to bring all of those foreign nationals, those illegal aliens to the country and he has said that he will put them in the foster care system. That's more kids that you can see how — we can't imagine doing this, but if you have a hospital and they are going to get millions of dollars in government grants if they can conduct medical research on somebody, and a ward of the state can't say no, a little kid can't say no if they're a ward of the state; so here you could have this institution getting millions of dollars from our government to do medical experimentation and a kid can't even say no. It's sick."

Bingo Michele. We think you really nailed it this time.

Rush Limbaugh’s logic is that if something bothers his enemies, that thing must be good—even when that thing is morally indefensible, like domestic violence. Limbaugh decided to weigh in this week on the case of Baltimore Ravens running back Ray Rice, who definitely appears to be engaging in some domestic violence on the side. There’s a tape of him dragging his unconscious then-fiancee through an Atlantic City hotel, for instance. The NFL suspended him for two games. As some have pointed out, they come down a lot harder on players caught using marijuana and other drugs.

Limbaugh is overjoyed about every aspect of this slap on the wrist. In his view, the best part is not the wrist slap itself, but the fact that it upsets liberals and his other main nemeses, those “feminazis.” (Such a cute little coinage. Rush sure does have a way with words.) He also thinks physically abusing your girlfriend is pretty funny. Is there any depth to which the shock jock won't sink? Does not appear so.

So to review, anything that upsets feminists is good, even if it involves punching and abusing women. Hell, maybe even killing them. Limbaugh particularly enjoyed referring to “elderly feminazis on CNN” as “Jurassic Park feminazis.” This is because he wants everyone to believe that young women are rejecting feminism; internecine warfare between women is very important to him. And who could be more of an expert on what millennial women are thinking than 63-year-old "Jurassic" Rush Limbaugh?

Among birther and general right-wing-nut Donald Trump’s most endearing qualities is his irrational germophobia. We’re talking germophobia of Howard Hughes proportions. Donald Trump does not even like to shake people's hands. So, of course, he went into a full-on panic at the news that the U.S. is bringing two Americans who have contracted the disease in Liberia to America for treatment. And when Trump panics, he tweets.

“Ebola patient will be brought to the U.S. in a few days—now I know for sure that our leaders are incompetent. KEEP THEM OUT OF HERE!”

That was one of them.

“Stop the EBOLA patients from entering the U.S. Treat them, at the highest level, over there. THE UNITED STATES HAS ENOUGH PROBLEMS!”

The two ebola patients are being treated at Emory University in Atlanta which offers state-of-the-art facilities for treating highly infectious diseases, but Trump is still very worried he is going to get ebola if we do the humanitarian thing and treat these people here, where we are much more equipped to deal with the disease than in Liberia.

Then again, no one ever accused Trump of being a humanitarian. Hysterical hatemonger, yes. Ebola is not an airborne disease and can only be contracted via physical contact or body fluids, just in case he is ever interested in learning the actual facts.

5. Ann Coulter wonders why we can’t deal with our border the way Netanyahu deals with Hamas.

The headline kind of says it all. Israeli president Benjamin Netanyahu is Ann Coulter’s kind of president. He bombs civilians and seems pretty unconcerned about killing hundreds of Palestinian kids. Or, even if he is concerned, at least he still does it. She segued to a discussion of Netanyahu's iron fist in a discussion on Fox News'  Hannity about tunnels found at the U.S./Mexican border. Tunnels, hey, that reminds Ann of the tunnels in Gaza used by Hamas.

“More than a hundred tunnels have been found on our border,” Coulter told Hannity. “To smuggle in weapons, guns, they’re invading, they’re murdering, they’re raping. The head of the DEA said about a year ago that he thinks the surge of homicides in Chicago is a Mexican drug cartel.”

Then she added: “I just wish we would talk about our border the way we talk about Israel’s border.”

Now she was on a roll.

“We need a Netanyahu here. Can you imagine all these — yes, sometimes Palestinian kids get killed, ” she said as she began to laugh. Then she laughed and laughed, and then her head started spinning around and she vomited green fluid.