Reagan's crony returns to spew his drivel -- on MSNBC?

Ronan Farrow welcomed an expert on to discuss the integrity of America's spies. The problem: It was John Negroponte 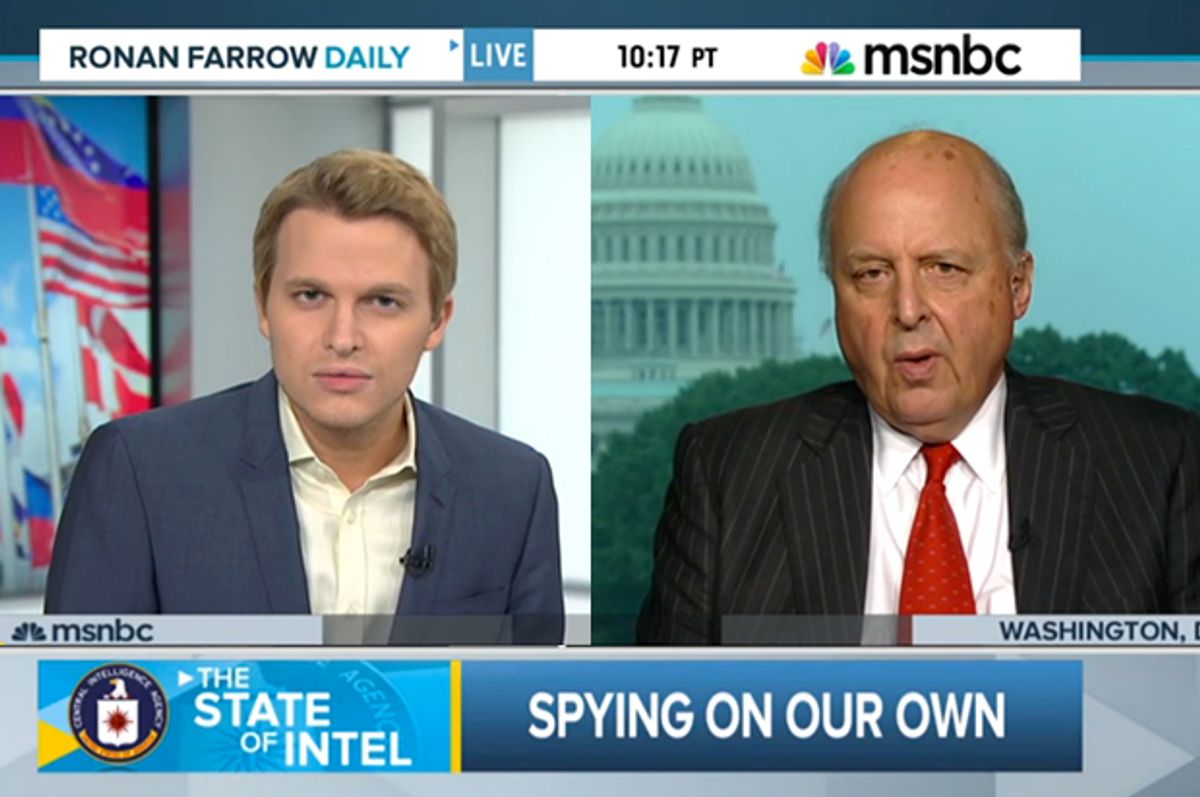 How sadly predictable it was to see yet another Republican hawk with a very long history, the old foreign policy hand John Negroponte, appearing on MSNBC's Ronan Farrow show Friday where he testified to the integrity of America's spies and wrung his hands ineffectually over the child refugee crisis at the border. After all, the man is a virtual Zelig, having been an integral part of every foreign policy disaster for the past 30 years. Unfortunately, none of that came up. After allowing Negroponte to offer up a spirited defense of the intelligence community in which he declared that all of this unpleasantness should be hashed out in secret rather than in the public eye, Farrow sagely agreed that his own vast experience in the government proved the employees of the national security establishment to all be of the very highest caliber. At that point he asked Negroponte to share his insights about the border situation given his expertise on Central America as a former ambassador in the region. If Negroponte had been in the hands of a more skilled and knowlegeable interlocutor, we might have had an interesting exchange at that point.

Unfortunately that was not to be. Yes, Negroponte is an "expert," but unless he has repented of his terrible past, one unlikely to be helpful when it comes to the plight of innocent people in war-torn Central America. Farrow didn't seem to know (or perhaps care) that some of the crisis at the border was directly attributable to the man he was interviewing --- a man who, at the very least, chose to overlook large-scale terror and human rights abuses as ambassador to Honduras in the 1980s. (At worst he was complicit and the evidence suggests he was.)

Yes, that was a long time ago, but it was only a few years ago, during his highly controversial confirmation hearings to be U.S. envoy to Baghdad in the midst of the Iraq war, that human rights activist Andres Conteris interrupted the hearings with a very pointed request: "Senators, please ask the ambassador about Battalion 316. Ask him about a death squad in Honduras that he supported ..."

They had this unseemly gentleman removed, of course. And nobody asked the ambassador about such an unpleasant topic. But then, they undoubtedly knew all about it. Everybody did.

One might think that supporting death squads in foreign countries would be a disqualification for a highly sensitive diplomatic post. But the Senate had already confirmed him in 2001 for the post of ambassador to the U.N., years after reports of his time in Honduras had been made public, so they quickly confirmed him once again and Negroponte went on to have a typically disastrous stint in Baghdad after which he was rewarded with a promotion to be the very first director of national intelligence. (Dishonesty does seem to be a qualification for the job of DNI; the current DNI is none other than James Clapper, the man who blatantly lied to Congress about the National Security Agency's surveillance programs.)

You'll recall that back in the 1980s the U.S. government was fighting communism over there so we didn't have to fight it over here and President Reagan was intent upon supporting anti-communist "freedom fighters" in Nicaragua, no matter how bloodthirsty and authoritarian they might have been. And it was a controversial position: The people were against intervention there 2-to-1 and while the Congress came up short of a full ban on funding, they did manage to tack the famous Boland Amendment to a defense authorization bill, which denied the administration direct military funds to help the Nicaraguan Contras. As we all know now, that still left loopholes big enough to drive Air Force One through. And drive though them they did.

Among other things, John Negroponte's contribution to the United States' disastrous interference was to cover up for Honduran death squads, including that "Battalion 316,"  who were systematically killing nuns, priests and other activists taking refuge from El Salvador across the border in Honduras as well as repressing all local dissent. The Honduran government was our very special ally in the region; it was the U.S. staging ground for all that "help" for the Nicaraguan Contras. After learning that the Honduran army was prepared to use the "Argentine" method against dissenters -- meaning kidnapping, torture and disappearance -- the Reagan administration upped the military aid to the country from a little over $3 million when they came into office in 1980 to more than $77 million four years later.

At the time, John Negroponte was known as a hard-liner in Henry Kissinger's orbit who could be trusted to make sure the anti-communists had everything they needed. And so he did. Human rights activists have provided ample evidence that he also looked the other way at the "Argentine methods" they used. Hundreds of people were disappeared and many more were tortured and imprisoned as America helped the authoritarians in the region fight for what was laughingly called liberty.

So what does this have to do with the current child refugees who are coming to America's borders seeking asylum? Well, unsurprisingly, actions the U.S. took 30 years ago are still having reverberations today in those countries. Much of the violence that is driving poor desperate parents to send their unaccompanied children over thousands of miles to the U.S. can be traced to sponsorship of coups in the region going back to the 1950s culminating in that bloody decade of civil war 30 years later in which we supplied billions of dollars in armaments, advice and support to fight the commies in Nicaragua and help keep the "dissenters" in line elsewhere. And as one might have predicted, at that time we created a flood of war refugees, most of whom had known nothing but violence in their short lives.

Ryan Grim and Roque Planas wrote an excellent piece about this history that explains exactly how we got from those war refugees to these kids today, and once again, it features a Reagan administration special: the drug war. Many of those traumatized young people got caught up in the drug culture and did time in the "tough on crime" era of the 1990s, where they learned how to "just say yes" to gangsters, thugs and thieves. And then we deported them back to the countries they hadn't seen for more than a decade. Grim and Planas explain what happened next:

Robert Lopez, who covers gangs for the Los Angeles Times, told NPR that many of the deported gang members thrived in the countries of their birth. "I've talked to veteran gang members who recall the early days when they arrived in the early 1990s and late '80s, and they were there with their baggy pants, their shaved heads, their gang tattoos. And this was just such an attractive thing for Salvadoran youths," Lopez said. "One gang member recalled inducting several hundred new members in a matter of several days."

Still, experts say that it wasn't just the Americanized gangsters being deported who cause the problem. There were more American pieces to the puzzle: Our "success" at routing out the cartels in Colombia and Mexico moved the action to Central America. And finally, coming full circle to Ronan Farrow's good friend John Negroponte's old stomping grounds, Honduras, yet another coup took place in 2009, this time against a democratically elected reform populist in the Hugo Chavez mold. The Obama administration reacted by pretending it wasn't actually a coup and once again enabled the military to repress dissent. In the social disarray that followed, the drug cartels moved in, making Honduras yet another casualty of the drug war. All of these countries are a chaotic, violent mess today, which is why parents are desperate to get their kids out of the line of fire.

So yes, John Negroponte actually is an expert going back decades regarding how the United States government's constant interference in the region, whether staging coups on behalf of American corporations or funding right-wing juntas or training war refugees to be gangsters in American prisons, has contributed heavily to the current crisis. No, it's not all America's fault. There's plenty of blame to go around (although none of it can possibly be attributed to those poor kids who are at the border as we speak). It would be nice if our media took the time to inform themselves a little bit before they interview some of the government officials whose hands are the dirtiest as if they are simply benign observers.