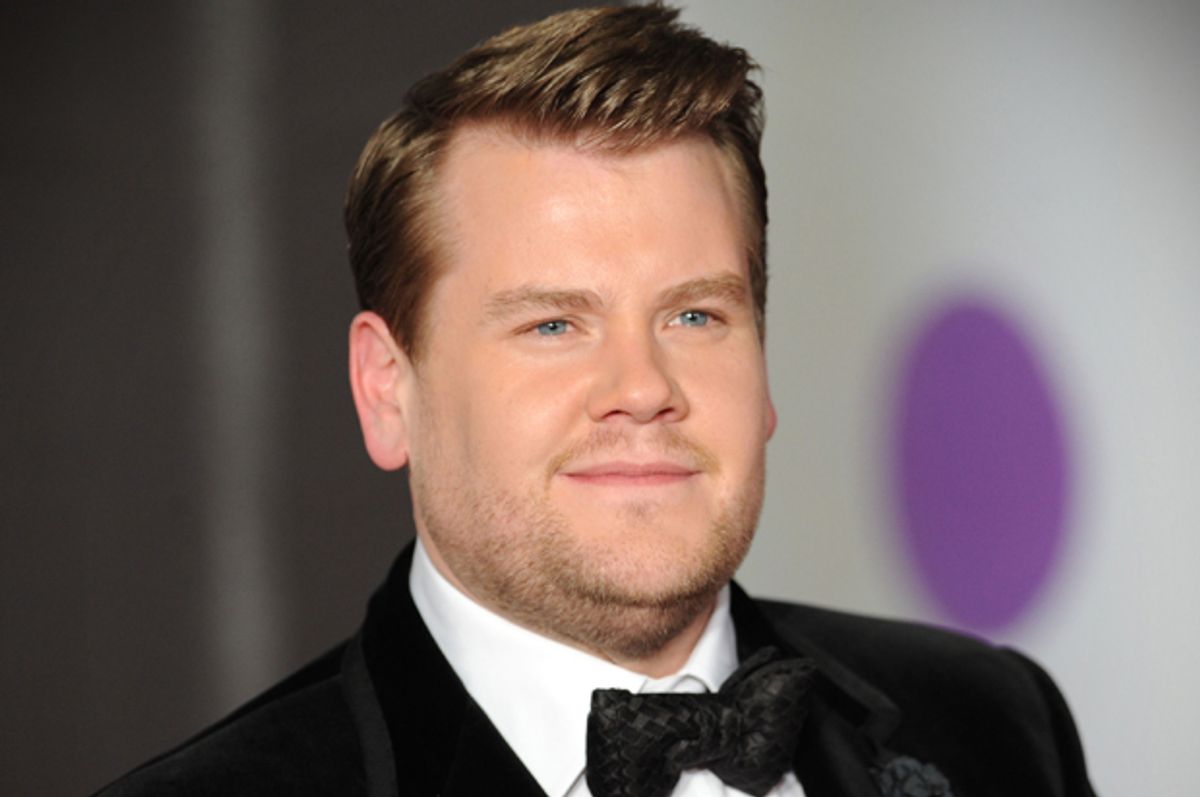 Anyone hoping for more diversity in late night television's predominantly straight-white-male lineup will have to wait for another 30 years or so, because according to the Wrap, white guy Craig Ferguson will be replaced by white guy James Corden as host of the "Late Late Show." After shakeups with pretty much every other late night program on cable television, critics saw CBS's opening as one final opportunity for a network to break up the Old Boys' Club. If you're scratching your head wondering who the hell this James Corden is, and why CBS didn't go with someone we know and love and desperately need on late night, like, say, Maya Rudolph or Aisha Tyler or Samantha Bee, well, your guess is as good as mine.

While Corden, 35, is currently one of England's most famous comedians and a Tony Award-winning actor, he's not exactly a household name with American audiences. He's also an odd choice considering that, unlike most late night television hosts, he doesn't have universal appeal or the same mild-mannered likability required by a late night host.

He was the longtime star of BBC3 comedy "Gavin and Stacey," which was both widely watched but also widely criticized (think "Two and a Half Men"), and, according to an account in a 2011 Guardian profile, routinely came off like a real-life Will Ferrell sketch character. Kira Cochrane summed up his reputation circa 2011:

Every time I tell someone I'm interviewing him they flinch visibly and a horrified noise explodes through their nose. The consensus seems to be that the actor, comedy writer, co-creator of hit sitcom Gavin and Stacey, presenter of sports gameshow A League of Their Own, is arrogant and loud, his humour laddish and dated, that he has an unappealing, thespy air of entitlement. Also, most essentially, he's attention-seeking.

Corden, also famous for winning two BAFTAs and whining that he wasn't nominated for a third, has since revamped his image. A profile in the Telegraph, just a year later, suggested that Corden's infant son, Max, and his lead role in play "One Man, Two Guvnors," redeemed him:

But he is now, finally, focused on first principles: the work, the acting work to be precise. One Man, Two Guvnors has shone a light on his true skills. “He’s absolutely turned it around,” says Russell Tovey. His friend has gone from “the public seeing him as bit of a p----, a joke, making crap stuff, to suddenly making good stuff, being a good person, working hard, winning people around, and it’s a wonderful journey. And he did it all in view of the photographers and the public. People will forgive you, and James has been forgiven.”

Now a "junior national treasure" according to the Telegraph, Corden is in good enough standing to hang out with the likes of David Beckham and Prince Charles. Well, good for him? But the fact remains that CBS would, apparently, rather take their chances on a guy whose main distinguishing factor is his boorish nature over a universally liked woman with whom American audiences are more familiar.