A Washington Post editorial argues Obama is shredding the Constitution -- because that's what Republicans say! 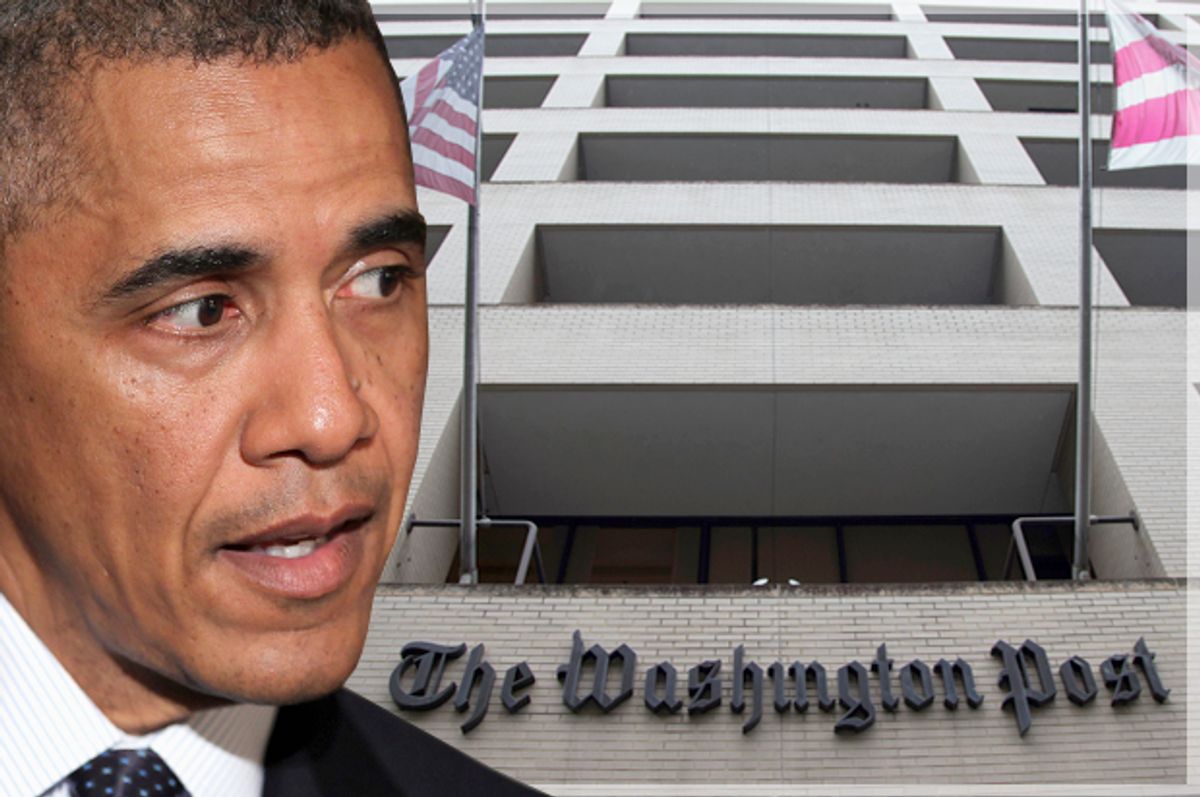 Hey! That’s just what Republican congressmen say! If you were expecting a coherent legal argument for why the president can’t use his executive authority to ease deportations, prepare to be disappointed. The Post’s case for why Obama shouldn’t act is political, and it’s based primarily on how Republicans would react:

He is considering extending temporary protection from deportation to millions of illegal immigrants, including the parents of U.S.-born children and others who have lived in the United States for years. Conceivably, this would give Democrats a political boost in 2016. Just as conceivably, it would trigger a constitutional showdown with congressional Republicans, who could make a cogent argument that Mr. Obama had overstepped his authority.

The president should think twice. Some of the same Democrats and pro-immigrant advocates urging him to protect millions of undocumented immigrants from deportation would be outraged if a Republican president took a similarly selective approach to enforcing the laws — say, those that guarantee voting rights or prohibit employment discrimination. Mr. Obama’s instincts — “we’re also a nation of laws” — were and remain correct.

There are a few things to point out here. First of all, “cogent arguments” from the Republicans on immigration are in short supply these days. Last week, when John Boehner and the leadership yanked their border crisis bill due to lack of support from their own caucus, he released a statement demanding that Obama address the problem without Congress’ approval. “There are numerous steps the president can and should be taking right now, without the need for congressional action, to secure our borders and ensure these children are returned swiftly and safely to their countries,” Boehner’s office said.

Second, the GOP’s argument must be so “cogent” that the Post didn’t need to explain what it is. There are, of course, legitimate concerns over the expansion of executive authority in the face of Congress’ pathological dysfunction, but given that the Republicans consider just about everything Obama does to be an abuse of his power, some specifics would have been nice. Also, no one actually knows what Obama has in mind at this point, so it’s a bit premature for the Post or the GOP or anyone to say that he’s shredding the Constitution.

People familiar with the law and the legal history tend to agree that the president actually has some fairly wide latitude when it comes to immigration enforcement. “Legal experts say the White House almost certainly could delay indefinitely efforts to deport millions of immigrants already in the U.S. illegally,” the Associated Press reported a few days ago, “and it could give them official work permits that would allow them to find jobs, obtain driver's licenses and pay income taxes.”

Lastly, the Post editorial board has been a bit inconsistent on immigration and executive action. In March, they argued that expanding protections offered by Obama’s Deferred Action for Childhood Arrivals program to other undocumented immigrants would be “a humane and reasonable thing to do” – a far cry from "tearing up the Constitution."

The groups pressing Mr. Obama for a policy shift would have him exempt thousands of such immigrants from deportation — beyond the “Dreamer” youths who have already been granted such protection. It would be a humane and reasonable thing to do. It would also constitute a further act of selective enforcement, buttressing GOP assertions that Mr. Obama cannot be trusted to carry out the law. Republicans’ refusal to reform a broken system has left the nation without good options.

In April, they brushed off Republican allegations of “selective enforcement” on immigration, saying that they lacked credibility owing to the party’s intransigence on immigration reform:

Under pressure from immigrant advocacy groups, which have taken to referring to the president as the “deporter in chief,” Mr. Obama has ordered a review of deportation policy. Any shift toward leniency will prompt more cries of selective enforcement from Republicans. Yet it is the GOP that has helped create and sustain the crisis in immigration policy by refusing, year after year, any reasonable reform.

And now that Obama is actually poised to act, they’re wringing their hands over a policy proposal that hasn’t even been announced . It’s incoherent and deliberately focuses on the absurd politics of the matter rather than the substantive legal issues at play.