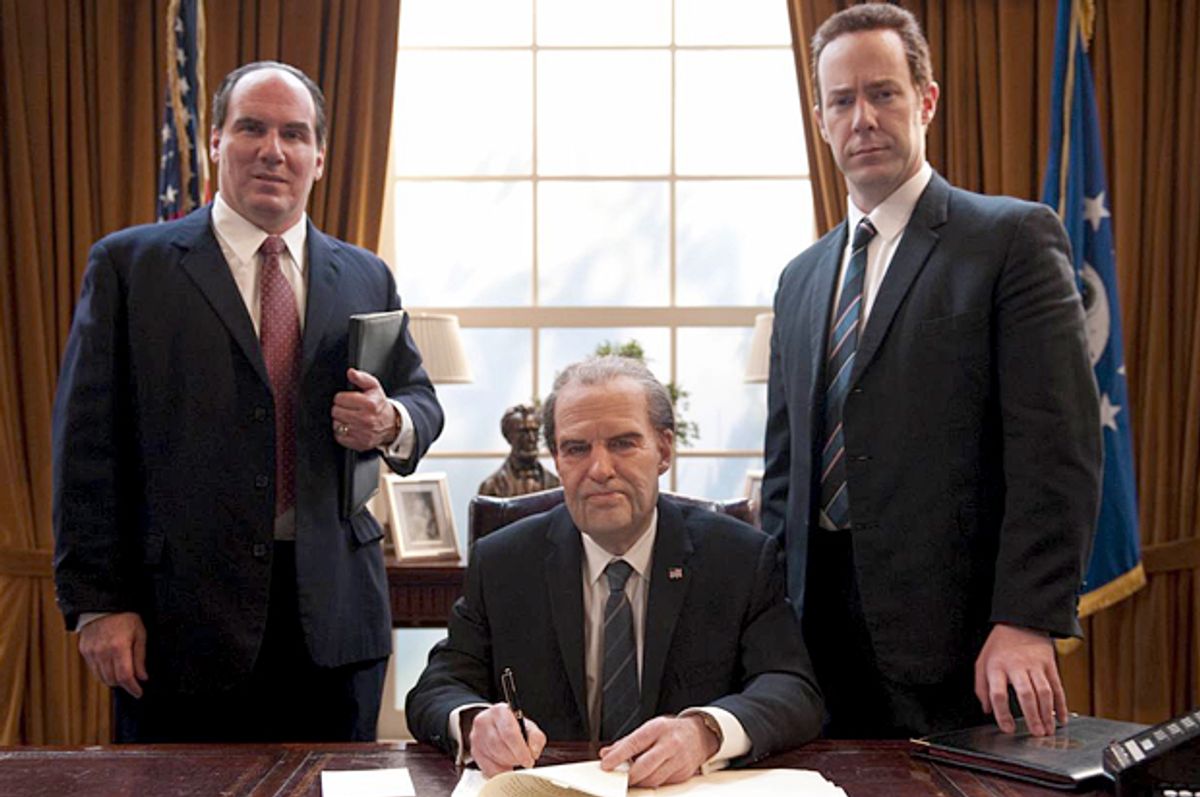 Harry Shearer as Nixon in "Playhouse Presents: Nixon is the One"
--

In honor of the 40th anniversary of the resignation of Richard Milhous Nixon, legendary comedian Harry Shearer has released an excerpt from his comedic series, "Playhouse Presents: Nixon's The One," which debuted on England's Sky1 earlier this year. To create the spot-on satire, Shearer and Nixon historian Stanley Kutler pored through thousands of hours of footage from the Nixon tapes and CBS video recordings, pulling the most fascinating moments to create an intimate portrait of what Shearer considers to be "one of the great American comic characters of the 20th century." All footage uses Nixon's dialogue, verbatim, including this clip, in which Shearer portrays the final minutes leading up to Nixon's infamous resignation:

Shearer is, of course, the "SNL" alum who famously quit the show, twice, due to reported "creative differences," co-created 1984 cult classic "This Is Spinal Tap," is the voice behind Mr. Burns, Waylon Smithers, Principal Skinner and other characters from "The Simpsons," and has been the host of the weekly satirical radio program "Le Show" for more than 30 years. He spends his time between homes in New Orleans, Santa Monica and London, currently in the latter city acting in stage play "Daytona." He called Salon from London to talk about his fascination with Nixon, "The Simpsons," and why he doesn't watch American sketch comedy.

Why did you bring this show to an English audience before bringing it to an American one?

Because I thought -- and I think, correctly, that it was going to be easier to get this show made here than in the United States, and that turned out to be true. I can’t totally explain why. All I can do is quote -- and I’m not going to reveal any names -- but one of the major channels in the United States, what they said when they were offered to premiere this series, and they said, “This is just too different from our normal fare.” I suspected that if I did this show in England, I’d have fewer dumb meetings and fewer people saying, very seriously, “Look, we know [Nixon] didn't like black people but does he have to hate Jews, too?" Just fewer of those conversations. I knew that I wouldn’t have those anymore.

I chose to make it over here and then when we brought back it over to America, we got exactly the kinds of reactions we that I had feared had we tried to pitch the show going in. I think the English, perhaps because they learn their history as a series of robes with crowns on their head, going through Shakespeare and all the way back-- those weird and nutty people who are bizarre and crazy kings and queens -- they understood the whole idea of a character like Nixon, who was just another one of those, except without a crown. In America, we tend to learn our history as sort of, the lives of a saint. And it comes as a rude surprise to us right about the time of puberty that “oh, he owned slaves!? What!?” So it comes a little easier maybe to the English. I don’t know, I’m just guessing.

Can you explain your fascination with Nixon?

Yeah, sure. I grew up in Southern California. He was sort of a constant political presence there, and very early on...He became kind of a comic figure after the first televised debate with John. F. Kennedy and had a difficult time with television. He sweated profusely on camera and everyone thought he lost the debate because he looked bad. The next thing you knew, he was running for governor of California. He held the most lackluster press conference where he made one of the least honored promises that he ever made which was “You’re not going to have Richard Nixon to kick around anymore,” after which he decided to run for president. So I view him as one of the great American comic characters of the 20th century. A self-made and self-destroyed man.

Who are some of the great comic characters alive today?

I think--maybe my perspective is warped--but I don’t see anybody who has that sort of gigantic character or personality that makes him such an outside, tragicomic figure in today’s scene. I think the great advantage we have is that [Nixon] taped himself. We heard him offstage for hours, for years. And that’s not happening these days. Everybody is so tailored and handled and consulted and everybody knows cameras are on. Every once in a while you’ll capture somebody saying something untoward on a live mic but it’s usually just some minor gaffe. But we have the benefit of Nixon who revealed the whole scale of his looniness to us hour by hour, day by day, year by year on tape. There may be somebody of that ilk around now--of that great comic character. But we don’t know it yet.

The person who comes to my mind is Rob Ford.

Rob Ford’s more of a clown. Nixon, for all of his weirdness, was a very intelligent guy. Most people today would be unaware of it, but his domestic policy was in many cases way to the left of Barack Obama. He started the EPA. He started OSHA. He actually gave a speech, never did anything about it, but he gave a speech calling for a guaranteed annual income for all Americans. No Democrat would be caught dead mouthing those words now. He wasn’t a clown. Nixon, while he was seriously disturbed in many ways, was a person of substance like him or not. I think Ford is a lightweight, is what I’m saying, despite his girth.

Is there a deeper criticism there, of society, that these figures who are kind of making world changes are all characters in and of themselves? We don’t know who they really are?

I think if you go outside America, the character that’s probably the most interesting, both becuase he’s clearly a person of some substance and because he’s clearly a person with serious personality challenges, is Vladimir Putin. I think there’s a lot going on there that one can only suspect at this point. And one is better off not suspecting it inside Russia, by the way.

That’s true. Although do you think you’ll try to take that up in some greater form like TV or documentary style on Vladimir Putin?

I don’t know. To me, it’s hard to do a character who doesn’t speak English because I, as you can see from the clip, I really try very hard to get them right, to get them accurately, to get them real, and I do speak Russian a little bit. I used to a lot. But there’s no point in doing that when the audience speaks English. So then you’ve got to translate him into a different language and I haven’t thought of a way to do that yet.

You’ve created comedy in every medium. But you’ve hosted "Le Show" on the radio for more than 30 years. Has there ever been any temptation to switch mediums with that show or that format--to TV or even an online series?

I’ve been trying for a while now to take my approach to comedy sketches and to try and fit it to a visual medium either in online or television. The problem so far is it involves a technology which has never been used before in the sketch comedy world. And one reason why is that it costs too much. And I’ve been running into that problem over and over again but I’m still trying to do it. I think it would really revolutionize the form. I’m still chasing that rainbow.

Can you describe more about what you mean in terms of revolutionizing the form?

A revolution in technology. Sketch comedy has been, in the visual world--online or television--either nobody bothers to look like the characters they’re playing at all, or they wear very expensive prosthetic makeup to look like the characters they’re playing. This is a very, very different way of doing that. I tried to achieve some verisimilitude with heavy prosthetic makeup but I didn’t see any difference. But this comes at it from a whole different direction. That’s really all I can say without giving my game away!

Alright, fair enough. What are some of your favorite satirical programs or sketch programs on TV today?

I don’t watch satirical programs on TV for a couple of reasons. One: I think all of them make a huge strategic error in my book by mingling with the very politicians and media people they’re supposed to be battering. I never liked that. I didn’t like it when I was in "SNL." I lobbied hard when I went back to "SNL" along with my colleagues to get rid of that and not have politicians and media people as guest hosts and we won for exactly one whole week. By the third week of that season, Jesse Jackson was hosting the show. I just don’t believe in that. I think satire is meant to be practiced behind people’s backs. That’s how I prefer to do it. Also, there’s great sketch comedy in Britain. I’m a very big fan of a couple of sketch comedy shows over here. I don’t think Americans would’ve ever heard of them. One is called "Harry & Paul" and the other is called "The Armstrong and Miller Show." They’re both up on YouTube so Americans can see them. I think they’re both really, really great.

I know that you’re reluctant to speak about how "The Simpsons" has changed over time. So I’m not going to ask you any questions about that.

[Laughs] I’ve been instructed to be reluctant.

But I know "Simpsons" crossovers have been controversial--not just for cast members but also for fans. How do you feel about the upcoming "Family Guy" crossover?

"Playhouse Presents: Nixon's The One," will debut on an American network this fall.