More children are dead than fighters: A plea for sanity in Gaza

A 10-year-old Palestinian boy playing in his yard is the first death as fighting resumes in Gaza. It must end now 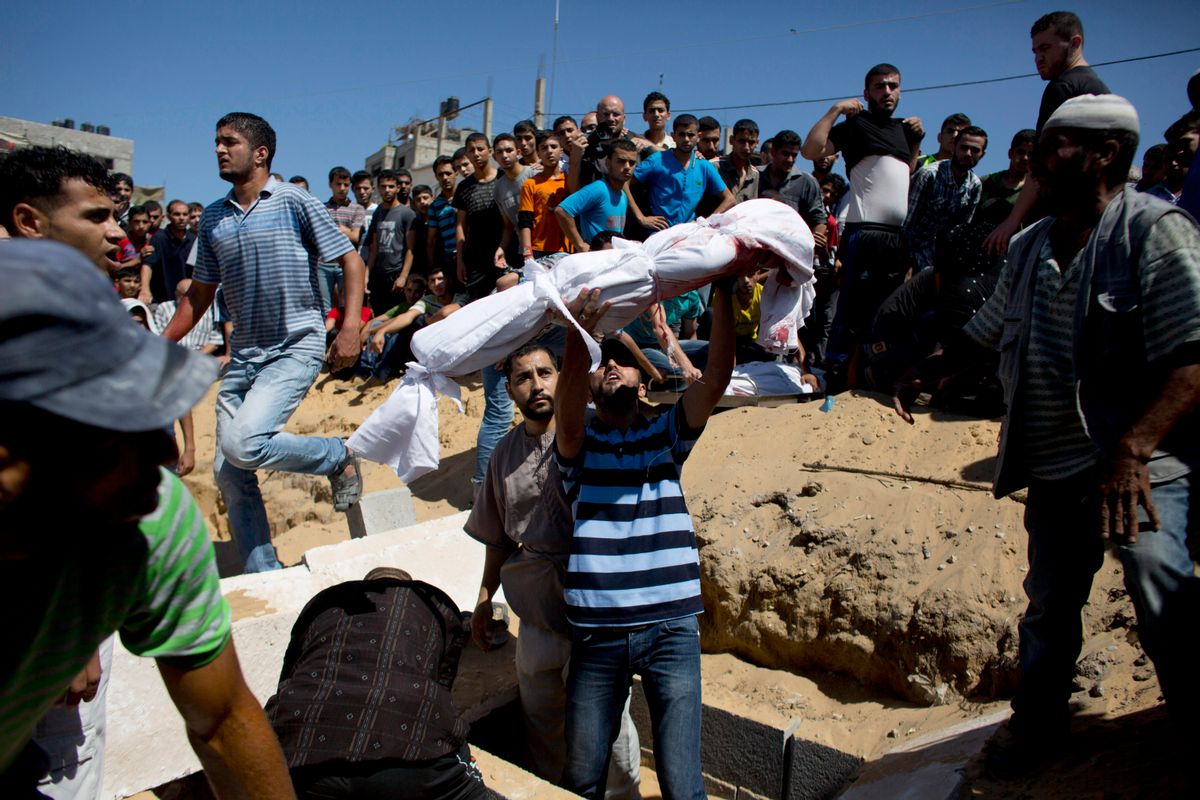 FILE - In this Monday, Aug. 4, 2014 file photo, A relative raises the body of a child from the Najam family during the funeral in Beit Lahiya, Gaza Strip. Seven members of the Najam family, including a 90-year-old man and at least two children, perished in Sunday nights Israeli airstrike, the latest in more than a dozen similar attacks in this war that, in some cases, has wiped out two or three dozen members of a single extended family. (AP Photo/Dusan Vranic, File) (AP)
--

Over the course of history, nations have launched punitive operations against organizations they deem as terrorists, seeking a decisive victory to crush resistance. Most of these operations have been largely counterproductive and unsuccessful. Examples include Operation Agatha targeting the Jewish Resistance Movement in 1946, French tactics against the FLN in Algeria in the 1950s, the Americans’ extensive bombing against the Viet Cong and NVA in the 1960s and the British Army’s actions in Northern Ireland, ranging from Operation Motorman to Bloody Sunday in 1972.  Israel’s Operation Protective Edge in the Gaza Strip is one such example.

While the IDF has succeeded in destroying a number of tunnels and in targeting some Hamas militants, the operation has also resulted in the deaths of more than  1,900 Palestinian civilians, including 408 children.  It has been reported that more children have died in the IDF’s operation than armed fighters.  These facts and this devastating reality has resulted in increased isolation for Israel and international condemnation, as well as the potential prosecution of both Hamas and Israel for war crimes.

There is no viable military solution to the conflict for either side, there never has been, and there never will be. This lack of military success over Hamas has been met with voices in Israeli society calling for more extreme measures.  One of Jerusalem Post's regular columnists, Martin Sherman, has written two Op-Eds, "Into the Fray: Why Gaza Must Go," and "Into the Fray: Far Too Little, Much Too Late," on July 24 and July 26, 2014, respectively, calling for the dismantling of Gaza's infrastructure, the relocation of Gaza's population, and Israeli annexation of the entire region.

These articles incite hatred and a complete contravention of international law, as they call for the ethnic cleansing of Gaza's 1.8 million Palestinian residents. Ethnic cleansing is the systematic forced removal or killing of individuals of a certain ethnicity or race from a territory.  Annexation has always been regarded as contrary to international law, from the time of Anschluss, to the Russian annexation of Crimea.

Sherman proposes to force 1.8 million Palestinians from their homes in Gaza and put them somewhere else.  He doesn't suggest where they will go, just that they should be forcibly removed.  He sees ethnic cleansing as the only solution to Hamas' control of the Gaza Strip.  And he presents all of this as if he is a humanitarian, choosing to use the term "humanitarian relocation."

A similar article, one calling for the most extreme measure of genocide against the Palestinians in Gaza, was published then removed from the the Times of Israel’s  website, eliciting much Israeli and international condemnation, including a statement from the Times of Israel, describing it as contrary to their editorial guidelines. The opinion, titled “When Genocide Is Permissible,” written by Yochanan Gorden, stated: "Anyone who lives with rocket launchers installed or terror tunnels burrowed in or around the vicinity of their home cannot be considered an innocent civilian.”  Thus, Mr. Gorden questions whether genocide, or the mass killing of individuals based on their ethnicity or race, is permissible in Gaza.

This sort of rhetoric, although not new within certain extreme elements in Israeli society, has picked up steam during the past few weeks.  Moshe Feiglin, the deputy speaker of the Knesset, has published a plan for the “annihilation of all fighters and their supporters,” a clear violation of the Genocide Convention. Feiglin further proposes that those who agree to leave Gaza will be offered an “international emigration package.”  But first they will be placed in “Tent Camps” near the Sinai until a location can be determined for them.  Again, he is attempting to coat ethnic cleansing as a generous and humanitarian offer to the Palestinians.

Retired Maj. Gen. Eiland went even further, stating in an article published on Aug. 5 on Ynet News that there were no "innocent civilians" in Gaza. He added that Gaza’s residents “are to blame for this situation just like Germany's residents were to blame for electing Hitler as their leader and paid a heavy price for that.”

Not only is the major general wrong in his analysis, he has also failed to read his history properly. The Nazi regime did not gain more than 40 percent of the vote in the 1932 election. Although many Germans were complicit in their unspeakable crimes, the 525 recognized by Israel as part of the "Righteous Amongst Nations" (including members of the Nazi Party such as Oskar Schindler), as well as the countless other German Trade Unionists, Communists and others sent to the Concentration Camps were certainly not.

The fact that this complete disregard for Palestinian life has found its way in the U.S. should be a cause for concern for us all.  Here, if you do anything short of blame Hamas for Palestinian civilian deaths, you are subject to ridicule and slander.  Most recently, comedian and TV talk show regular Joan Rivers declared  that “Palestinians deserve to die,” an echo of the position of many Israeli officials that there are no innocent Palestinians.

As far as I’m concerned, there is no difference between her statement and that of Israeli officials calling for genocide against the Palestinian people.  If she had made that statement with regards to any other minority group, it would mean the end of her career.  With the Palestinians, this sort of talk has been completely normalized and integrated into the Israeli and U.S. media.

This rhetoric will only go further to the right until officials realize that calling for extreme measures that show a complete disregard for Palestinian life, though clear violations of international law and inhumane, are also not strategic.  Croatians, Serbs and Bosniaks were forcibly moved during the Balkan Wars because they were deemed a security threat. Sunni villages and towns in Syria are suffering the same fate.

Martin Sherman of the Jerusalem Post quoted Einstein. Let me return the favor. Einstein stated in a speech to the New History Society (1930) that “Peace cannot be kept by force. It can only be achieved by understanding.” Moshe Dayan, a well-known Israeli military leader, and certainly no leftist, even came to the realization that ”If you want to make peace, you don't talk to your friends. You talk to your enemies.”

Hamas’ military wing may be guilty of war crimes, and this is being investigated by many human rights groups, along with Israel’s violations of humanitarian law. However, its military leadership is separate from its political leadership, and the latter has been seen as less extreme and willing to compromise.  When the Unity Government was formed on April 23, all members of the Palestinian cabinet agreed that the political program of the government would be that of the Palestinian Authority, i.e., the two state solution and Quartet plan.  If the Israelis treat the two parts of Hamas as the same, as the British did with Sinn Fein and the IRA, it only gives succor to the more extreme elements.

It is worth noting that when the unity government was formed, the United States and the European Union did not take any punitive action but rather stated they were willing to work with the Palestinians and wanted to wait to see what happened.  Israel should take this position and recognize the unity government, even if talks occur through mutually acceptable intermediaries.

Israel’s current policy is to never negotiate with terrorists. It is a truism that today’s terrorists often become tomorrow’s politicians. Eitan Livni, deemed a terrorist by the British, had a distinguished political career, as did Menachem Begin. More recently, the image of Northern Ireland’s Deputy First Minister Martin McGuiness, a former member of the IRA and a strident republican, shaking hands with Queen Elizabeth II, whose uncle was murdered by the IRA, shows not only what painful sacrifices have to be made to establish a lasting peace after decades of conflict, but also that such sacrifices yield far better results than an endless cycle of violence.

The above examples of calls for ethnic cleansing and genocide of the Palestinians should be a wake-up call to Israelis that the status quo is untenable, and that Israel’s latest operation is going nowhere, as did the last three in the past decade.  The Palestinian civilian death toll continues to rise, while the status quo remains.

There was some hope that this operation is finally over, with the 72-hour cease-fire and the withdrawal of Israeli troops outside Gaza’s borders.  However, the recent Israeli airstrike in Gaza, killing one child and injuring 15 others, and Hamas’ sending of rockets into Israeli cities, has killed that dream. It is now clear more than ever that the only way forward is to reject extremist rhetoric, end the operation and pursue initiatives for peace and justice.

Manal Tellawi is a Palestinian-American attorney in Texas