They shut off our water: When I was 13 and poor, this is what we endured

We had experienced an electricity shutdown before, but this was worse -- and affects how I view Detroit's plight 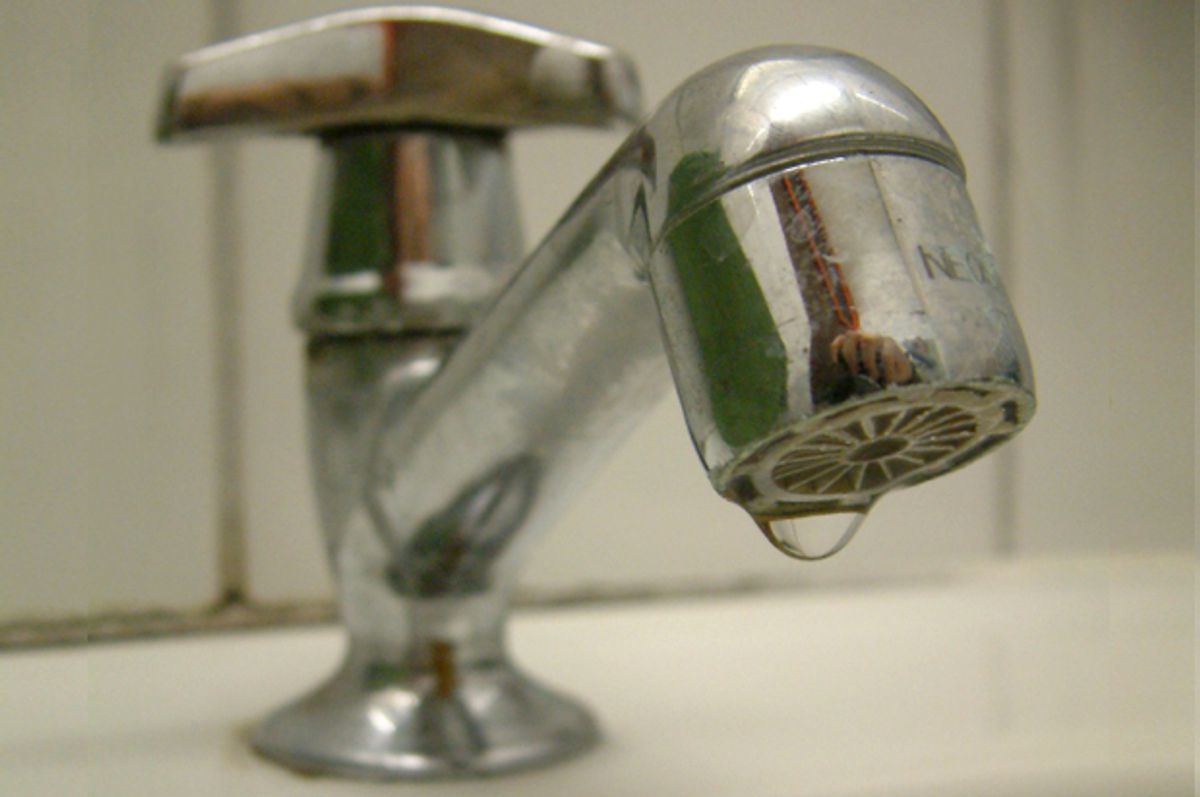 The controversial decision this summer by the City of Detroit to shut off the water to thousands of families who were in serious arrears on their utility bills prompted a 1960s flashback for me.

Back in the summer of 1969 I was 13 and the oldest of six kids living on Goodviet Place, a dead-end street in Glen Rock, New Jersey, when the Ridgewood Water Co. shut our water off for lack of payment. A guy from the municipal utility just pulled up to our curb, got out with with a tee-shaped rod that he used to shut off service from the street. It was the same summer I met my first elected official, Bergen County Sheriff Joe Job, who had handed me the foreclosure papers on my family’s home because my parents were not home to accept service.

We had experienced the electricity being shut off before, but that felt more like a rustic adventure. It harkened back to a cooler historical time like the American Revolution. If Thomas Jefferson could compose the Declaration of Independence by candlelight I could use it to finish my homework. Our mother drilled into us that it was not the hardships we faced that defined us, but how we survived them that mattered.

But the water shut-off felt different. It was that kind of threatening act that made me feel like the local powers-that-be wanted us to move on like we were undesirables. There is nothing cool about being thirsty or enduring the smell of full toilets in the middle of a hot summer, especially when some of your siblings are still really little. Electricity can be optional but  water is not. The water-human link is primordial -- as a species we build our settlements in proximity to water.  We will go to war if access to it is blocked. We will lie, steal or cheat to control it.

My family was in this chaotic financial free fall because of an economic downturn in which my father had lost his job in the textile industry, which was leaving the country in pursuit of higher profit margins. A proud Irish Catholic, he had concealed our deteriorating financial condition from my mother until it was too late. At one point my dad left the house and started living in a rental car; his own car had been repossessed, which he only learned after he mistakenly reported it stolen to the police.

Now, as the oldest of the “men of the house,” it fell to my younger brother Andrew, who was 10, and I to conduct the water raids on the Esso Gas Station up on Lincoln Avenue in Hawthorne, the next town over. No doubt we were quite a third-world sight, in the midst of suburbia, carrying those heavy five-gallon buckets several blocks.

But it was empowering, an end run around the capitalist system that had no regard for what we as children were experiencing. It was the real America — no money, no water, no exceptions. For us, taking the cover off the toilet tank and dumping in big oil’s fresh water, so we could finally flush the toilet, was a direct action that gave us a sense we could control something in our lives.

Back in 1969 our water shut-off galvanized our fractured nuclear family but we suffered in isolation. Today, more than 40 years later, the decision by the Detroit Water and Sewerage Department to shut off the water for thousands of people has prompted international outrage that extends well beyond the bankrupt city limits.

Last month the U.N. Human Rights Office of the High Commissioner issued a sharp rebuke to the city utility  for the “violation of the human right to water,” quoting three world-renowned experts who all called for the immediate restoration of service. In a sign of hemispheric solidarity, the Council of Canadians,  a social justice nonprofit , delivered 200 gallons of tap water to thirsty Detroit residents.

“The human suffering is that of a major disaster, one that grows every day,” Maude Barlow, national chair  of the Council of Canadians, said in statement. “I ask Obama, with his sense of justice, to intervene and to declare a state of emergency. It is appalling that this has been allowed to happen, even more to go on for so long.”

Last month the NAACP Legal Defense fund filed a class action suit on behalf of Detroit’s residential households asserting that the water utility had a double standard because it was letting commercial accounts, which owed  hundreds of thousands, continue to get their water while it was shutting off service to its residential customer base, which is overwhelmingly African-American.  For its part, the utility reports that 89,000 customers owed more than $91 million in back bills with more than half of its residential accounts at least  two months behind. In order to make up for the operating shortfall and massive bad debt on the books the City Council boosted water rates by a whopping 8.7 percent, putting water service further out of reach of those who struggled to  afford the existing rates.

The utility denies that it has unfairly targeted the city’s poorest residents. “Every customer that has come to the DWSD with a legitimate financial hardship has not had their service terminated. In cases where the water has been shut off, it’s been restored,”  said Darryl Latimer, a DWSD deputy director in a statement. The Detroit News editorialized that the U.N. Human Rights Office was overreacting, observing that in May, when termination notices were sent out to 47,000 accounts, more than 90 percent paid up with just 4,500 accounts being actually suspended with many of those located in vacant buildings.

This past Saturday the utility  hosted its first ever “Water Affordability Fair” to improve its community outreach and ensure that residents who truly can’t afford their monthly water bill get assistance staying current with their bill. There were mounted police outside the event that drew 400 people looking for help, according to the Detroit News. The political pushback on the residential shut-offs has prompted the utility to extend a moratorium on residential shut-offs until Aug. 25.  The issue of how the city handles the affordability crisis surfaced with federal bankruptcy Judge Steven Rhodes, who warned  the city last month that its handling of the residential shut-offs had created both a public relations problem and real hardship.

In a recent company statement the  utility committed to releasing a new plan Thursday to  improve customer service and how it responds to the  affordability crisis in the future.  A call to the customer help line went unanswered on Monday.

The city had hoped  to spin off the current municipal utility into something called the Great Lakes Water Authority to distance itself from the bankrupt Detroit municipal stigma and be more attractive to potential bond holders and investors. The utility provides water to Detroit and 127 surrounding suburban communities.

This dust-up over who should play for the rising cost of drinking water, and what happens when they can’t pay, is part of a much broader debate about the public’s shrinking social contract with government when it comes to purveying water and other basic services. In the past merely being a resident was good enough to ensure access to a municipal water supply, if one existed, for a nominal amount. Now local tax bases are increasingly shrinking, as  big corporations opt to move to more tax-friendly offshore taxing jurisdictions. Towns, villages and cities are scrambling to lease out or sell their water utilities to make up for their shrinking revenues and to get out from under the ever rising cost of maintaining them. Add in the continued softness of local property values in much of the nation, and you can understand the pressure on government to lease or sell off their plumbing. In every going-gone concern the fixtures are the last to go.

According to a recent issue of Governing Magazinem, the USEPA estimates it will cost $380 billion to maintain and upgrade the nation’s aging sewer and water infrastructure. The federal government, while continuing to mandate tougher water quality standards, continues to retreat from its historic role since the passage of the Clean Water Act in 1972 as  the major underwriter of these essential kinds of vital public service  projects. Increasingly local, county and state governments are looking to so-called public-private partnerships as a way out of the squeeze play of lower tax revenues and less aid from the federal government. This further increases the leverage of the private capital markets to  dictate the terms and conditions for the delivery of what a generation ago was considered  a basic public service.

This gold rush by municipal governments to privatize their publicly held water utilities can mean a loss of local control and real sticker shock for consumers. Food and Water Watch, a nonprofit founded by subject matter experts from Public Citizen, conducted a survey of water rates before and after privatization in several communities in Pennsylvania. In places like Bristol, Media Borough, West Chester, rate payers saw more than a three-fold increase in their water bill post-privatization. Similar results have been documented both here in the United States and around the world where private water companies take over. Public Citizen reports that across the country, once a private water company takes over the public system, consumers typically see on average an 18 percent spike every two years in their rates.

And as New York state Comptroller Tom DiNapoli reported in 2011, the revenue from such privatization deals can be fool's gold, because all too often the government uses the cash infusion from a “private -public” partnership, that surrenders a long-held public asset, as a so-called one shot to plug a short-term budget gap. DiNapoli concludes the "asset maximization" is “little more than new ways to perpetuate unsound financing practices, such as using new debt to pay for current expenses.

This crisis in the public financing of the water supply deepens as climate change, with prolonged drought, and increasing water demand for invasive sub-surface energy extraction (fracking) will all combine to put an unprecedented pressure on existing fresh water supplies. The bill for our chronic underinvestment in pollution prevention, water supply and distribution is coming due.  So far, the response has been to put the resolution of this crisis in the hands of the same investment crowd that brought us the Great Recession. After all, they know how to make a real killing on scarcity.