Eyewitness to Michael Brown killing says teen held up hands, pled for life before being shot

One of the last things Brown said, according to a witness: "I don’t have a gun! Stop shooting!" 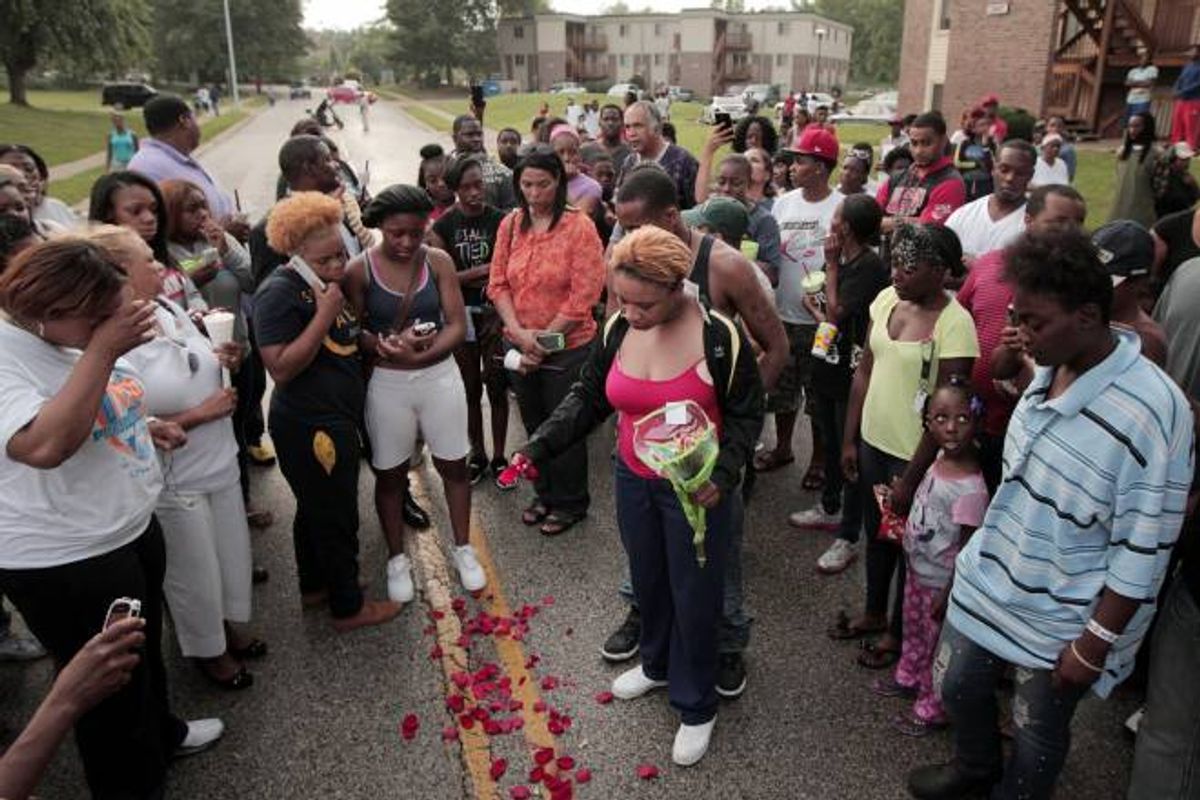 Lesley McSpadden, center, drops rose petals on the blood stains from her 18-year-old son Michael Brown who was shot and killed by police in the middle of the street in Ferguson, Mo., near St. Louis on Saturday, Aug. 9, 2014 (AP Photo/St. Louis Post-Dispatch, Huy Mach)
--

As the hard-luck suburb that he once called home descends into open conflict between citizens and police, an eyewitness to the killing of Michael Brown is now sharing his recollection of how the unarmed 18-year-old was shot by a still-unknown Ferguson cop.

"Get the fuck on the sidewalk!" is what the officer who killed Brown said to him 20 minutes before he died, according to Dorian Johnson, an eyewitness who says he was with Brown when the incident occurred. At the time, Brown and Johnson were walking on the side of the road, heading home, Johnson says.

According to Johnson, Brown responded by refusing to step to the sidewalk, telling the cop that it was unnecessary because they were almost home. Brown and Johnson continued on their way, but the officer reportedly slammed his brakes and backed up his car in order to confront them.

The officer then said something along the lines of "What'd you say?" Johnson claims, before he slammed his car door into the adjacent Brown and then grabbed him by the neck. "I could see the muscles in his forearm," Johnson said. "Mike was trying to get away from being choked."

Johnson says what happened next differs from the story the Ferguson police department has told, in which Brown was shot while trying to wrestle the officer's gun away from him. "They’re not wrestling so much as his arm went from his throat to now clenched on his shirt,” Johnson said. “It’s like tug of war. He’s trying to pull him in. He’s pulling away, that’s when I heard, ‘I’m gonna shoot you.’”

The next thing he knew, Johnson says, the cop had unholstered his weapon, pointed it at Brown, and pulled the trigger. Johnson claims the officer was still holding Brown "until the gun went off."

The two boys then fled for safety, Johnson says. Johnson hid behind some nearby cars, while Brown kept running. Johnson says Brown had passed about three cars before he was shot again, this time in the back.

After being shot in the back, Johnson says, Brown turned around to face the policeman with his hands up. "I don’t have a gun! Stop shooting!" he exclaimed. The cop responded by firing several more bullets into Brown, after which he collapsed to the ground in a fetal position.

"After seeing my friend get gunned down, my body just ran," Johnson says. He eventually made it to his apartment, where he collected himself and confirmed that he had not been shot. When he left his apartment five minutes later, he claims, he saw Brown, dead, lying in the middle of the street.

Johnson has offered his testimony to the Ferguson police, his attorney and former St. Louis Mayor Freeman Bosley says, but was rejected.