“Dinosaur 13”: Why Fox News would have had a field day with T.rex

A lively new film takes on the tangled tale of small-town fossil collectors, Native Americans and a dino named Sue 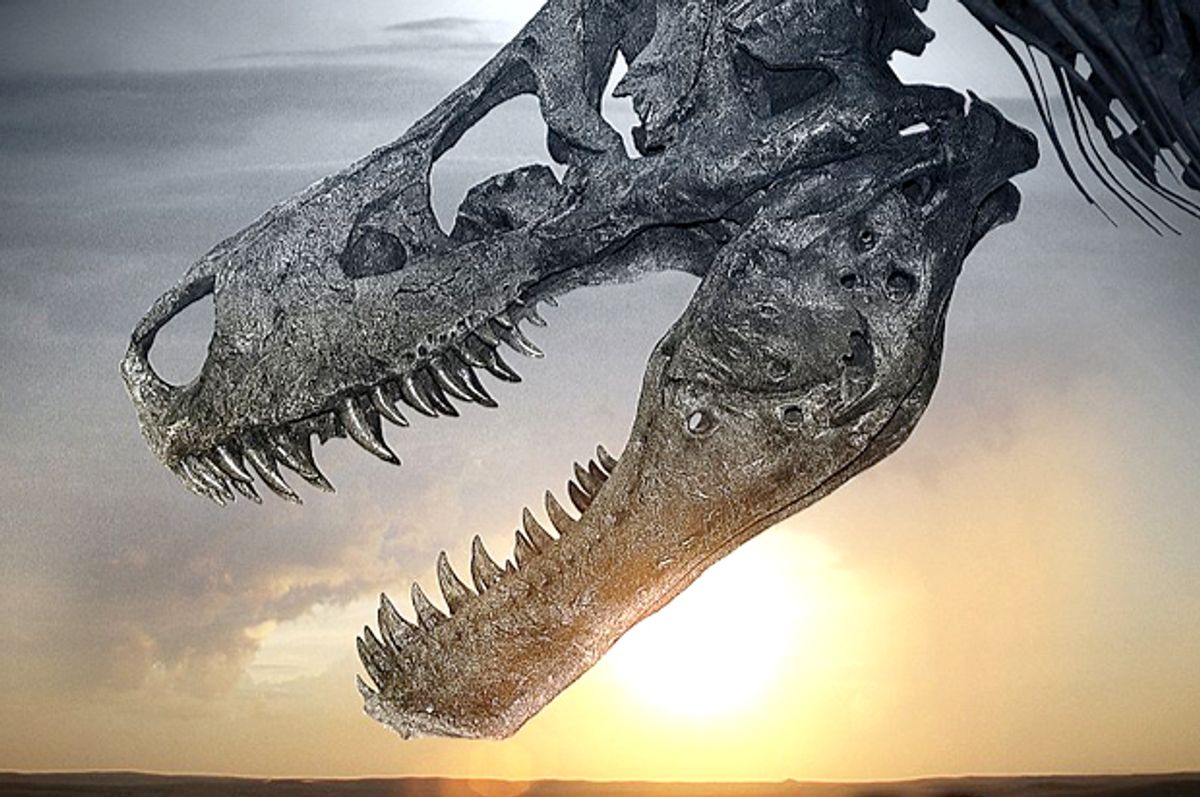 You have to do some decoding while you watch Todd Douglas Miller’s fascinating documentary “Dinosaur 13,” which has elements of legal thriller, political drama, academic throwdown and scientific geek-out. But perhaps the highest endorsement I can give this film is that I’m still not entirely sure what to think about the story it tells. By focusing on the scrappy team of uncredentialed South Dakota paleontologists who found and dug up “Sue,” the largest and most complete Tyrannosaurus rex specimen ever discovered, Miller turns this tangled saurian saga into a David-and-Goliath fable in which David gets stomped. That’s definitely not the only perspective one could take, and indeed it may make some urban liberal viewers distinctly uncomfortable.

One conclusion I draw is that the United States government is lucky that its 1992 seizure of Sue occurred before the advent of 24-hour talk TV. While the military-style invasion of the tiny town of Hill City, South Dakota, did not turn into a Waco or Ruby Ridge-style showdown, the optics were pretty bad: Wholesome heartland schoolchildren waving upside-down flags and chanting, “Shame on you!” as National Guard troops loaded heavy crates onto transport vehicles. Crates full of dinosaur bones. Just imagine what Fox News would have done with that. (Some of their viewers believe the dinosaurs only go back 6,000 years or so, admittedly. Separate issue.) As one of the local paleontologists cracks, if someone in Hill City had had a warehouse full of cocaine and dead bodies, the feds would not have found it necessary to send in 30 FBI agents and hundreds of soldiers.

Exactly why the government came down so hard on the Black Hills Institute, an entrepreneurial group of fossil-hunters who wanted to start their own museum in the heart of South Dakota’s dinosaur country (and have since done so, although without Sue), remains mysterious 22 years later. Hints are dropped in “Dinosaur 13” that the realm of university-trained Ph.D. paleontology was openly hostile to for-profit outfits like BHI, and saw them as pirates or bandits who were scavenging irreplaceable fossils and selling them off to the highest bidder. But that's basically how the entire discipline of paleontology worked until a few decades ago, and anyway there’s no actual evidence that the academic mafia called in some kind of hit. Furthermore, no one has suggested that BHI founder Peter Larson -- whose passion for dinosaurs, and for Sue in particular, is unmistakable -- and his team did anything less than an exemplary job of handling perhaps the greatest discovery in paleontological history. Still, it’s tough to resist the impression that Sue was simply too big a find for three guys from the South Dakota School of Mines. She was the fossil equivalent of the Treasure of the Sierra Madre, and somebody bigger was bound to take her away from them.

As many readers of children’s books and visitors to the Field Museum of Natural History in Chicago now know, Sue is named for Susan Hendrickson, the paleontologist who actually noticed the dinosaur’s nearly complete skeleton sticking out of a shelf of crumbling rock in western South Dakota on a scorching day in August of 1990. She was working on a dig with Peter Larson, his brother Neal Larson and Bob Farrar, the principals in BHI. While that may seem like a long time ago to some of you, it was nonetheless the age of video technology, and beginning the day after Hendrickson’s discovery, BHI took extensive videos of every aspect of the dinosaur’s excavation and recovery, which involved weeks of hard labor in 100-plus degree heat. We see a good deal of this in “Dinosaur 13,” and it certainly conveys the impression that Hendrickson, Farrar and the Larsons understood the possible magnitude of their discovery and treated it with extreme care. None of them would use the word “skull” during the dig, for fear of jinxing discovery of the most important single piece of any paleontological specimen. When they finally unearthed the “S-bone,” it was so well preserved that scientists would later identify marks made by protozoan parasites that fed on Sue during her lifetime, and dire injuries she probably received in battles with other dinosaurs. (She evidently had gout and arthritis as well, and died at the age of 28.)

Once the BHI team confirmed that this was indeed a remarkably good T.rex specimen – nobody knew quite how good – the Institute wrote a check to landowner Maurice Williams for $5,000, with the intention of using this new find as the crowning glory of its modest museum. (No, that’s not a lot of money, but it was more than anyone had ever paid for an unexcavated dinosaur at that time.) The BHI team transported Sue back to Hill City and began the painstaking work of preparing and restoring her bones, and after that the professional paleontologists (and then the government) gradually got word that the Dakota yokels had dug up something truly extraordinary. That’s about where the clarity stops in this story, and even that version is too clear by half. Did Williams actually own the land where Sue was found? Did he own the dinosaur itself? What was she, exactly? (Bearing in mind that we don’t in fact know whether Sue was a she.) Was she an antiquity, a biological specimen or a piece of real estate? All those questions wound up in dispute, and had to be hashed out in court.

If you didn’t follow the story of how Sue went from Hill City to nearby Rapid City (where she spent three years stored in boxes at the School of Mines), from there to Sotheby’s auction house in Manhattan and finally to the shores of Lake Michigan (paid for, in large part, by McDonald’s and the Walt Disney Co.), I should let you discover this modern fable for yourself, in Miller’s admittedly contentious telling. But some of the highlights are worth mentioning here, including the fact that Maurice Williams was a member of the Cheyenne River Sioux Tribe and therefore “his” land did not exactly belong to him. He did not have the right (or so a judge would later rule) to sell a fossil found on his property without the federal government’s permission.

Now, it seems not just possible but likely that Williams and the Sioux tribe were eager to embrace this legal interpretation once it became clear that Sue was worth a lot more than $5,000. And where the moral of this fable lies is very much in the eye of the beholder. Miller is happy to go with a tale of grotesque federal overreach, and the jackboots of the oppressor crushing a plucky band of entrepreneurs and their all-American small town. One could also suggest that Williams got hustled by some white dudes on the original transaction, much the way that Native Americans have been hustled for five centuries or so.

I suspect that this is one of those rare cases where truth really does lie somewhere in the middle: It feels like some measure of justice that Williams and his family ultimately got rich off their dinosaur, which sold for $7.6 million (not counting the 10 percent commission) in the Sotheby’s auction. Even Peter Larson agrees that the Field Museum is the “second-best place in the world” for Sue to wind up, since there was no way in hell she was ever coming back to Hill City. But this is not one of those Eisenhower-Little Rock moments where you get to feel warm and fuzzy about the power of the state being on the right side of history. If we’re being honest, those are few and far between. Instead, what happened to Peter Larson and his band of fossil-collecting misfits after the seizure of Sue was more like one of those moments that cow most of us into obedience most of the time, those moments when the government resembles Sauron the Great in a bad mood, fixing his Lidless Bureaucratic Eye on whoever has most recently pissed him off.