Strange but true: Eating raw cashew nuts in large amounts can be fatal 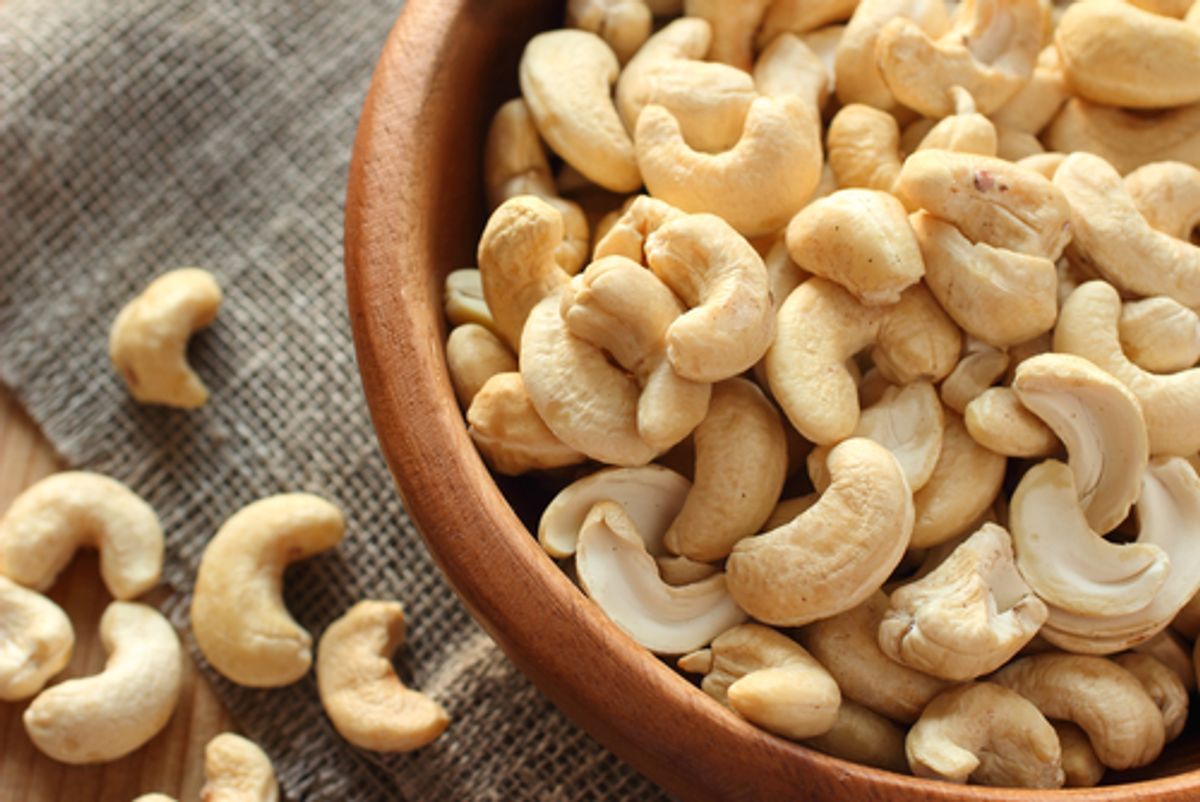 Many of us take pride in experimenting with adventurous new foods, especially when we travel abroad.  But, as tempting as these mysterious delicacies can often appear, some of them can make us violently ill or even worse can be fatal.  So without further ado, here are 10 of the world’s most dangerous foods according to Conde Nast Traveler, that you can eat but probably shouldn’t. You have been warned!

1. Raw Cashews. Most of us wouldn’t hesitate to buy a bag of these delicious nuts from the local bodega.  But, what you don’t know is that the ‘raw’ cashews you purchase from the store shelf are not exactly ‘raw.’  The kernels have actually been steamed to remove the dangerous chemical urushiol which is related to poison ivy and can cause an unpleasant reaction on your skin.  In large amounts, raw cashews can be fatal, so steer clear!

2. Elderberries. While elderberries are often used as a medicinal plant and found in homeopathy remedies to treat skin wounds and colds, the leaves, twigs and seeds contain a deadly chemical related to cyanide, which can cause severe illness and nausea if ingested. While some varieties are safe to eat, those that aren’t ripe or cooked properly can cause diarrhea and seizures.

3. Fugu. Also known as the puffer fish, fugu is a Japanese delicacy that if not prepared correctly can kill you or cause asphyxia. The fish, normally eaten raw, can only be served by highly trained chefs with years of experience in preparing fugu. This is because its internal organs contain the lethal poison tetrodotoxin.  This substance is 1,200 more toxic than cyanide, which for the more daring foodies provides a slight tingling sensation. When consumed, the toxin does not enter the “blood-brain barrier” so a person can remain completely unaware that his/her central nervous system is slowly closing down, before experiencing paralysis, according to News.com.au. But this hasn’t stopped the Japanese, who continue to consume 10,000 tons of the fish every year.

4. Cassava. Cassava is a tropical root crop, known also as tapioca, that is found in South America, Asia and Africa and used as a filler in chips and cakes.  Imported raw cassava is particularly dangerous because it contains a toxin called linamarin which the body converts to the deadly cyanogenic glycoside when eaten raw.  The only way to ingest it safely is to first peel it and then boil it thoroughly.

5. Blood Clams. Blood clams are harvested in areas of the Gulf of Mexico, the Atlantic and the Pacific. Unlike other varieties of clams that are safe to eat, the blood clam can ingest viruses and bacteria including hepatitis A, typhoid and dysentery because it lives in lower oxygen environments.  Conde Nast Traveler advises to query where exactly your blood clams herald from when dining and to especially avoid all blood clams from Chinese waters which have beenknown for hepatitis outbreaks.

6. Casu Marzu. Ready to be turned off your food for life? What the Sardinians call tradition and an aphrodisiac is none other than rotten maggot cheese. Say what?  Yes, this sheep’s-milk cheese is laid outside in the open to allow flies to lay eggs inside which then hatch into maggots and feed on the cheese causing fermentation.  When ingested, the larvae survive and wiggle through your intestinal walls causing severe illness.  This “delicacy” has been banned by the Europe Union but there’s still a black market for it and shepherds continue to produce it, according to reports. When consuming, local recommend wearing eye protection because the maggots can jump six inches into your eyeballs. Enough said!

7. African Bullfrog. Those thrill seekers trekking across southern Africa may come across this amphibian on the menu in places like Namibia. But be warned: the African bullfrog contains a variety of substances toxic to humans.  Locals say that young frogs who have not yet begun to mate are the most lethal because of a toxin they carry. But, even if you eat the wrong parts of a post-mating frog at any time of the year, you risk kidney failure.  Best advice? Avoid eating or as many others around the world do -  keep it as a pet!

8.  Hákarl. Described as the “worst tasting food on earth,” this rotten smelling shark from Greenland is considered a traditional Icelandic food and makes the list because it does not have a kidney or urinary tract.  Why does that matter, you ask? Well, put simply, it means all the waste and toxic substances are filtered directly into the animal’s skin so is essentially a recipe for food-borne illness. In order to filter the waste appropriately to ensure it is safe for human consumption, chefs must ferment the shark and hang it to dry for up to six months.

9. Ackee. Taking a bite of Jamaica’s national fruit can cause severe vomiting known as Jamaica Vomiting Sickness thanks to a poison it contains called hypoglycin. It can also cause coma or death if eaten before it's fully ripe. Originally indigenous to West Africa, the black seeds of this fruit are always toxic, but the yellow-hued flesh is apparently okay to consume if the red fruit has burst open. Best to avoid.

10. Sannakji. Last on the list is this Korean raw baby octopus, which is particularly deadly because it continues to move after it has died even after it has been chopped up into small pieces.  Even when the limbs have been removed from the body and covered in sesame oil, its suction caps still conserve their gripping power so they are able to latch onto your mouth and throat, becoming a choking hazard for novice eaters and causing asphyxiation.  Then again sannakji connoisseurs actually get off on the sensation of the octupus’ legs attempting to climb back up the throat. Advice for beginners? Chew before swallowing!