All hell has broken loose: When law enforcement is law and order's biggest threat

The debacle in Ferguson represents a near-total breakdown of our civic institutions. Here's why that's so scary 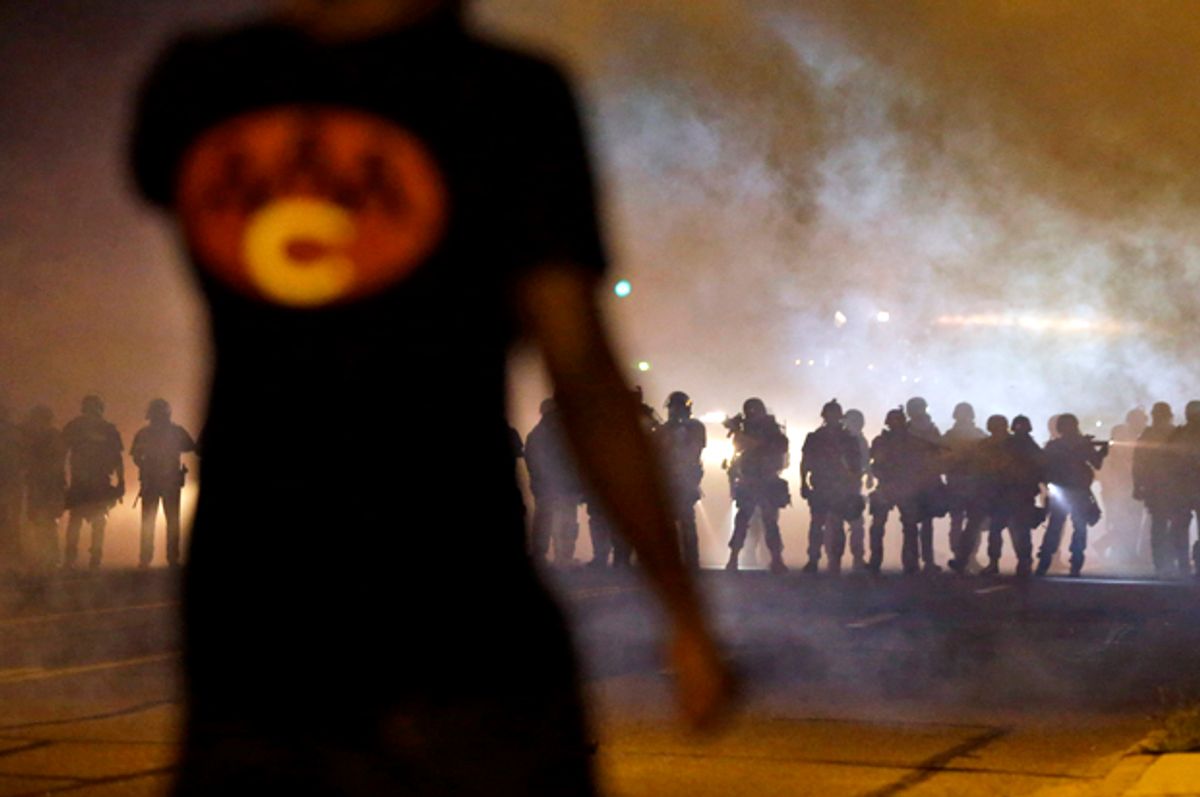 The circumstances leading up to the fatal shooting last weekend of 18-year-old Michael Brown by Missouri police officers are in dispute. Police officers maintain that Brown attacked officers and tried to seize one of their weapons. An eyewitness to the event describes something more along the lines of an execution of a frightened and unarmed man running for his life. All that’s known for certain is that Brown is dead, and he died at the hands of the cops.

Since the fatal shots were fired, all hell has broken loose, leading up to the surreal and horrifying spectacle that unfolded in the streets of Ferguson, Missouri, last night as police in military gear transformed an American city into something approximating a war zone. What we’ve witnessed in Brown’s shooting and in the days that followed has been an almost complete breakdown, from bottom to top, of the civil institutions we empower to protect our rights and maintain order.

The police force operating in Ferguson is clearly out of control. Even if you were to buy the official explanation that Brown’s shooting was the result of a physical confrontation with officers, every action taken by law enforcement in the aftermath of the incident has served to undermine their own credibility and destabilize an already volatile situation. The identity of the officer who shot Brown is still being withheld, an act the St. Louis Post-Dispatch rightly describes as a violation of “every principle of transparency recommended by law enforcement experts.”

In response to the ongoing protests over Brown’s killing and sporadic incidences of looting, the police have made it their policy to escalate tensions further by decking out SWAT officers as soldiers, arming themselves to the teeth, pointing high-powered rifles at unarmed protesters, spraying protesters with rubber bullets, firing tear gas indiscriminately in residential neighborhoods, roughing up and arresting journalists, and shooting gas canisters at television crews. Acts of lawlessness and thuggish intimidation like these are typically practiced by state police forces in authoritarian regimes.

Dig just a little into the activities of individual police officers and you get the sense some of the heavily armed cops have no idea what they’re supposed to be doing, or just don’t care. When a Los Angeles Times reporter asked the Ferguson police chief about the arrests of the Huffington Post’s Ryan Reilly and the Washington Post’s Wesley Lowery, the chief said they were detained by “probably somebody who didn’t know better.” Neither Lowery nor Reilly was charged with anything, their arresting officers never identified themselves, and according to Lowery, they were never read their Miranda rights.

This appalling behavior has been going on for days, and throughout it all, Ferguson’s police chief has stumbled along from incident to incident, defending the brutish conduct of the officers and sitting down for softball interviews on Fox News. The county police chief insists that “we’ve done everything we can to demonstrate a remarkable amount of restraint.” There is clearly no accountability and no order when the person overseeing what amounts to a militarized occupation of an American city describes it as an act of “restraint.”

And that’s where the political leadership has failed. The elected officials charged with overseeing the police forces in Missouri have done nothing to rein them in, even as television cameras and smartphones broadcast each successive abuse of authority. No one has come forward to take responsibility for ending this debacle. Ferguson’s mayor went on TV this morning and refused to second-guess the deplorable conduct of the police. The state’s governor, Jay Nixon, had been largely absent as the situation spiraled out of control. He released a tepid statement this morning calling the events of the past four days “deeply troubling” and urging “law enforcement agencies to keep the peace and respect the rights of residents and the press during this difficult time.”

That’s insufficient. Right now, law enforcement in Ferguson is the biggest threat to law and order, and there can be no reasonable hope of “keeping the peace” while the residents of the city feel they are under siege from the people charged with protecting them. Someone with the political authority to intervene – be it local politicians or Jay Nixon or Barack Obama or anyone in between – needs to shoulder the burden and make clear that abuses like those we’ve seen over the last few days will not be tolerated. President Obama, in a brief statement this afternoon, said the local authorities have to be “open and transparent,” that there’s “no excuse for police to use excessive force against peaceful protesters,” and that the police “should not be bullying or arresting journalists.”

That's the right sentiment, but those words need to be translated into real action, not just to prevent another night of tear gas and flashbangs, but to help restore a modicum of faith in the public institutions that have failed us.