Black America's everyday reality: Ferguson and the world that terrorizes us

Powerful images coming from Missouri are just a small dose of the life we know and endure. It's time to embrace it 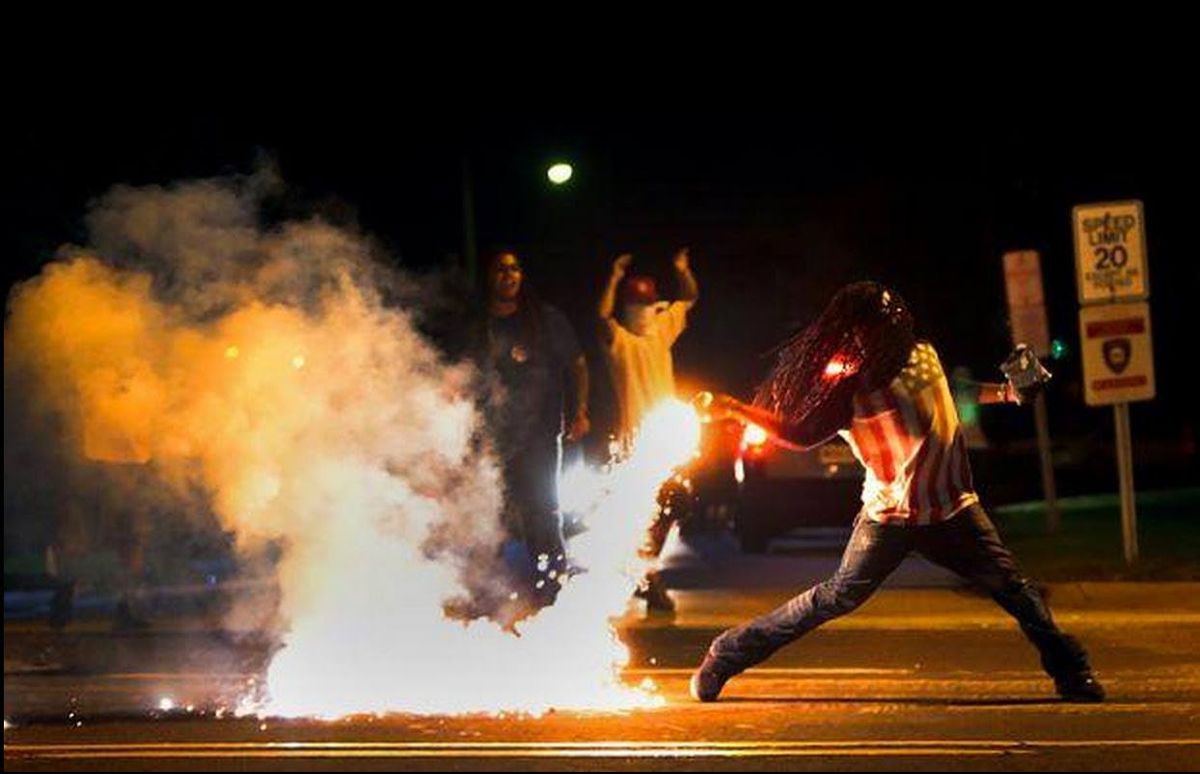 I told a co-worker I wanted to hide from the Internet last night because the weight of Michael Brown’s killing had become unbearable. “I'm logging off the Internet for a few days. I can't anymore,” I told her (in an online chat conversation, ironically enough). She consoled me: “I'm sending you the biggest digital hug,” she said. For that I am grateful.

My spirits have been dwindling since last Saturday when Brown, a quiet, 18-year-old black kid — who had recently graduated high school and was scheduled to begin college this week — was executed by a police officer. Witnesses say Brown had his hands in the air and was pleading for his life to be spared when the cop, whom officials refuse to identify, finished him off with “more than a few” shots including, allegedly, at least one bullet to the face. Since then, I’ve watched countless clips from protests held around the Ferguson community by outraged residents demanding answers. I’ve listened to Brown’s mother attempt to put her loss into words. I’ve seen the Vine clips and followed moment-by-moment tweets, status updates, blog posts and Instagram photos, ad nauseam. I’ve also read stories of unarmed black men being gunned down by cops — the first was killed at a local Wal-Mart in Ohio for picking up toys; the second in Los Angeles for lying down and complying with an officer’s order during an “investigative stop.” The annihilation of black and brown bodies can be taxing. So I decided powering down my devices to preserve my sanity seemed worthwhile.

As it turns out, I couldn't stay off the grid long. I reneged; I reconnected, only to find a friend of mine — a reporter — under siege. He had been sent to St. Louis to cover the aftermath of Brown’s killing, including the demonstrations, and police were forcefully telling him he couldn’t do his job. Cops lobbed tear gas canisters his way and shot rubber bullets. Essentially, his life was in jeopardy. When he managed to call in to give a live account of what was happening, the tremble in his voice offered me little comfort. On the call, his speech patterns were noticeably different — he stuttered and coughed, choking as if a fire was lit in his lungs. "Honestly in these circumstances, I'm not sure what a safe location would be," he managed to spit out. I’ve been unable to answer that same question for quite some time now.

Not far away, the Washington Post’s Wesley Lowery and the Huffington Post’s Ryan J. Reilly were arrested and assaulted by police officers wearing military fatigues and full tactical gear. Following their release, the two reporters were interviewed by MSNBC’s Christopher Hayes to recap what had just occurred. Both seemed distraught, especially Lowery: “If this is how they’re treating us [credentialed reporters], imagine how they are treating a 24-year old black kid from Ferguson,” he said.

The thing is, we actually don’t have to imagine how police are treating black people. It’s there, right in front of our very eyes. People are being ordered to disperse, but cornered by police who have blocked all possible paths home. People who are arrested without cause — and complying with officer instructions — are suffering physical abuse for resisting arrest. Police are “accidentally” assaulting “trespassers” and then mocking their injuries. Police are setting fire to property and pointing their guns in residents’ faces.  Police are terrorizing citizens in packs. None of this is new. None of this is extraordinary. What is happening right now in Ferguson, Missouri, happens every day in black America.

And it is exhausting. As Salon contributor Mychal Denzel Smith wrote this week at the Nation, “Counting the bodies is draining. With every black life we lose, we end up saying the same things. We plead for our humanity to be recognized. We pray for the lives of our young people. We remind everyone of our history. And then another black person dies.” Each instance serves as a reminder that your life is under attack. You want to escape. But you can’t. So you try to tune out. But you fail, and you grow wearier with each attempt to circumvent your reality.

Those who aren’t forced to endure this type of world every day don’t have to deal with the fatigue. It is a benefit that, admittedly, I envy at times. For some, the accounts that brave reporters like Lowery, Reilly, my friend and others bring them are the closest they will ever get to experience the life of Michael Brown or those who have taken to the streets in his memory.

For the rest of us, what transpired between the authorities and the people of Ferguson (and the press) last night serves as a reminder of a life we cannot separate ourselves from. We remain inextricably linked to the world that terrorizes us. We are unable to extricate ourselves from those who nefariously plunder our neighborhoods and seek to dismantle our livelihoods.

Yet, acknowledging this much also requires admitting to a painful truth: that society is bound by an unbreakable compact between oppressed and oppressor. We were born into the same world, the same cage. Our realities have been molded by one another, crafted in each other's image. The late James Baldwin explained this much in his seminal essay “Everybody’s Protest Novel,” published in 1949. He noted: “It must be remembered that the oppressed and the oppressor are bound together within the same society; they accept the same criteria, they share the same beliefs; they both alike depend on the same reality.” For black America, its relationship to its oppressor, America, shaped its identity. Hence, imagining a black America void of oppression is to create a separate black America altogether, one that is not recognizable and void of ourselves. At the same time, America void of oppression wouldn’t be America either.

This is our burden. Our humanity depends only on the acceptance of who we are. And it's something I'm learning not to run from, which is brutal and taxing, to say the least. But I'm not sure there exists a safer location inside the cage.