This has always been America: Ferguson and our dangerous delusions on race and democracy

We believe we're the world's champion of freedom. In reality, we torture, invade, violate rights, stop and frisk... 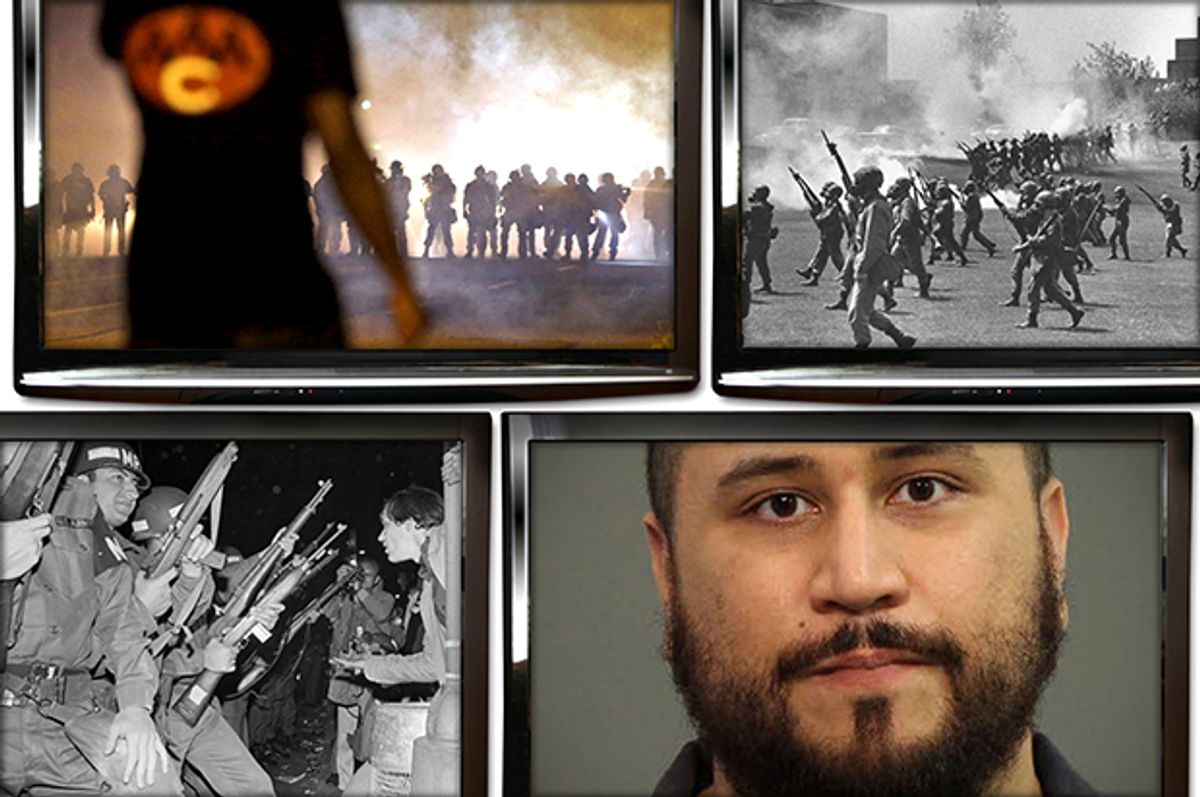 Politicians both left and right turn to the troubling doctrine of American exceptionalism to justify unilateral military intervention abroad, but what happens when we turn that dangerous delusion of unbounded moral supremacy against our own citizens on our own soil?

This is what’s happening in Ferguson, Missouri, right now, where it’s clear that the police have made an exception to the modus operandi of rights-based democracy by silencing and arresting journalists, seizing and firing on unarmed and peaceful demonstrators and applying military-grade armaments to do so.

And, lest we forget, they have initiated this armed state of exception to cover up for and suffocate dissent against the gravest rights violation of them all: the police shooting and killing of a fleeing, unarmed black boy, who never received due process for daring to step off the sidewalk.

As the nation and the world watch, horrified, at what’s transpiring in Ferguson, we don’t need to ask whether there’s a racial element in play when an overwhelmingly white police force, strapped to the teeth, is exercising extreme state authority to corral and suppress the reactions of a black community mourning the inexcusable loss of one of their children. But how is it possible for this to happen in a nation that proclaims itself the world’s greatest champion of freedom and democracy?  The answer, in part, is the logic of exceptionalism.

American exceptionalism — perhaps the most prominent of exceptionalist doctrines — is the idea that the U.S. is qualitatively different from and morally superior to the rest of the world, such that it should act and be treated according to its own special set of rules. We’ve seen this kind of logic in action for decades now. It might not be wholly moral to suspend or violate the law and threaten violence against anyone who stands in your path; but if you believe you’re saving the world from communism, terrorism, “rogue states,” dictators, Muslim “extremists,” nuclear threats, or “suspicious persons,” it becomes a lot easier to justify abridgements of rights and abnegation of sacredly held legal and moral codes.

The U.S. government that admits it “tortured some folks” doesn’t generally believe that torture is OK; instead, it made a few exceptions.

The U.S. Constitution doesn’t generally suggest it’s OK to stop and frisk, let alone shoot citizens of any race or creed without reasonable suspicion and cause; but under the “right” circumstances, we make exceptions.

The objective is never to violate rights, compromise sacred principles and murder the innocent; the objective is to "save the world," which the proponent of exceptionalism sees as a den of iniquity, decaying all around us. The logic of exceptionalism works, then, by falling into and rhetorically reinforcing the delusion that your moral superiority puts you above the laws and customs of everyone else.

For this reason it’s crucial that we understand how this logic of exceptionalism works, whether in matters foreign or domestic. The logic of exceptionalism means that someone can always make an exception of you, or of the codes in place meant to protect you. The same groups who rallied behind actual criminal Cliven Bundy’s resistance to the federal government are nowhere to be found after Ferguson police shot unarmed Michael Brown and then all but declared martial law in Ferguson.

The people threatening census workers who show up on their property weren’t protesting when black Arizona professor Ersula Ore was cuffed and slammed to the ground for jaywalking around a construction site.

The most skeptical, rights-aware libertarians remain silent when the world tries to justify the physical assault, strangling and shooting of black Americans by saying they shouldn’t have “resisted arrest” or feared the imposing white man with a gun trying to tackle them for no conceivable reason. “Don’t tread on me,” “Second Amendment solutions” and the occasional “refreshing” of the “tree of liberty” “with the blood of patriots and tyrants” only become slogans of the most extreme and at times violent white resistance, against which the actions of questioning black professors and scared black youths are mild and rational by any axis of comparison.

It would be easy enough to account for this disparity of support for the victims of government overreach by calling it hypocrisy; but it’s bigger than that. This systematic, racial partitioning of who is allowed to resist and keep their life and dignity is the logic of exceptionalism in action.

As the St. Louis County police chief says, “we’ve done everything we can to demonstrate a remarkable amount of restraint.” The only way he could plausibly understand the actions of Ferguson police as remarkably restrained is if he considers his purpose morally and circumstantially exceptional, bigger and more important than the Bill of Rights itself. To believe as much requires a heavy dose of delusion.