Ferguson divides the right: Conservatives split on blaming the police or the New Black Panthers 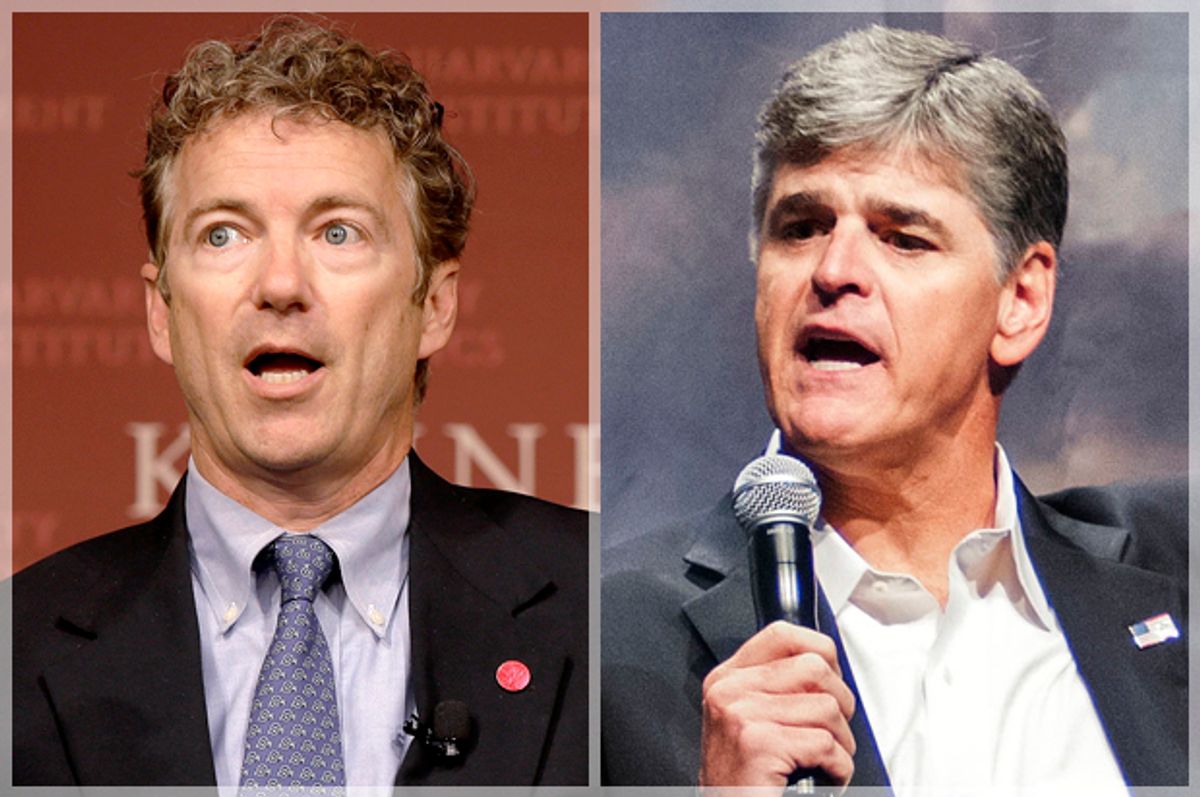 It’s a bit difficult to fathom the sort of person who would defend – explicitly or implicitly – the conduct of police officers in Ferguson, Missouri, over the last week . The people tasked with protecting the community and enforcing the law transformed the small city into a mini-war zone, with explosions in the streets, assault rifles trained on unarmed protesters, rubber projectiles fired in abundance, and tear gas canisters fired through residential neighborhoods. Along the way they arrested a couple of journalists for no reason, threatened to arrest a few others, and deployed tear gas against a TV news crew.

And they did all that in response to protests over the fatal shooting – by a police officer – of Michael Brown, an unarmed black teenager. Those protests escalated (into riots and looting, in some cases) after the police refused to release the name of the officer or any other information that might help explain why a young black man was killed at the hands of a police force that has long faced accusations of racial discrimination. After the governor stepped in and put the highway patrol in charge of security, the Ferguson police finally came forward with some information: the name of the officer who killed Brown, and a police report and video surveillance footage implicating Brown as a suspect in the robbery of a convenience store. Releasing the video only stoked further outrage, as it appeared that the Ferguson police were trying to disparage the character of the victim (the police chief later acknowledged that the robbery had nothing to do with Brown's shooting). The Justice Department had asked the police not to release the video out of concern that it would spark unrest.

That’s not a track record anyone can be proud of (save for the St. Louis County police chief, who described the above actions as the product of “a remarkable amount of restraint”). And yet, segments of the conservative pundit world are doing what they can to defend the Ferguson cops, or least deflect blame for the escalation away from them.

Last Wednesday night, as Ferguson police were lobbing tear gas at peaceful protesters, Fox News’ Martha MacCallum, sitting in for Megyn Kelly, put together a news segment and a panel discussion on the threat posed by the presence of one or two New Black Panther Party members among the protesters. “Let's start with this, this Black Panther issue,” MacCallum told her guests, “because the FBI is very concerned about this and when I went on the Facebook page today of the leader of this group, Chawn Kweli, it was astonishing to me the things that he is saying on his Facebook page.”

That same evening, Sean Hannity interviewed Ferguson police chief Thomas Jackson and teed up some leading questions that helped Jackson cast police actions as a response to violence from protesters. On the issue of concealing the identity of the officer who shot Brown, Hannity prefaced the question by citing the New Black Panthers, Louis Farrakhan, death threats, Al Sharpton, threatening graffiti, and looting:

HANNITY: I understand that the police officer – there’s been a lot of death threats against him, a lot of volatility. You’ve got the New Black Panther Party, Louis Farrakhan has spoken out, the Reverend Al Sharpton is there. You’ve had the chanting – you have a sign up there, the only good cop is a dead cop. There’s been rioting and loot, etc. going on. That has prevented you from releasing the name of the officer. Some have questioned the wisdom of that – the public’s right to know versus the safety of the officer. Are you balancing that?

On Friday night, glibertarian homunculus Greg Gutfeld gave the Ferguson police every justification for their actions. "You can't stop anarchy with a stern look," said the same guy who used the word "fascism" to describe people who complained about an airline's promotional video.

Even before the Ferguson police released any info pertaining to Brown's involvement in the convenience store theft, a sizable portion of the online right was doing everything it could to paint Brown as a dangerous gang member (with the all-too-obvious suggestion that his death was deserved).

Reactions like these are noteworthy not just for their implied tolerance of real abuses of authority, but also because there were plenty of other conservatives who harshly came down on the Ferguson police. The general thinking is that the right is divided between the tough-on-crime conservatives who will always give the police the benefit of the doubt, and the more libertarian-leaning conservatives who view police abuses as violations of civil liberties and an extension of out-of-control government. “If you want an indication about where someone sits on the dividing line between conservative and libertarian, sometimes it’s as simple as how they answer this question: how do you feel about cops?” The Federalist’s Ben Domenech wrote Thursday.

But the fact that this divide persists even in the face of such flagrant abuses as the ones we saw in Ferguson suggests something else is at play, and I think part of it comes down to how certain conservatives define their worldview. People like Hannity and Fox News cretins who troll around on Twitter identify as conservative, but often it seems like a lot of the opinions they espouse are simply “anti-liberal.” It’s ideology by reflex: If liberals support it, I don’t; if liberals hate it, I support it.

And so when protests erupt over a cop killing an unarmed black teenager, it's crucial – absolutely crucial – that photos of the victim flashing "gang signs" be plastered all over the internet. When Ferguson police use military-grade weaponry against unarmed people protesting what they believe was a racially motivated shooting, it's necessary to point out that there are some very dangerous New Black Panthers in the area. When a couple of “liberal media” reporters get roughed up and handcuffed in a McDonald's by cops who “didn’t know better,” some conservatives take the side of the cops because the alternative – siding with the liberals – is anathema.