When it comes to the right's attitude toward poverty, they can change the name -- but the recipe's always the same 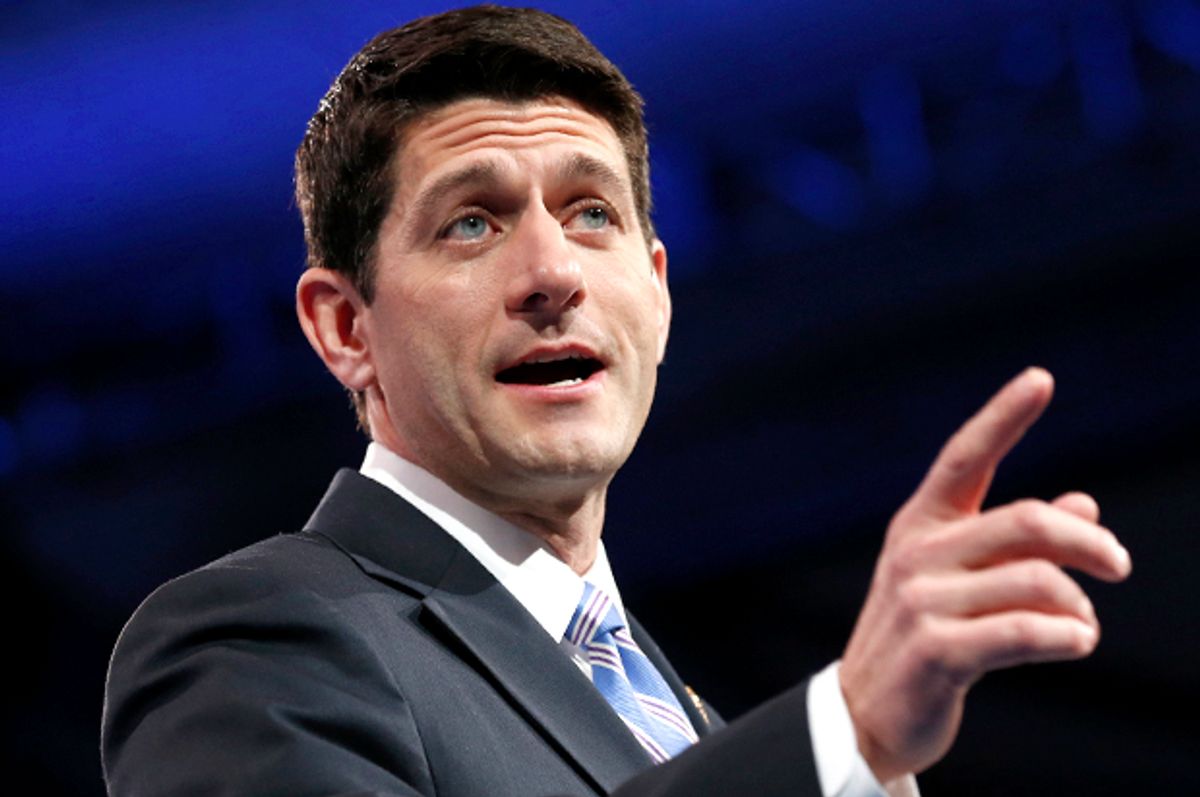 Did you ever think you would see Forbes magazine print an article with the title "The U.S. Middle Class Is Turning Proletarian" that says “the benefits of capitalism need to be more widely shared”? And a New York Times piece that warns that "The Middle Class Is Steadily Eroding, Just Ask the Business World"?  Now, with "inequality" becoming a household word, prominent Republicans like Paul Ryan have hopped on the anti-poverty bandwagon in fear of what this state of affairs will do to the GOP in the coming elections.

Tomorrow, Ryan, who has spoken frequently about poverty this year, releases his new book "The Way Forward: Renewing the American Idea." In it, he of course blames the progressive movement for having brought ruin to this country.

When it comes to combating inequality, Republicans' new strategy is called democratic capitalism, reform capitalism, enlightened capitalism,  globalized capitalism or reform conservatism and all suggest that the right has changed its position. But has it?

While the language is like the one spoken by Democrats for decades, it comes from a different set of beliefs and principles. The meat of the new anti-poverty platform stems directly from the old original conservative value system.

Probably the most basic tenet of the conservative view of poverty is that it's caused by the poor. This goes back to the Charity Organization Societies in the 1870s that sent out “friendly visitors” to reform the families getting poor relief whose poverty was said to be due to their own immoral and shiftless ways. Today similar Republican opinion ranges from that of the moderate columnist David Brooks to the Tea Party and it all goes back to the same orthodoxy.

In a recent column Brooks wrote that poverty is strongly related to single motherhood, high school dropout rates, the breakdown in family structure and “the fraying of [the] social fabric.”

“Low income is the outcome of these interrelated problems," he writes, "but it is not the problem." It is a “human capital” problem. Brooks' solutions are to focus on bad schools, broken families,  neighborhoods without mediating institutions. Poverty itself is a secondary issue and a statistical byproduct.

Ryan puts it more directly in his 204=page pre-budget report:  “Perhaps the single most important determination of poverty is family structure.” Ryan has said that there is a “culture in our inner cities in particular, of men not working and just generations of men not even thinking about working,  He plans to “strengthen or consolidate” the safety net programs that have created a “poverty trap” and are keeping families dependent on them and poor.

The value to conservatives of turning the cause of poverty onto the poor is that then nothing structural needs to be done. We need only reform the poor and reform the programs that are making them poor.  Brooks writes that we cannot assume that the growing affluence of the rich is causing the immobility of the poor.  With this kind of logic the government need not be concerned with redistributing resources from the rich to the poor to alleviate poverty.

But what have Republicans suggested should be done? The earned income tax credit has been a successful way to reduce poverty since 1975 when President Gerald Ford made it law. It has raised the incomes of millions of families to above the poverty line and acted as a work incentive for single mothers when the 1996 welfare reform rolls dropped dramatically.  The credit forgives the federal income tax for low-wage workers -- largely female heads of families -- and annually refunds their taxes if wages are low enough.

President Obama’s budget proposals call for an expansion of the credit and extending it to childless couples and single adults. The president, in his State of the Union address, said that not many programs “are more effective at reducing inequality and helping families pull themselves up through hard work than the earned income tax credit.”  To his credit, Ryan would keep the EITC and also extend it to childless people,  but Sen. Marc Rubio’s plan for a Republican budget is to do away with the EITC.  Instead he would replace the earned income tax credit with a federal wage enhancement subsidy for qualifying low-wage jobs. Why?

The wage subsidy that Rubio is promoting is a monthly benefit, not an annual one, so that there is less chance of fraud in determining wages over a year. It is also more closely tied to work as the worker has to work every month and cannot use time not worked to arrive at a yearly earnings figure. This too prevents fraud.

But by far, the most entrenched motivation is the conservative dread of fraud and dependency.  Paul Ryan in 2012 said, “We don’t want to turn the safety-net into a hammock that lulls able-bodied people to lives of dependency and complacency.”  Thus a program that is open to fraud and that theoretically reduces work effort is not to Republicans' liking.  In fact, many studies have shown the opposite -- that the earned income tax credit increases work effort..

Rubio’s proposal “that we turn Washington’s anti-poverty programs and the millions spent on them over to the states,” and Ryan’s “new” idea of “Opportunity Grants” are the most radical so far.  Ryan would abolish most means-tested programs and consolidate their funding into a single grant to be given to each state. The states would decide how and on what programs to spend the money. This would presumably increase coordination, give the states flexibility and be more attuned to local needs.

States or localities would then contract with those individuals or families  receiving benefits so that they would take certain steps to become independent of welfare.  Each family would have a case manager to coach it into the moral life. What a throwback to the 1870s when the price of getting economic relief was emotional and character rehabilitation through the Charity Organization Societies. Again, it is the individual who needs reforming, not the society.

The beliefs underlying the single state grant idea stem from the conservative distaste for federal funding and federal oversight. The states, in combination with nonprofits and religious organizations, have long been preferred to central government.  The key words are “local needs” and “experimental solutions,” which means that programs are not subject to laws and regulations but can be changed to suit the prevailing political conditions.

Programs would also be subject to the size of federal funding in spite of Ryan’s promise that funding would not be cut.  Like block-grant programs, states would need to stay within federal funding limits no matter what their needs were. The bet is, of course,  that the states would be less liberal than the feds.

And that is exactly what happened with the welfare program, Temporary Assistance to Needy Families.  Since 1996 when the original open-ended welfare program, Aid to Families With Dependent Children, was changed to a block grant to the states, the number of families receiving it has dropped by more than 60 percent. A 2012 report by the Center on Budget and Policy Priorities says that “TANF provides a greatly weakened safety net that does far less than AFDC did to alleviate poverty and hardship.”  Republicans have lauded this dramatic change and refer to the block-granting of welfare as a model for other programs and a model for the current “Opportunity Grants” proposal.

Given the very high rate of inequality, poverty and unemployment and the appearance that the Republicans don't care, some have called this a "moral crisis" for them.  Most obviously it is an electability crisis. But the anti-poverty strategies that Republicans have undertaken to respond to this crisis clearly stem from their traditional conservative ideology. That has not changed. Ryan promises “a sweeping overhaul of social programs” and in his new book insists that the Republican Party remain true to its conservative principles. If given the chance,  they will, without doubt, dismember the existing safety net in line with their ideology.