The truth about "gluten snobs" 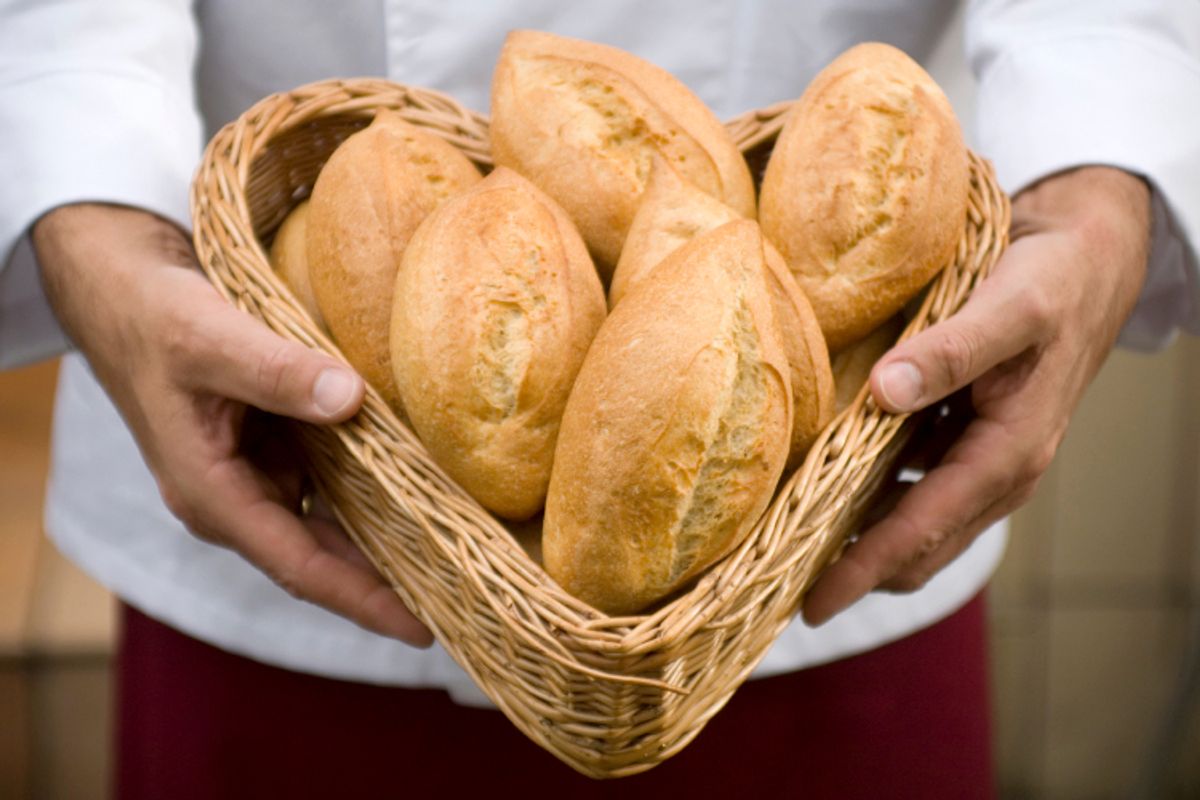 "My body was completely breaking down, but I had no idea what was going on,” Beatriz Rodriguez said, describing the nine years that passed before she was diagnosed with celiac disease. The actor had suffered from digestive problems since childhood and had her gallbladder removed at age 12 but did not experience any relief after the surgery.

“It was so normal for me to feel bad that I didn’t think twice about it,” Rodriguez said, listing stomach problems, low energy, insomnia, extreme fatigue, acne, depression, weight gain and brain fog as some of the symptoms she experienced. She knew her symptoms were related to food, but neither she nor her doctors could diagnose them. Over the years, she tried alternative medicine, acupuncture, holistic doctors, kundalini yoga and Chinese medicine in attempts to find a cure.

“After many doctor’s visits and endless tests, I finally took matters into my own hands,” Rodriguez said, explaining that she began the Candida diet in an attempt to treat what she thought was Candidiasis overgrowth; the diet eliminated gluten, dairy, alcohol, sugar, fruit, vinegar and a long list of vegetables.

The diet helped Rodriguez considerably. “I finally felt free for the first time in my life,” Rodriguez said, explaining that she slowly began to introduce foods she had eliminated back into her diet, and after a week of eating the way she had prior to the diet she began suffering from extreme diarrhea for that lasted for three months before going to a doctor because “at that point, I believed they could be of no help.”

Rodriguez requested that she be tested for celiac disease and the tests came back positive for not only for celiac, but hypothyroidism and dairy intolerance as well. Since her diagnosis and the elimination of gluten from her diet, her health, energy and mental clarity have all improved drastically.

Jessica Phillips experienced severe abdominal pain prior to eliminating gluten from her diet. She said it felt like she was "being stabbed from the inside out.” She also experienced such extreme bloating she appeared to be six months pregnant.

Phillips did not have health insurance at the time, so she chose not to undergo tests to be diagnosed with celiac disease; instead she underwent an elimination/reintroduction test and found her health and energy level were greatly improved when she stopped eating gluten. “When I eat [gluten], I feel like I have to completely shut down for a while,” she said, adding that she feels “amazing” when she does not consume it.

Missi Nespolo has tested negative for celiac disease twice but chooses to maintain a gluten-free lifestyle due to the severe intestinal issues, migraine headaches, sinus infections and dermatitis, as well as severe exhaustion she believed was a result of consuming gluten. Arielle Hernandez-Lavadenz, who suffers from endometriosis, chose to eliminate gluten from her diet after undergoing laparoscopy procedure to remove endometrial “adhesions” in an effort to maintain the estrogen balance in her system.

All of these women suffered from different symptoms and chose to eliminate gluten from their diets for different reasons. But they all share one thing in common: their frustration with increasing media coverage that implies gluten sensitivity is a myth rather than a medical condition that warrants respect and attention.

"There are several different kinds of harmful reactions to gluten ingestion,” said Alessio Fasano, director of the Center for Celiac Research and Treatment at Mass General Hospital for Children and co-author of Gluten Freedom: The Nation's Leading Expert Offers the Essential Guide to a Healthy, Gluten-Free Lifestyle. In a statement following the August 5 announcement that FDA standards for gluten-free labeling had gone into effect, she wrote: “Along with celiac disease, there is non-celiac gluten sensitivity, wheat allergy, gluten ataxia and dermatitis herpetiformis, an itchy skin rash caused by eating gluten. And people must be eating gluten in order to be properly tested for celiac disease; otherwise the antibodies that indicate the condition will no longer be present in their blood.”

Celiac disease is an autoimmune disorder in which the body reacts to gluten by attacking the intestinal villi in the small intestine. This causes malabsorption of nutrients and a variety of symptoms that can be manifested throughout the body. Some people with celiac disease don’t experience any symptoms at all. Celiac disease is one of the disorders on the spectrum of gluten-related disorders, while non-celiac gluten and wheat allergy are two other conditions related to gluten.

Gluten sensitivity is another immune response to gluten that appears to generate many symptoms similar to celiac disease, such as bloating, diarrhea and intestinal discomfort, and extraintestinal symptoms such as migraine headaches, fatigue and “foggy mind.” However, it is driven by a different molecular mechanism and does not result in the intestinal damage seen in celiac disease.

“There is a lot of confusion and some negative commentary out there about who needs to follow the gluten-free diet," said Susie Flaherty, director of communications for the Center for Celiac Research and co-author of Gluten Freedom, in an email interview. “Some people seem to think it is a fad that will fade away like other fad diets — this is totally untrue. The way that Dr. Fasano describes it is that for people with celiac disease, the gluten-free diet is like insulin for diabetics. The gluten-free diet is their only form of treatment, and it must be strictly followed for life to avoid health complications.”

Along with an increasing awareness of gluten sensitivity, more and more people are describing themselves as gluten free:  18% of adults now buy gluten-free foods, according to Packaged Facts, and the New York Times reports that 30% of people says they want to eat less gluten. Yet there have been an increasing number of articles and statements in the media stating gluten sensitivity is a myth and has been disproven by the very people who first brought the subject into the public eye.

“There are several factors at work here,” Flaherty said. “One is the many celebrities and athletes who have embraced the gluten-free diet and give it glowing testimonials. Another is the inaccurate reporting about who needs to follow a gluten-free diet. For people with celiac disease and other gluten-related disorders, the gluten-free diet is a medical necessity that has been recognized as the only medical intervention for this condition for many decades. In this instance, to call the gluten-free diet a ‘fad,’ is completely false.”

Beatriz Rodriguez’s social life has been affected the most since eliminating gluten from her diet. “Traveling and eating are my favorite things, but now I know that it will be more difficult to travel frequently and experience different food cultures,” she said. “Another challenge has been family. Some family members refuse to understand. They think it’s for attention or that I’m exaggerating when I have to ask what it is in the food, how it was prepared, etc. I attribute this to their own insecurities, though. Food is extremely emotional and it triggers something in them, but it is very frustrating on my end.” She said that in Los Angeles, being gluten-free is seen as a trend; only when she explains she has celiac disease is she taken seriously.

Flaherty said there are several reasons for the rise in gluten-related disorders. “One is that there has been an increased awareness about celiac disease and gluten sensitivity. The popularity of the gluten-free diet, whether it is used for medical necessity or other health reasons, is another reason. The gluten-free diet is the most popular diet ever, and most of the people who are estimated to eat gluten-free products and follow a gluten-free diet do not do so out of medical necessity. Another aspect in the rise of reporting of gluten-related disorders is because they are on the rise. From our research, celiac disease has risen five-fold in the last four decades.”

Nespolo found after adapting her lifestyle, she was frequently questioned by her peers when eating with them at a restaurant. She said she felt her medical needs were not taken seriously. “People are so bitter about the gluten-free diet. I get a lot of eye rolls, a lot of ‘Do you actually have an allergy or [are you] just on a diet?’ and other rude comments. If someone says they can’t have shellfish, you assume it’s important, but gluten allergies are first thought of as a fad that people can disregard.”

“Eating out and social events can be particularly challenging for patients who must follow the gluten-free diet,” Flaherty said. “Controlling your food at home is much easier than trusting your food preparation to people who might not know how important it is for you to avoid all foods containing gluten — and there are a lot of them. Gluten is found in many unexpected places, so our patients have to speak up and speak loudly to make sure that they and their families are eating safely.”

Arielle Hernandez-Lavadenz chalks up the negative reactions to her lifestyle to government-established societal norms. “When a consumer movement pitches a fit against a long-standing government subsidy there will always be detractors," she said. "Where are said detractors getting their information? Who is paying for the studies they cite? Odds are it will lead back to long-standing, entrenched government/private sector agreements to maintain the wheat-laden American diet status quo.”

“Being a gluten-free diner and cook costs more,” she added. She says it costs an extra $2 for gluten-free bread and $4.50 for a gluten-free cupcake, not to mention the time spent questioning waitstaff at restaurants about ingredients in food. “Having worked in the service industry in various roles, I try to be courteous and extra nice to every single server that ever has to take my order. That said, both the intricacy of questions regarding gluten and the patience required on behalf of waitstaff, have turned ordering into a lengthier and more intimate process."

“Why does everyone care so much about the diet of others? If it isn't for you, then don't do it,” Missi Nespolo said, expressing her frustration with the negative commentary on gluten-free lifestyles as well as the reports frequently posted on social media. “If it's working for someone else, why judge them? Even if they aren't gluten-intolerant for real, if the diet is helping them maintain a healthier lifestyle then let them make their own decisions and choices....Live your life in a way that makes you happy and satisfied and allow others to do the same.”