Matthew Weiner's disastrous "Are You Here": Why it's so hard for showrunners to follow up a hit TV show

The "Mad Men" creator is famous. He's critically beloved. And now he has a genuinely bad movie to his name 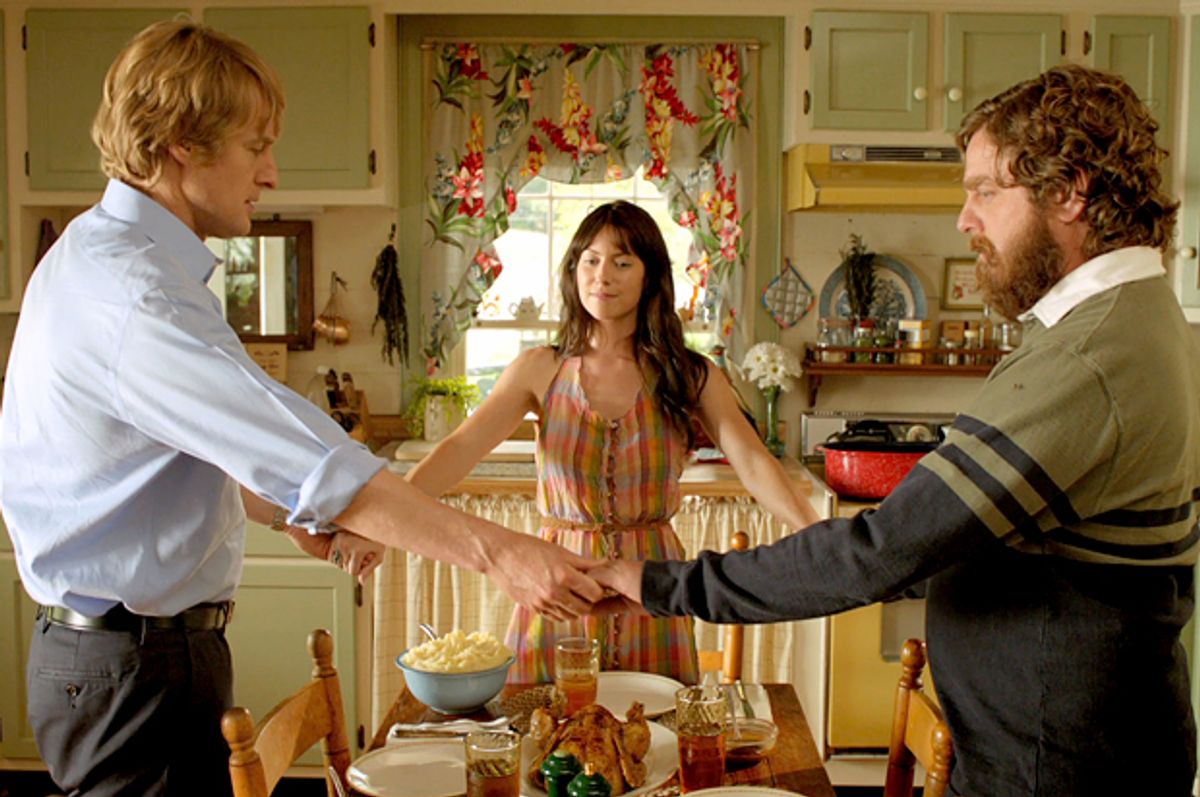 "Mad Men" fans, enjoy Matthew Weiner's brilliance as a showrunner while you can. Because history -- as well as Weiner's own work -- suggests that once "Mad Men" ends next year, there's nowhere to go but down.

Weiner, who for seven seasons has made "Mad Men" a must-watch for those who prize thinky entertainment, is set to release his directorial debut, the film "You Are Here," tomorrow. It is not good. Indeed, the only commonality it shares with "Mad Men" is the sense that there was little interference between Weiner's ideas and what ended up making it to the screen -- but while "Mad Men" is complicated and dreamlike, "Are You Here" is just convoluted. For nearly two hours, Owen Wilson, playing a TV weatherman, involves himself in the family affairs of a brother and sister (Zach Galifianakis and Amy Poehler) who inherit, respectively, far more and far less than they'd hoped from their late father. (The "far less" number is still in the six figures, though we're meant to feel bad.) There's a trial, a bar fight, endless scenes of Wilson taking bong hits. It's a meandering, strange story that has little to say -- it's about, as far I could tell, themes of disaffection in American life that already felt tired in "Garden State" -- but spends a wearyingly long time trying to communicate them.

And, as a dud project released by a showrunner preparing to wrap up his main gig, it's not alone. David Chase's tepid 2012 rock movie "Not Fade Away" was no "Sopranos." "Treme" is hardly a disaster, but its slow pace and jazz wonkishness have made it a punch line in a way David Simon's previous series "The Wire" never was. David Milch's "John From Cincinnati," which came immediately after his "Deadwood," is a famous TV bomb. And before "The Avengers," Joss Whedon struggled to find a post-"Buffy" foothold on TV, with "Firefly" and "Dollhouse" collecting some admirers but not much in the way of real commercial success. In the recent history of TV's prestige dramas, no one is batting 1,000.

Why is it so hard for iconic TV producers to hit their next project out of the park? Sure, part of it may be the pressure to innovate. A movie director with a fixed style can continue in that vein forever, finding slight variations in mood and subject matter. But TV shows, if they're any good, run long enough that they tend to exhaust every conceivable idea and angle about a given subject. Matthew Weiner is very good at using the 1960s as a template to explore the nature of American masculinity, but it's hard to apply that as a rubric to future projects.

Another problem of the famous showrunner is that the bigger they get, the more total their creative control is. Who on the set is going to tell Matthew Weiner that his script needs to lose 25 pages and that Amy Poehler's character can't be quite so irredeemably humorless? Emboldened by years' worth of praise and unfettered by a writers room, the showrunner can disappear into his own navel. More than anything, "Are You Here" feels like the product of a creative person struggling to make himself heard in an unfamiliar medium; Weiner, deprived of the luxurious length of a 13-episode season, just keeps adding and adding to his screenplay when someone should be helping him pare things away.

The TV golden age has taken us a long way from the mega-producer who can plug his sensibility into any project; there are no thinking man's Aaron Spellings out there. Weiner has the luxury of being able to do whatever it is he wants, and the problem of only having practiced a very specific sort of storytelling on a proscribed set of themes he can't reprise for fear of looking uncreative. But the story's hardly over; "Are You Here" is now out of the way. Maybe Weiner's next project, benefiting from his experience on his first ever movie set, will be his great one. After all, if anyone knows how to write his way out of a high-class problem, it's the guy who gave us Don and Betty Draper.