As we near the formal general election season, impossibly stupid ads are emerging everywhere. Let's mock them 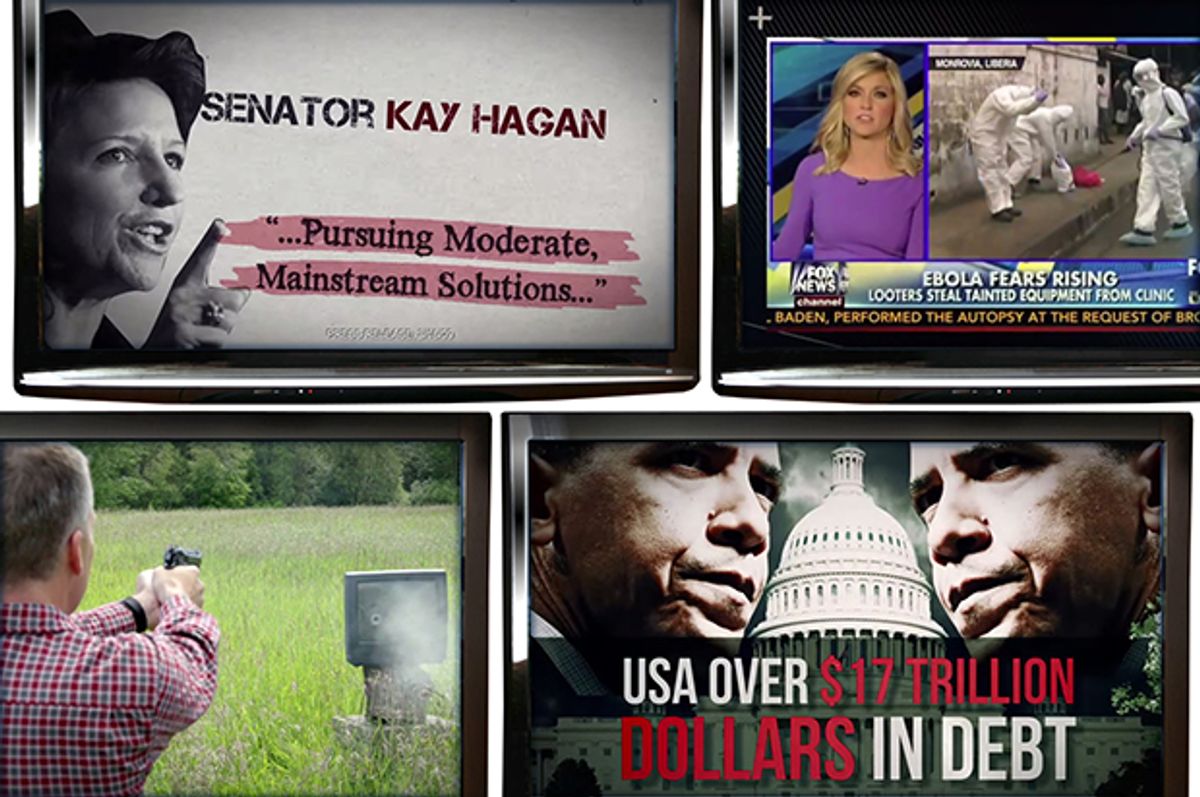 It would have been nicer if it could have waited a week, until after Labor Day, so everyone could "refresh their batteries" before having to deal with it. But the inevitable Cambrian Explosion of masterfully stupid general election ads has arrived this week as campaigns pivot away from the primary battles of yore and into the dark, depressing homeward stretch.

By Tuesday afternoon, four of the most ludicrous attack ads of the cycle had already appeared this week, and Science suggests that they will keep getting dumber as Election Day nears.

Let's make fun of them.

Here's the first installment of General Election Stupid Ad Watch, a recurring Salon Politics feature that will appear each ... week? ... month? ... let's go with "whenever a fresh batch of dumb ads comes out all at once and thus can be easily aggregated into a single column."

If anyone watches either of these ads and is convinced that they need to vote for a Republican Senate candidate in order to safeguard against cuts to Social Security and Medicare, God help this country. (There will probably a bunch of people who do exactly that! Where's your God now? Ha ha ha ... ehh.)

As Greg Sargent notes, the citation in the Hagan ad is to an old interview in which she says some generally nice things about the Simpson-Bowles deficit reduction plan. Pryor and Hagan probably employ some shitty advisers who told them, Well, you're Democrats in conservative districts, so you should nominally support this Smart Centrist plan to prove your deficit-cutting bona fides, without realizing that the reason Simpson-Bowles went nowhere is because no one likes it and it contains features that are politically unpopular. Let that be a lesson to Democrats in red states: Don't try to win over conservative voters by supporting deficit reduction, because major deficit reduction -- as in, non-"take away food from poor people" stuff -- is unpopular among them too, which is why it hasn't happened.

It's both stunning and completely in-character for Rove to go this cynical on Hagan and Pryor for having said vaguely supportive things about Simpson-Bowles. Consider what, uh, Karl Rove himself wrote less than a year ago:

This moment is reminiscent of Mr. Obama's bungling of the December 2010 Simpson-Bowles Commission report. He didn't just fail to act on its blueprint for righting the nation's finances—he acted as if he'd never heard of the commission that he appointed. If the president had embraced Simpson-Bowles and worked to pass its recommendations, he would have been handsomely rewarded. Instead he opted for partisan stalemate and acrimony.

And now Hagan and Pryor are beneficiaries of the "handsome reward" from Karl Rove that silly Barack Obama passed up.

And here's Mark Pryor returning the favor, pointing out that everyone in America's going to get the Ebola virus and die because of Tom Cotton.

In this next videotaped #hottake, we find Alaska Republican Senate candidate Dan Sullivan firing a couple of rounds into a television set, in "average dad" clothes while class "tuff dad" country-rock jingles in the background. The ad is ostensibly an attack on Sen. Mark Begich's backers for flooding the airwaves with negative attacks ... but it's mostly Dan Sullivan saying, I'm Dan Sullivan and I love me some guns. I love whippin out mah pistol and shootin up that there idiot box and sich. I got that jibber-jabber machine good, one in each eye. BANG BANG, tee hee! I have a big penis; let me be a senator.

And finally, there was also that insane ad from New Mexico GOP Senate candidate Allen Weh that included footage of James Foley's beheading. Elias didn't embed it so I won't either. (James Foley beheading = Obama's bad leadership = Sen. Tom Udall is bad too, is the gist of it.)

That's enough for this inaugural edition of the General Election Stupid Ad Watch! Part Two will appear ... later ... sometime after the apocalypse.