"Principles be damned": How basic reform could get crushed in a liberal state

In California, reform to shine light on big political donors is on verge of losing. Here's a surprising reason why 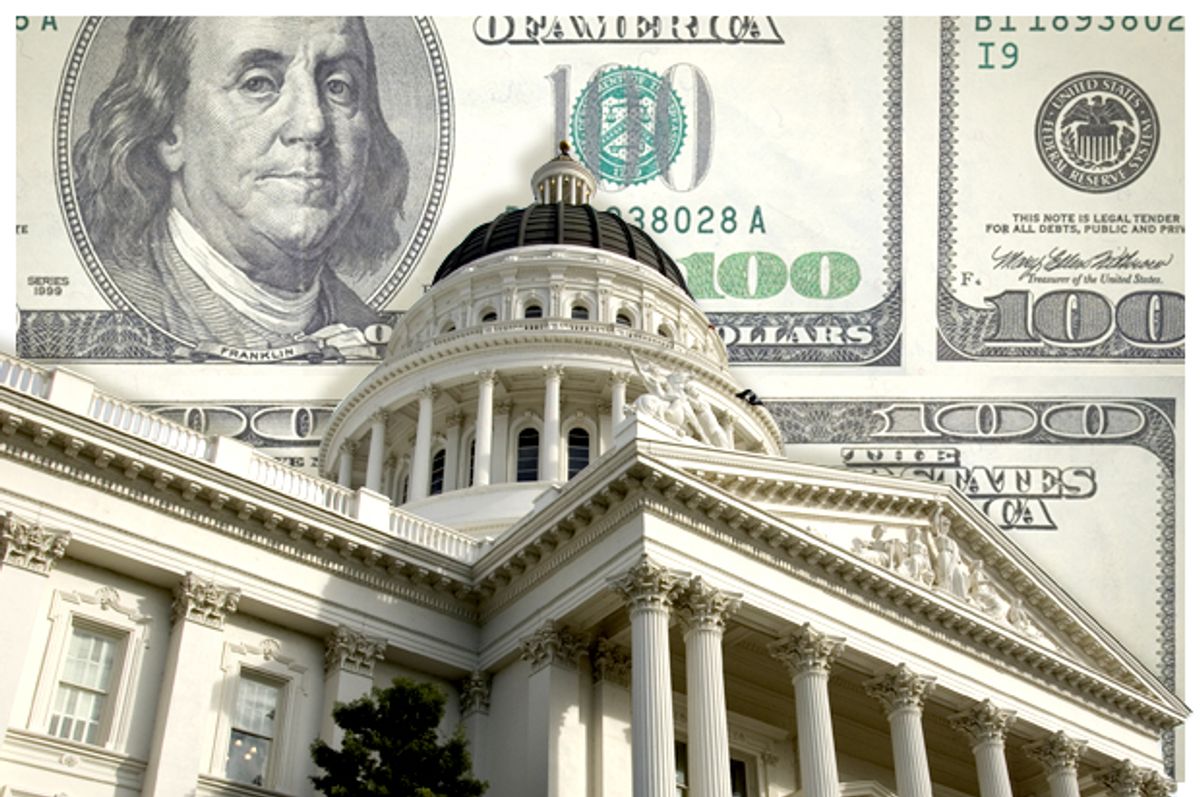 The biggest reason why it will be so hard to get money out of politics is that there’s so much money in politics. The system favors incumbents, from incumbent politicians to their incumbent funders. And they have little incentive to shake up the status quo that brought them to power, even if their constituents and their ideological principles call out for reform.

This is precisely what’s playing out in California. One of the most liberal legislatures in the country has struggled to pass a campaign finance measure that would merely force disclosure on political advertising, because several labor unions that spend heavily on campaigns oppose it. This has infuriated progressive groups in California and across the nation.

The bill, known as the California DISCLOSE Act, is based on the national DISCLOSE Act that came within one vote of passage back in 2010. It would require all political advertising to prominently display the names of the three largest funders, whether on print, radio, mailer, billboard, Web or television spots. The names would have to be the actual original funders, not some fake front group like “Californians for a Better World” or something. The DISCLOSE Act also require campaign committees to publish a website for voters, listing all funders who donated $10,000 or more.

A number of corporate-backed campaigns have gotten their way in ballot measures in California over the past several years, and reformers believe those would not have succeeded had voters known who funded the ads. “If it passes, the California DISCLOSE Act will be by far the strongest on-ad disclosure law in the country,” said Trent Lange, president of the California Clean Money Campaign, a key organizing group behind the bill. “It can be a model for the nation.”

Democrats in the Assembly passed the DISCLOSE Act back in 2012, but it did not clear the Senate. Supporters introduced a new bill, SB 52, in 2013, and with a larger Senate majority, it passed, even garnering the vote of moderate Republican Anthony Canella. The state Assembly represents the final hurdle.

Over 400 progressive organizations have endorsed SB 52, and House Democratic Leader Nancy Pelosi called it “fundamental to our democracy and fairness in our system in every way.” But labor has always been lukewarm, presumably because the current system works for them. In California, unions like the State Council of the Service Employees International Union (SEIU) and the California Teachers Association (CTA) spend lots of money on political activity. A 2010 report of the state’s Fair Political Practices Commission (FPPC) put CTA and the SEIU State Council 1 and 2 in spending on ballot measures, candidates and lobbying.

SEIU first asked for 18 amendments to the bill, which the authors obliged. They increased the disclosure threshold from $10,000 to $50,000. They excluded ads from state political parties from the disclosure requirements. They reduced the number of funders displayed on robocalls and radio ads from three to two. And they eliminated the requirement for the disclosure website showing the top 10 funders. They even narrowed the bill to only cover ballot measures rather than candidate independent expenditures.

Despite all these changes, SEIU announced its opposition to SB 52 anyway (which makes you wonder why Democrats decided to keep their changes in the bill). SEIU particularly opposes the provision that the “identifiable contributor” gets disclosed, instead of the front group funders typically hide behind. This is really the heart of SB 52, as current law already compels disclosure of the front groups. Bill authors asked SEIU for a year to come up with something acceptable that still forced disclosure of funders, but the union declined. SB 52 has the FPPC decide who qualifies as an identifiable contributor, and SEIU seized on this, arguing in its opposition letter that it “grants the Commission unprecedented authority.”

But that’s a technical red herring; SEIU gives its real rationale a bit later in the letter, when it cites weaker bills on campaign transparency as sufficient. “There is no reason to make any additional changes,” SEIU concludes.

Other unions followed SEIU’s lead. In an example of the need for transparency, it’s hard to find formal opposition to the DISCLOSE Act on labor websites. However, Salon has obtained opposition letters from CTA, the California School Employees Association and the state Labor Federation, a coalition of over 1,200 AFL-CIO and Change to Win union affiliates.* CTA even argued SB 52 would violate the Constitution’s free speech clause, a nod to the Citizens United ruling, even though the Supreme Court in that case affirmed disclosure as a viable method to police campaign spending.

(One of CTA’s labor leaders, Tim Sbranti, who warned in a union meeting against the “unintended consequences” of the DISCLOSE Act, is now running for the state Assembly. Sbranti’s campaign did not respond to a request for comment.)

A few local unions, like United Teachers Los Angeles, support the DISCLOSE Act, but the opposition comes from the unions that spend the most money on state politics, and like things the way they are. Unions represent practically the only formal opposition to SB 52, and they are actively whipping against passage.

In California, union opposition packs a punch. Initially, SB 52 passed out of the Assembly Elections Committee with full Democratic support. But once labor started opposing, three members of the committee – Sebastian Ridley-Thomas, Jimmy Gomez and Bill Quirk – changed their votes to no or abstain. Two have since assured they will vote yes in the full Assembly, but with other Democrats wavering amid pressure from labor, passage is questionable. The vote will happen before the Legislature breaks at the end of the week.

The California Democratic Party platform includes support for the DISCLOSE Act. Democratic stalwarts who worked tirelessly to get Democrats on board with disclosure are furious at what they see as a looming betrayal. But as soon as unions decided they didn’t want their name on any ads showing their spending commitments, suddenly individual Democrats have rethought their stance.

This has caught the eye of national campaign finance reform groups. Progressives United, the organization chaired by former senator and major reformer Russ Feingold, blasted a notice to its California members, criticizing labor groups for their opposition. “Organizations on the left have to accept that dark money is a game the corporate side will always win,” said Josh Orton, political director for Progressives United. He also pointed out that political consultants make opulent sums of money from dark money ads, and wouldn’t want the gravy train to stop. “For those consultants, there’s money to be made, principles be damned,” Orton said.

Trent Lange, from the California Clean Money Campaign, says that tens of thousands of constituents have called their legislators demanding passage this week, and cites a 2011 Field Poll showing 84 percent support for more disclosure. “The California DISCLOSE Act has overwhelming support from a public that is tired of being deceived about who pays for political ads,” Lange said. “Legislators will certainly hear from all those Californians if they kill SB 52 because they listen to its opponents rather than to their constituents.”

This is what makes campaign finance legislation such a slog. You have to get the people who benefit from the old system to change it. And they prefer the certainty of a pay-to-play election architecture, where money rules without transparency, to the uncertainty of giving voters the knowledge to fairly judge competing arguments. If enough citizens demand an end to the secret slush funds and democracy sold to the highest bidder, they can force a change. But with this union opposition, the biggest post-Citizens United effort to alter how campaigns are run in America now hangs in the balance.