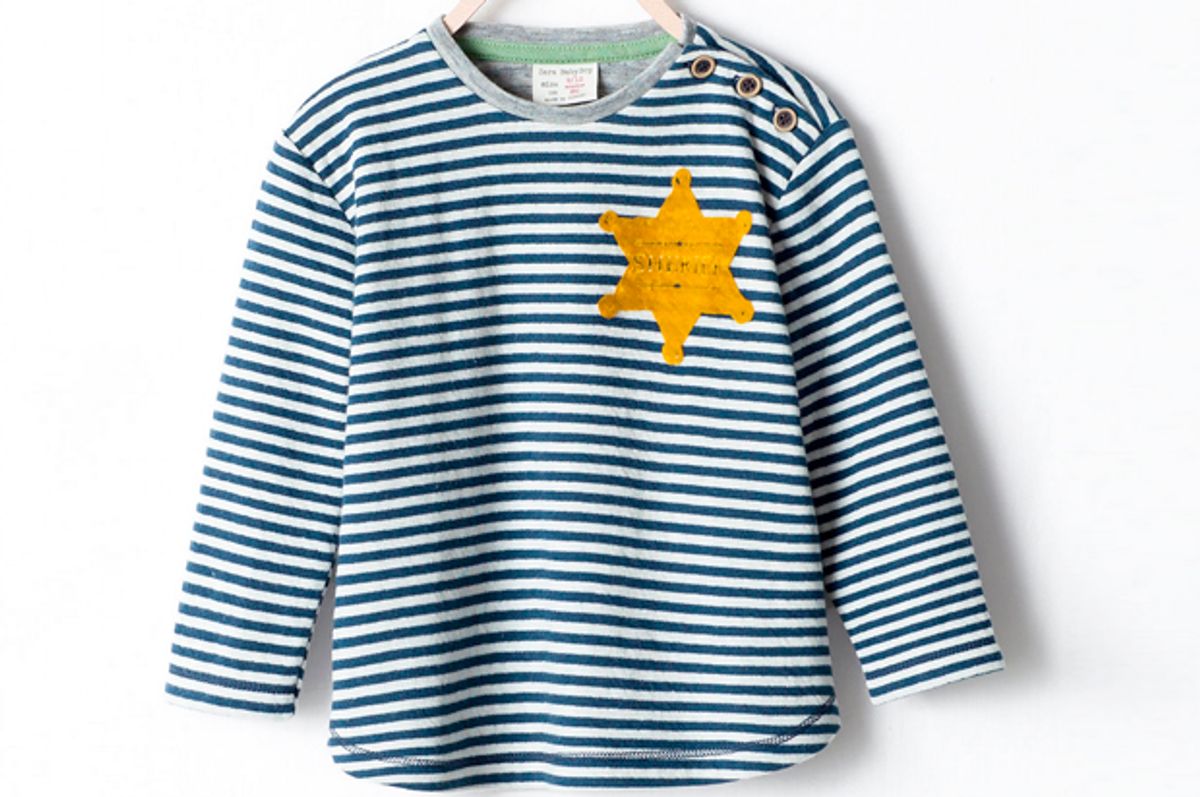 A wall of pressure forced fashion retailer Zara to pull an item of baby apparel from its shopping sites overnight. Representatives from the company issued an apology for its “Sheriff” shirt, a white, long-sleeved toddler T-shirt striped in chic Breton blue, sporting a sunny … six-point yellow star … over the left breast ... Wait, doesn’t that kinda look like a tiny concentration camp uniform? For your baby?

Apparently it’s a thin line between punk and skinhead, between looking military-chic and, well, like a genocidal monster — punk impresario and iconography omnivore Malcolm McLaren layered Nazi imagery into his early pastiche designs, thanks for that — but the line is there, and it doesn’t take a tenured historian to tell the difference.

You’d think that after Urban Outfitters caught hell from the Anti-Defamation League and people of good taste everywhere for carrying Danish designers Wood Wood’s shirt embroidered with a six-point star, fashion retailers would get on board with the very basic idea that the systematic genocide of millions is not, nor should it ever be, inspo. And yet here we are again with a Euro-chic baby concentration camp costume and an unbelievably bizarre justification from the company: “It was inspired by the sheriff's stars in Classic Western films.”

Really? I must have missed the scene in “High Noon” when Gary Cooper escapes from the Warsaw ghetto to face Frank Miller’s gang.

It’s easy to see why, devoid of historical and cultural context, these icons would be appealing to generations of designers who did not live through the Holocaust. It’s no coincidence that the angular eagle, the yellow star badge, the crisp swastika itself are compelling visuals — the Third Reich crafted one of the most effective brand identities in history, making effective use of iconography to both entice and to strike fear.

But nothing is devoid of historical and cultural context. Blithely glorifying the Third Reich is not an edgy fashion statement. How hard is it to remember that Nazi = evil? Not imaginary evil, like Chthulu or early-career Ozzy Osbourne, but actual, practical evil whose crimes against humanity still traumatize our culture nearly 70 years after the liberation of Auschwitz. Given these repeated industry offenses, I can’t think of a better pro-capitalism argument for why the humanities still matter. Those who don’t know their history are doomed to have to publicly apologize for it on Twitter.