I wish I'd loved my dog more: Teenage nostalgia, first loves, and pining for the wrong past

I often want to relive the past, knowing what I do now. But the person who should live smarter is me right now 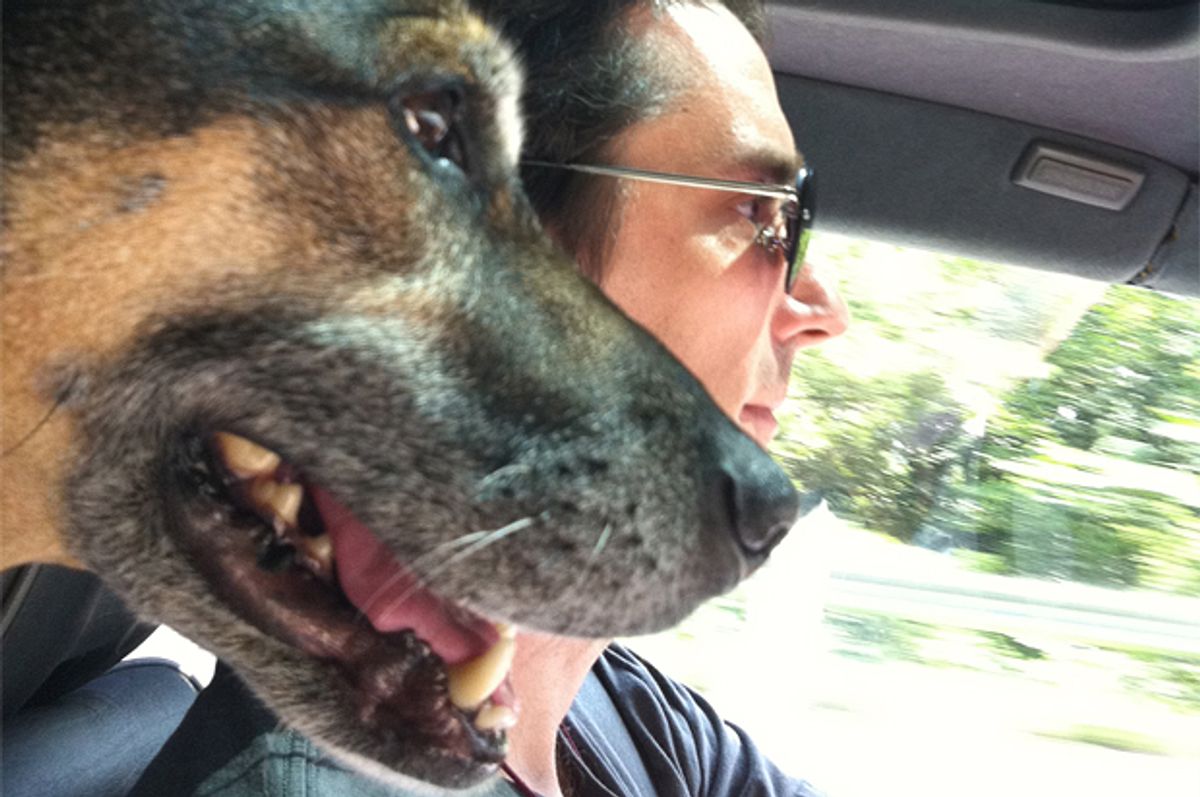 A photo of the author with his dog.
--

I wish I had appreciated it more isn’t the kind of self-criticism that can be reverse-engineered into actionable advice. You would need to walk around appreciating things more. Which is fine and well for unbusy Buddhists, but not for me.

I should practice. Right now the janky jangle of an ice cream truck is drifting in my window and I can also hear my 3-year-old daughter splashing gleefully in a plastic kiddie pool in the backyard. My wife has put our baby boy down for a nap on our bed; he sleeps in the zephyr of an oscillating fan. A week ago, our old dog was given days to live; there is a sarcoma running riot inside the soft brown barrel of her body. But she hangs on, because we’ve started giving her rotisserie chicken for dinner. I’m in a sweltering attic, writing this. Let’s check back in 20 years; will it seem then that I appreciated today enough? This is the sadness at the heart of things – that we left the fresh fruit unfinished; that we did not suck and savor its every fiber, down to the stone, down to the pith.

When I was 19 years old, I spent three months working at a Moravian mission hospital in a town called Ahuas, in the easternmost part of Honduras, a place North Americans may know as the Miskito Coast. There are no roads that will bring you to La Mosquitia; it is accessible only by air and water.

I arrived by air. Immediately, a serious and embarrassing mistake became clear: The doctors of the Clinica Evanglica Morava – there were three – had been expecting a medical resident; what debouched from the single-engine plane was a 19-year-old EMT on a gap year, a teenager who said he wanted to be a doctor when he grew up.

Some of the confusion might be explained by poor communications between Ahuas and the outside world – there was only the hospital’s radiophone and mail that reached the post irregularly. But the more likely cause was my patron in this arrangement, a dashing and dynamic civil engineer who kept homes in multiple Latin American cities. (His passport was thick with extra pages; he drove an open-top Jeep; he knew people everywhere, and everyone he met greeted him heartily. I was in awe.) He had arranged the hospital internship for me as a favor to my father; they were old friends. I suspect that he may have left the matter of my qualifications somewhat vague.

Whatever the cause of the confusion, I had enough sense to be embarrassed by the situation. After a couple of days during which I could see the hospital staff wondering what to do with me, I presented myself to the chief and I offered to go home. I think he was impressed, because after that they did find work for me. I cleaned rooms, I watched children and I assisted the physical therapist, lifting and handling young men who were partially paralyzed as a result of decompression sickness, rubbing oil into their inert limbs. (The only commercial industry in La Mosquitia is diving for lobsters. Most divers receive no training in scuba, and many are injured. The hospital operated one of two hyperbaric chambers in Honduras. That is to say, I operated one of the two hyperbaric chambers in Honduras.)

I listened closely, I took instruction, and so the doctors let me do more. I helped to deliver babies. I was allowed in the operating room, and then I was allowed to assist; to read numbers off the indicated gauge, to pull traction for the obstetric surgeon as he delivered stillborn twins to save the mother’s life. One night I heard a strange and beautiful sound that went on for hours, and only learned in the morning that it was ritual keening for deceased kin. I traveled into the interior with a visiting dental team; we went up a wide brown river, stopping at the sparse and separated villages along its banks. The dentists examined the mouths of hundreds of children every day; I carried their trunks of equipment from the longboat to the shore. At night we slept on the floors of one-room schoolhouses and I heard the grunts and roars of howler monkeys and, once, the growl of a jaguar. I contracted malaria, and hosted an intestinal parasite. On Sundays, I went to the clapboard church and tried to sing hymns in Miskito.

Do these count as memories? Even to me, the one who made them, they have the polished quality of an alibi. They are the stories that I told when I came home, and through repetition, they have become my Official Record of the events, because they show me in a certain light.

But there was a slim journal that I kept at the time – gone now, I think, or not recently seen anyway – that I know would throw light from a different angle. It would remind me that I wanted to leave. I was at the time deeply in love with a girl in Berkeley, California, and I was counting the days until I could be with her. I did a lot of chin-ups to prepare. I didn’t like the food. I seem to have cared a great deal about the clothes I had brought to La Mosquitia. (A pristine Knicks cap ruins the few photos I have of myself in-country, and I insisted on wearing – go on, write it – Tevas, those sandals then de rigueur for hippie preppies. Likely I can blame the intestinal parasite on the Tevas.) And though I believe I was helpful around the hospital, it seems unlikely that I was net helpful. The doctor who decided to let me stay was essentially taking on a liability, a keen but unskilled young man who needed to be fed, housed and kept from death, and who would take more from the place than he would give.

Perhaps I should be kinder to the 19-year-old me – his self-awareness deficits and his sartorial choices. Is there any way around the fact that our brains buzz from the inside, mostly engaged with sending out little worrying parties into the very near future? (Though I’ll say that the pining for that girlfriend need not even be forgiven – she was a great first love and I was lucky to have her to pine for.)

But give me a time machine and – right after I undo some of my more egregious mistakes – I would like to shazam myself back to 1992, to that tiny town on a slow river on the baking coast of a remote land, so that I could take myself by the shoulders, and shake myself, and say: You may think that it keeps going like this, but it does not. This will be the adventure apex of your life; this is the most exotic place you will ever be, will ever have been. Dial every sense up to 10. And take off that stupid hat.

It has cost me a week to write this, and the old dog has died. It was the opposite of sudden – she lived longer than they told me she would; we took her camping one last time. But when she began to bleed we called a vet who came to our home and did the deed here. And so my true friend went slack in my arms, only the second time in my life that I have seen the flame go out. It was a death not only foretold, but decided upon, and ordered in like Thai food. And still it came too soon. I did not give her enough affection in her last years, when she got so lumpy and dandery. Even less once the children came along, though she accepted her demotion with grace and kindness, and would lie close beside my daughter and happily endure the rough grabs and pokes, hoping only for some dropped banana. When the rug incidents became a problem I banished her from the playroom, though I see now that the incontinence was down to the cancer, and anyway she just wanted to lie beside her newest pack mate, the baby boy, who only got to touch her soft ears once or twice. I yelled at her when she ignored my commands, though likely she was deaf; I yanked her lead when she dawdled on walks; I would not let her lick the plates in the dishwasher.

Now I would settle for a chintzier time machine, one that could bring me back six months, a year. Then I could take myself by the shoulders again but this time say: She is an excellent dog. Feed her rotisserie chicken and fling wide the playroom gate and lift her into your bed. She will be gone soon and you will wish you had appreciated her more.

That still misses the point, though, doesn’t it? The me whose shoulders I should be shaking is the right now me. The man-boy from 20 years ago living on the bend of a river in a strange and wild land is an abstraction to me, a character in a story. Maybe this is not a great sadness, or even bad news. The Honduran sojourn formed me, but probably in a manner that will forever elude my understanding – the child is father to the man and all that. No jaguar growls in my life today; I travel by minivan not bush plane; the house is dogless. I walk to the preschool, and I have a baby to bathe.

David Shafer is the author of the novel "Whiskey Tango Foxtrot"