I never should have followed my dreams

I quit my steady gig to fulfill my potential. Instead I went broke, and got fired from a job in doggie daycare 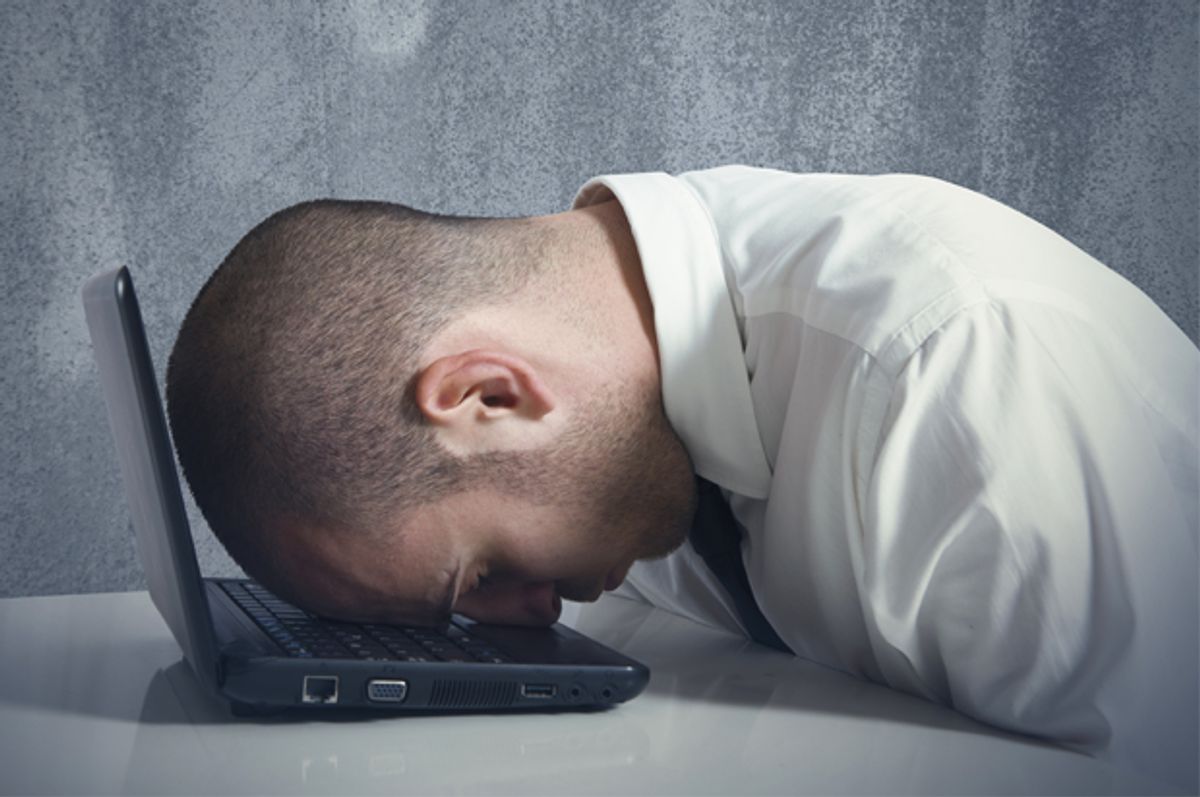 “I quit,” I said, my black leather carrying bag already over my shoulder. I’d imagined this scene for years, a triumphant take-this-job delivery followed by my supervisor’s wounded expression.

I worked for a respected social policy research organization, where Barack Obama had applied for a job before he was president. For seven years I’d sat in a windowless office and formatted reports in Microsoft Word. I sauntered to human resources like a movie inmate on his final walk of freedom through Shawshank prison.

Forty-two and single, I was jumping without a net into the potential person I was meant to be. I’d watched Larry Smith’s famous TED Talk about following one’s passion, and enrolled in an advertising portfolio class. I was determined to rebrand myself as a digital copywriter.

That was the book I bought him for his 70th birthday. It reinforced the stereotype of the Jewish genius by chronicling how a culture of irascibility and entrepreneurship made Israel the most innovative country on earth. It was a drug for my dad. A retired production engineer in New Jersey who’d racked up patents for his inventions, he saw himself as the Ashkenazi Thomas Edison. He mentioned the book whenever I complained about my work.

I was thankful for his support. My position was supposed to be a pause from a lackluster music career, not a destination. I read Suze Orman and tried to make myself indispensable by revitalizing the publishing department’s production process. Proactive, I joined my company’s social media committee, where I sat in meetings for endless months. I updated my LinkedIn profile and résumé with the words “deliverables” and “timelines.” Yet my duties didn’t grow, and recruiters never called. I was stuck in the land of the typing dead.

“This’ll be a new beginning,” my father said. “Time to make things happen.”

Denied unemployment benefits for resigning, I contacted a pro-bono legal organization. They appointed a lawyer who believed I had a strong case for collecting on appeal. I imagined rising like a phoenix from a pyre of word processors.

Then my advertising class ended.

“No one will hire you with a spec portfolio,” a well-known recruiter who’d been recommended to me said. “You’ll have to work for free.”

I was disappointed. I hadn’t expected a welcoming party, just an entry-level spot. I had a friend who wrote junk mail at a department store. How hard could it be?

Changing one’s career in a tight economy, without the proper pedigree of internships and connections, was like trying to audition for a famous pop band in midlife without an instrument.

“Everything will work out,” my father said. “You’ve got what it takes.”

Five months after my grand exit, I won retroactive unemployment benefits but was still jobless. I started to panic and attended résumé workshops, where I agonized over every bullet point. In my dreams at night I begged my boss, who’d put me on probation three times, for my old job back.

Broke and ashamed, I asked my parents for money and tapped my 401K to make my Cobra payments.

I’d believed that resigning at 42 was the acknowledgment of unrealized potential. Now I thought it was the delusional move of a man child who’d missed out on the party.

Nine months in, with my unemployment payments finished, my parents’ assistance exhausted, I responded to an ad on Craigslist for doggie daycare. Afterward I stood behind an Upper East Side apartment building while a pack of canines ran back and forth over an Astroturf yard.

“You can’t let them bark,” the business owner said. She wanted a six-month commitment after a trial period.

I nodded eagerly as the dogs yapped, woofed and defecated. I scooped, threw rubber balls, scolded and cajoled. They howled for my boss as she squeezed through the building’s back door and went inside.

Her jarring text arrived on my cell a minute later.

Between anxiety attacks, I decided to try Starbucks. Its lengthy application process seemed fit for prospective NSA employees. A Starbucks recruiter recommended I approach managers onsite. At the fifth branch, where I was able to get a manager, a young Latino, he looked straight at me — a white, middle-aged guy -- and said, “You want to work here? You look like you should be a doctor.”

Despondent, I visited my parents in Jersey and told them I wanted to jump off a roof. They put me in the car and rushed me to the hospital.

“You were right to leave that job,” my dad said as the nurses escorted me to intake.

I no longer agreed. I stepped outside of the box to access my latent achiever and start a new career. Instead, I emptied my retirement fund and entered the psychiatric ward.

For a week I sat in group therapy sessions with addicts, self-mutilators and suicide attempters. Before I left, the head psychiatrist spoke with me in her office.

“David, I’m not sure you belonged here,” she said.

After a year of being turned away, it was the first statement of rejection that made me smile.

David Sobel, a Manhattan freelancer, is hoping to find work by selling a memoir about unemployment.