Mike Mills: "I discovered Big Star the same way I discovered much of the music I love ­— by listening to Peter Buck's record collection"

As "Radio City" and "#1 Record" get stellar reissues on Tuesday, R.E.M.'s Mills reflects on their lasting genius 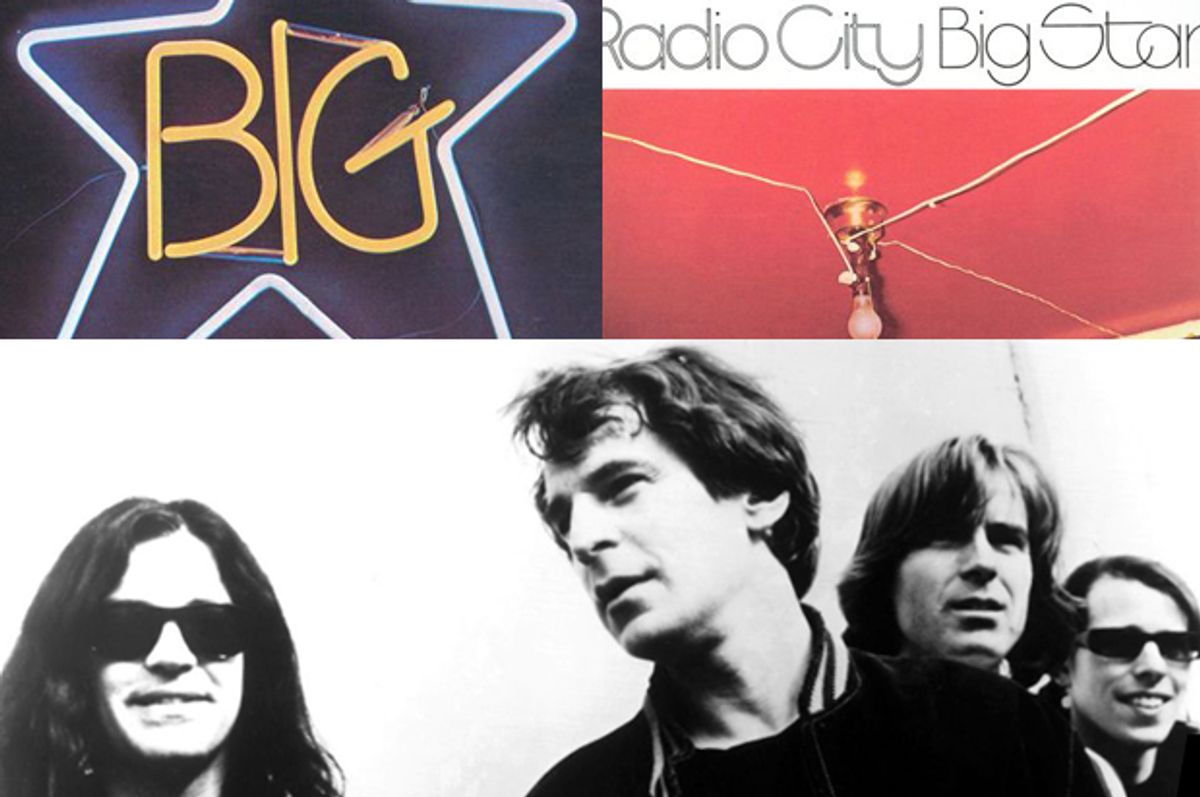 I discovered Big Star the same way I discovered much of the music I love­ — by listening to Peter Buck's record collection. I knew immediately that I had just heard one of my favorite bands, a band who had gotten it right, who made records that sounded like rock 'n' roll bands should sound. A band who wrote all the songs, from flat-out rockers to achingly beautiful ballads that were still somehow rock songs. Songwriting has always been, for me, the most vital gauge of a band’s quality, and these guys were clearly masters.

The sound of these records was also a major part of why they grabbed ahold of me so tightly. Alex Chilton and Chris Bell played guitars that were powerful, but didn't rely on power chords, instead playing melodic, captivating riffs that made their songs complex and gave you something satisfying to listen to, no matter how many times you heard them. The irresistible crunch of these guitars, the fact that they sounded LOUD and full and ballsy, and yet you could hear every string, every note, were a tribute to the band's ears and to the talent of engineer/producer John Fry. And they had one of the all-time powerhouse drummers in Jody Stephens, who left you with no doubt that this was a rock band and that it might be wise to invest in drum heads.

Their production was a revelation, too. I was fortunate enough to listen with Ken Stringfellow and Jon Auer to the master tracks of "Radio City." The level of detail, the imaginative recording techniques that were revealed in the individual tracks, all made the records even more impressive. I heard a pump organ on "Daisy Glaze" that I'd never noticed was there, but that added a warmth and buzz to the song. Jody's drum recording techniques were often so simple, often involving far fewer microphones than were standard at the time, yet they captured exactly the sound required. And the harmonies ... beautiful, but never sappy, complex, but never too busy; they add a dimension to the songs that few bands have ever matched. Today they remain one of the most fun parts of re-creating Big Star's music.

"#1 Record" appealed to me the most in the beginning, although for years I couldn’t figure out why, but the difference between this record and "Radio City" is simple: Chris Bell. His songwriting on "#1 Record" is strong and beautiful, a perfect balance to Alex’s, but it’s Chris’ production, his attention to sonic detail, that makes this record special. He spent hours figuring out how to translate the sounds he imagined into actual noises. How to make instruments do what he wanted them to. How best to utilize a Mellotron, and incorporate it into the songs. The result is a record of rich sonic textures, of declaration and vulnerability.

The lack of commercial success for the band has been well documented, but it is worth noting that it was the catalyst for change in Chris Bell. Having been the driving force behind the formation of Big Star, and pouring his heart and soul into "#1 Record," he could not understand that external forces having nothing to do with music could stop his band from achieving the acclaim they clearly deserved, and indeed had received from all the music press of the day. He soon quit the band, although not before writing or co-writing several of the songs for the next record, including “Back of a Car” and “O My Soul.” Big Star became Alex’s baby, and he responded by making one of the most influential records of all time.

It would seem difficult, if not unlikely, to be able to make another album as good as "#1 Record" after losing a musician of Chris Bell’s caliber, but there was still a lot of talent in this band, and Alex’s vision had only begun to assert itself. On "Radio City," Chilton confirms his place as one of the best songwriters in rock 'n' roll. While "September Gurls" may be the best-known song from this album, every other song here is one that I wish I’d written. "I’m in Love With a Girl" may be the best, simplest love song ever.

Alex died in March of 2010, 32 years after Chris Bell and just a few months before bassist Andy Hummel. I had already planned to go to South by Southwest the next week to hear the band perform with their current lineup, Alex, Jody, Ken Stringfellow and Jon Auer. Shortly after I heard about Alex, I got a call from Jody asking if I would come be a part of what had now become a memorial evening. I, of course, said yes, thus cementing what has been a long and wonderful association with Jody and Big Star’s music. I am fortunate enough to play with what is known as Big Star 3rd, Chris Stamey’s labor of love in which we play all of the "3rd" record, plus generous bits of these first two records. It is an association I treasure, as it allows me and my fellow musicians and fans the opportunity to not only indulge our love of this music, but also to bring it to fans old and new, to do what we can to keep the music, and the memories, alive.

Big Star took me on a trip. From Memphis, Tennessee, we went way out West, all the way to India, hanging out the whole time in the back of a car with Morpha, Daisy and a bunch of September girls. I may not have gotten what I deserved, but I found out what it was worth, and it’s still one of the best trips I’ve ever been on.

Mike Mills was the bassist in R.E.M.