Hawks' galling new outrage: How anything less than bombing ISIS right now has become a "gaffe"

The Obama admin is being dubbed incompetent for ... needing a little while longer to put together a war plan? 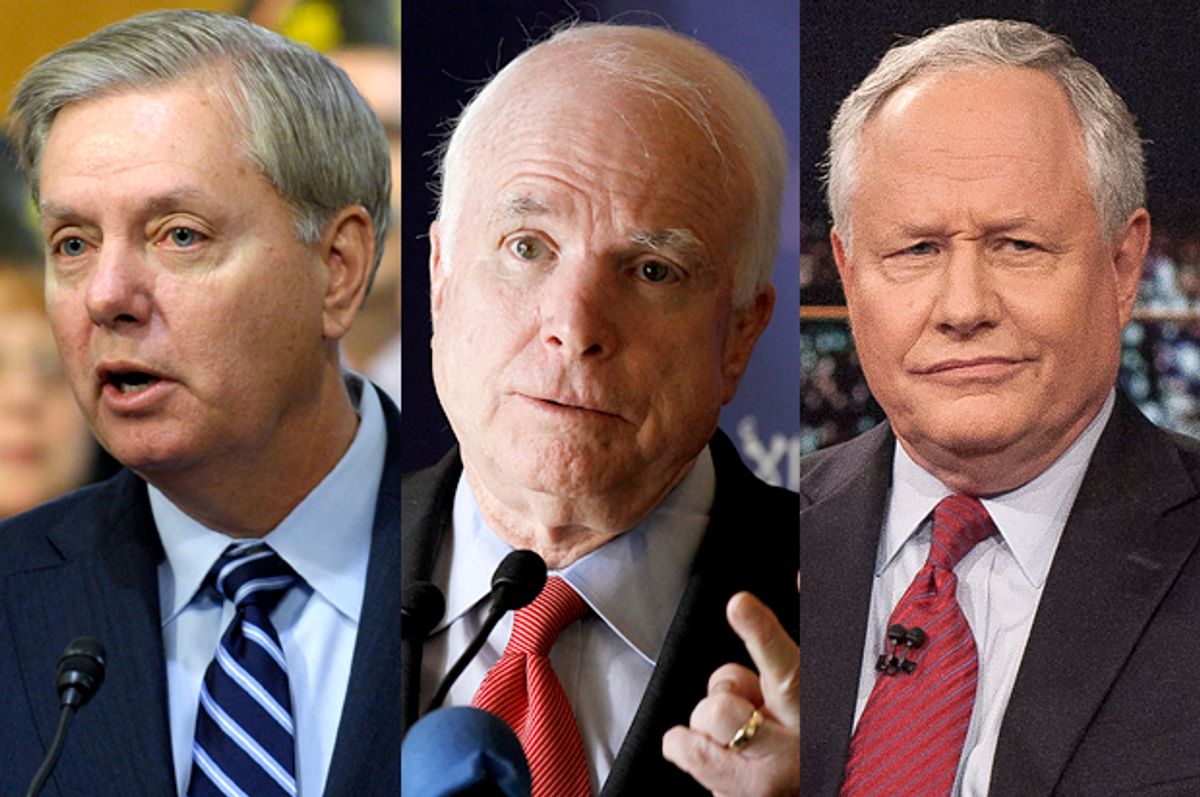 The brouhaha over President Obama's "we don't have a strategy yet" has got to be among the more embarrassing collective faintings from the political media in some time. It is being dubbed the gaffe to end all gaffes and the words that will be engraved on Obama's gravestone. There's ISIS out there in the Middle East, just killing everyone all willy-nilly, and the president has no strategy, because he plays golf and is weak. The Optics are bad, and so that justifies everything. Now audio of the president saying "we have no strategy" can be cut-and-pasted into any old Republican ad across the country, overlaid over any visual: footage of chaos in the Middle East, unemployment lines, domestic strife, whatever.

What did Obama say? In what context were these remarks made?

"I don't want to put the cart before the horse," Obama told reporters during a White House news briefing. "We don't have a strategy yet."

Obama said he's asked America's top defense officials to prepare "a range of options" about what the United States could do to go after ISIS in Syria, which he described as "a safe haven" for the Sunni extremist group that calls itself the Islamic State.

The President's remarks follow days of speculation about whether the United States had a plan to go after ISIS in Syria.

"We need to make sure that we've got clear plans, that we're developing them. At that point, I will consult with Congress and make sure that their voices are heard," Obama said. "But there's no point in me asking for action on the part of Congress before I know exactly what it is that is going to be required for us to get the job done."

So he said that he's asked the Defense Department to come up with options for attacking ISIS in Syria. The Defense Department is working on those. (As the fact that we're flying surveillance planes over Syria now indicates.) Once they've put together those options, Obama will consult with congressional leaders and perhaps seek authorization from Congress. What was "we don't have a strategy yet"? Basically Obama saying that his administration needs another week or two to figure out how much bombing it wants to do in Syria. GAFFE. Who elected these bozos? Other bozos, probably.

Obama's remarks, in context, are still alarming -- but hawks aren't the ones who should be alarmed. Those who are concerned about the United States jumping headlong into the Syrian civil war are the ones who should be. President Obama is building a case for intervening in Syria, along with the intervention that's already begun in Iraq. Hawks appear to be getting their way: The president is putting together a plan to launch a coordinated military offensive in two Middle Eastern countries. Whether you feel that's the right call, it all seems to be happening rather quickly. Voicing complaints about whether the U.S. should be considering going to battle with ISIS at all has suddenly become gauche, fringey. The public debate now is between those who think a massive assault on ISIS in Syria and Iraq should happen this minute or if it's acceptable for President Obama to have another week or two to draw up his plans.

It nauseates and angers everyone to see not one, but two beheadings of American journalists. But that rage and frustration doesn't make the prospect of eliminating an "army" spread across two countries any smaller of an undertaking. Such a move still requires "planning" and "debate" -- within the administration, in Congress, among everyone. It takes approximately four seconds to go on Twitter and share your opinion that the U.S. military should BLOW ISIS TO SMITHEREENS RIGHT AWAY. It takes a little bit longer to (responsibly) game out such a strategy.

This impatience to smash everyone in ISIS right away with an awesome, star-spangled display of the latest advanced weaponry is producing criticism that, in most worlds, would be laughable. Yesterday State Department spokesperson Jen Psaki referred to Sotloff's beheading as a "horrific terrorist act." But she was criticized, mostly on the right, for refusing to describe it as an "act of war." Yet another GAFFE.

Personally, I'm thankful that Psaki dodged the question this way, because calling it an "act of war" would have been a remarkably improper declaration of government policy from a spokesperson. If you call it an "act of war" then you commit the Defense department to a specific posture: war. And for right now, our government is still deciding whether it wants to thrust itself into a war with Syria and Iraq. The people who decide such things should take as much time as they need. It's a big decision. Everyone gets that it's a big decision, right?