In New York, Mayor Bill de Blasio is creating an entire new school grade. Here's what's at stake for all of America 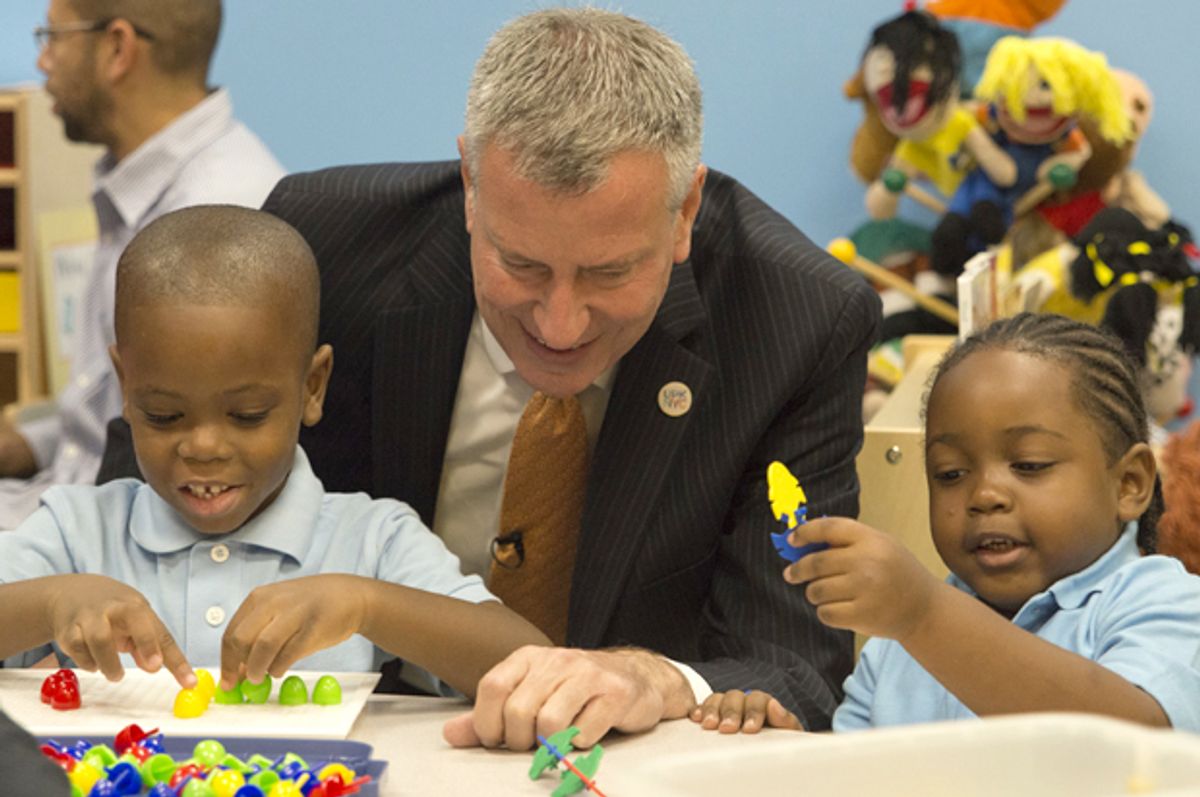 Defying the expectations of naysayers, today 53,000 4-year-olds will show up for the first day of school under New York City’s new, universal pre-kindergarten program. It’s progressive Mayor Bill de Blasio’s signature policy initiative, and observers are already staking his legacy on it.

You can bet on one thing: There are going to be plenty of screw-ups. On Tuesday— two days before schools were set to open their doors — the de Blasio administration shut down nine of its pre-K centers because of safety concerns or other issues, sending parents scrambling to enroll their kids at other sites. Another 36 centers won’t be ready in time and will have to open late.

The snags are no surprise if you consider the enormousness of the undertaking and the mayor’s timetable for implementing the new program. In a mere five months — the city only secured the $300 million it needed to finance the initiative this spring — the de Blasio administration has rushed to add 30,000 pre-K slots to the city’s existing 20,000, and is preparing to add another 20,000 before next fall. The city has struggled to find enough space to accommodate the influx of kids; in addition to using around 600 existing public-school sites, it is also using space from around 1,100 nonprofit and community organizations. It’s had to hire 1,000 teachers in the last few months, and plans to hire 1,000 more by 2015.

More troubling, last week New York City Comptroller Scott Stringer issued a press release assailing the mayor for failing to hand over hundreds of contracts for pre-K service-providers, which the comptroller’s office is charged with vetting. Stressing the importance of the review process, the document mentioned uncovering one vendor with an employee who was charged with conspiracy to commit child pornography, and another that had failed to screen its personnel with the state’s Register of Child Abuse and Mistreatment. The mayor’s office has since provided proof that it addressed these problems.

For de Blasio’s critics and the few government-hating conservatives trapped in this island of blue, each misstep will only confirm the conviction that the whole thing was a terrible idea. Rob Montz at libertarian Reason magazine didn’t even wait for kids to start showing up before declaring it a failure; in a syllogism that could only have come from way out in Ayn Rand land, he argues that the city shouldn’t bother expanding its educational efforts because a quarter of New York City students score below grade level in math or reading.

But setbacks like those that plagued the rollout of Obamacare — and those that will surely bedevil de Blasio’s bold pre-K initiative — are just the price liberals pay for trying to tackle large-scale social problems. It’s one of the ways being a progressive is a lot harder than being a conservative. If you’re a conservative, you see it as your job to make sure the institutions you’re elected to lead do as little as possible, or actively try to sabotage them from working. You get to sit back in your La-Z-Boy and cackle at government efforts to combat poverty, inequality, or education

But those of us who think the government should try to improve life for all of us are burdened with having to make big ideas a reality. As anyone who has ever managed a project knows, problems inevitably arise when you’re trying something new. That’s especially true if you’re working on something big — there are simply more opportunities for problems to arise. Whereas conservatives take this as a sign to give up — or rather, not to have bothered in the first place — liberals must go about ironing out the kinks.

The research on pre-kindergarten education is compelling. Kids who attend pre-K enter the next grade more prepared than those who don’t. They score better on reading and math. The extra year of schooling narrows the performance gap between minority and non-minority children. In the long term, kids who’ve attended pre-K have higher high-school graduation rates, are less likely to be arrested for violent crimes, suffer less unemployment and get paid more. Pre-K education benefits poor parents especially, who are freed up to work rather than having to pay the estimated $13,000 per year it costs to put a kid in daycare. In the end, investment in early-childhood education pays for itself by reducing delinquency and boosting employment.

As de Blasio’s pre-K initiative gets off the ground, there will invariably be a horror story or two. But for every anecdote about a hastily hired teacher or an unsafe classroom, there will be hundreds of kids who will have a better shot at succeeding because of the program. Implementing universal pre-K for the city’s kids will come with its share of headaches, but this is how you govern.