From Elizabeth Warren to Sarah Palin: Here's which women decide to run for office

It's not an ambition gap that's keeping women out of politics. It's something structural -- and far more insidious 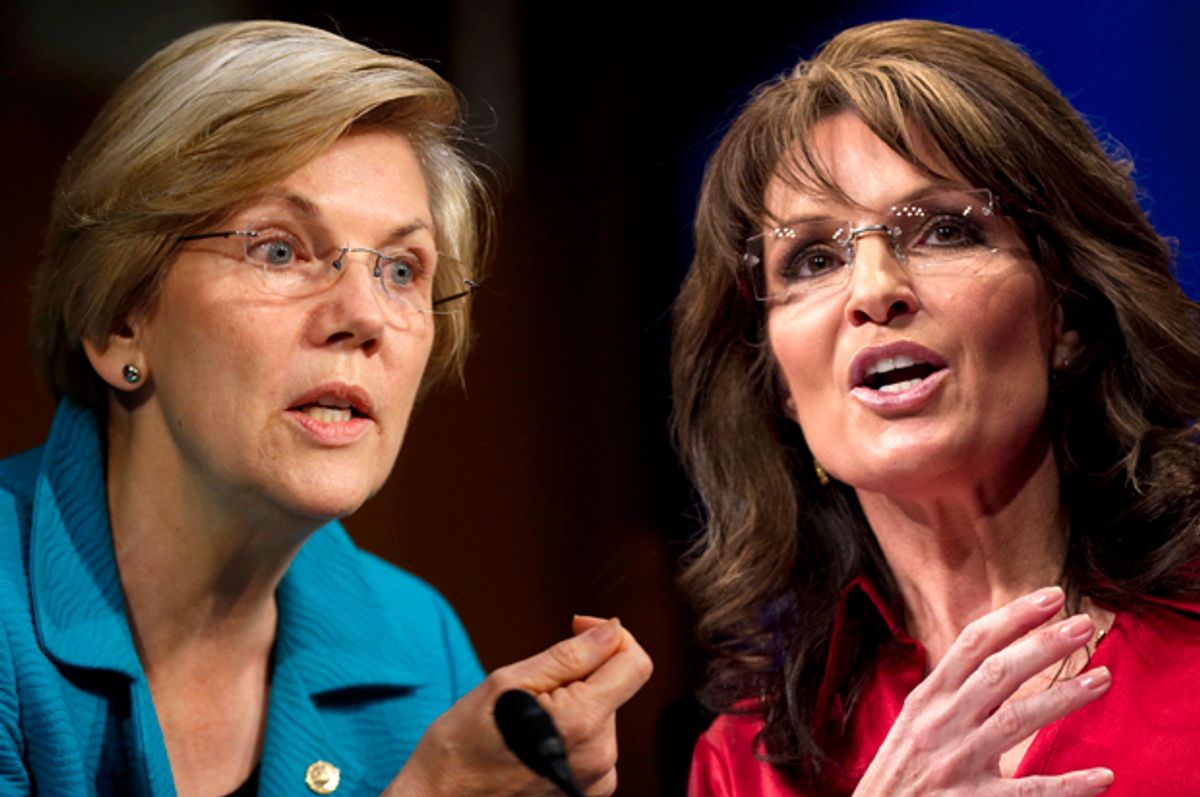 Women make up 50 percent of the population, but only account for 25 percent of candidates running for political office. These were the numbers released last week by the Pew Research Center, and they are the same numbers we know from similar research on the dearth of women running for and holding down seats at the local, state and federal level. And while the hard data is nice to have, it rarely reveals some previously unknown truth about why things are the way they are when it comes to women in politics.

But this is the big question, of course. Why don't more women run? We know that when they do, they tend to raise as much if not more money than their male peers. We also know that they do well where it counts: winning. "At this point, when Democratic women run, they tend to win," Jess McIntosh, communications director for EMILY's List -- an organization that supports pro-choice women candidates -- recently told National Journal writer Lucia Graves.

And yet there's this really, really big gap between how the country looks and how, say, the Senate looks.

The Sheryl Sandberg school of feminist transformation leans hard on the idea of confidence and self-empowerment when it comes to answering these questions. Women don't believe themselves capable or worthy or whatever marker of value we're focusing on and so they don't put themselves out there, whether it's for a raise at that generic office job, a spot on the school board or a chance at the governor's office. And this is no doubt true, to an extent. As Graves noted after attending an EMILY's List training session, women interested in political office often point to balancing the needs of their families or a feeling that their husbands are "more knowledgeable" as reasons why they ultimately don't run.

But research on the gender gap in politics tells a more complicated story. Like most things having to do with enduring sexism and barriers to women's entrance into old boys club institutions, the answers are actually more structural and insidiously cultural than personal. Rectifying the lack of women in politics, then, may take some combination of campaign finance reform and Ann Friedman's and Aminatou Sow's Shine Theory.

"The barriers are not as obvious as you might think," Heidi Hartmann, the president and CEO of the Institute for Women's Policy Research, told Salon. "You see in the news the way women candidates are treated. People talk about their appearance. These women are criticized if they are working mothers, and criticized if they are single.

"Those issues are important when women consider running, but it's primarily dollars and cents that keep women from moving up in politics," she said. "Is the political structure welcoming? Is the party putting them forward?"

It's not an ambition gap, it's a series of institutional blind spots maintaining the status quo. Hartmann said that the women she interviewed for a recent study on the issue were plenty confident about their abilities. Instead, what these women lacked was access. If politics really is a game of who you know, it's a game that women are losing right now, through no real fault of their own.

"Sometimes it's a matter of introductions to very influential party people who don't actually hold any party office," Hartmann explained. "These are donors, very often big donors. People who can organize foot soldiers. The feeling is that in many of these areas, it is still the old boys network -- largely the old white boys network. And they are much more likely to promote and push forward people who look like themselves."

This is where, say, campaign finance reform comes in. If the established donor networks tend to favor male candidates, then taking the big money out of politics could go a long way toward leveling the field for new or aspiring candidates. On this point, it's worth noting that five of six states with public financing are beating the national average when it comes to representation of women in state legislatures.

So changing that is a start. And then there's Shine Theory.

"Powerful women have long held the belief, if only at a subconscious level, that there are a limited number of spaces for them at the top," Friedman wrote in a piece explaining the idea for New York magazine. "Have you ever seen a campaign ticket or a boardroom that’s more than 50 percent female? There’s a deep-seated belief that there can be only one -- or two, or three at max."

Friedman and Sow are in media and tech, but "I don't shine if you don't shine" applies just as well across fields. In addition to the work of leveling institutional barriers, lifting up other women is key. "And it's not just a matter of recruiting women who maybe never thought of running," Hartmann said of female networks. "It's working with the ones who are already in office to help them move up. Most of the women we interviewed talked about a desire for a cross-level mentoring system."

But Shine Theory applied to women in politics means more than just mentors -- it's building powerful networks of powerful women who can do powerful things. Some of the women Hartmann interviewed recalled meeting a woman running for office or already holding one down and feeling inspired to get into politics. But women need more than just inspirational classroom visits or mentors, they need people to introduce them to the "political makers" -- the people who "make" the candidates because they connect them to the money, Hartmann explained. It's about countering the boys club with, well, a girls club.

There's clearly no easy answers when it comes to achieving gender parity. The dismal numbers are the product of entrenched and insidious factors. Weigh the enduring sexism and racism that characterizes who we think can lead, the wealth gap between men and women, the sexual and violent harassment women face in the public sphere and you've got yourself a really potent cocktail for maintaining the status quo.

And, of course, there's no guarantee that more women in office means better politics. (Hello, Jodi Laubenberg, Renee Ellmers, Cathy McMorris Rodgers, et al. You are very terrible.) But removing financial barriers to entrance and shaking up the old boys networks that may keep women out will certainly change how our politics look. And, eventually, may very well change how they work, too.