7 right-wing Christians who got their comeuppance in hilarious ways

The arc of justice is long, and sometimes it has a wickedly ironic sense of humor 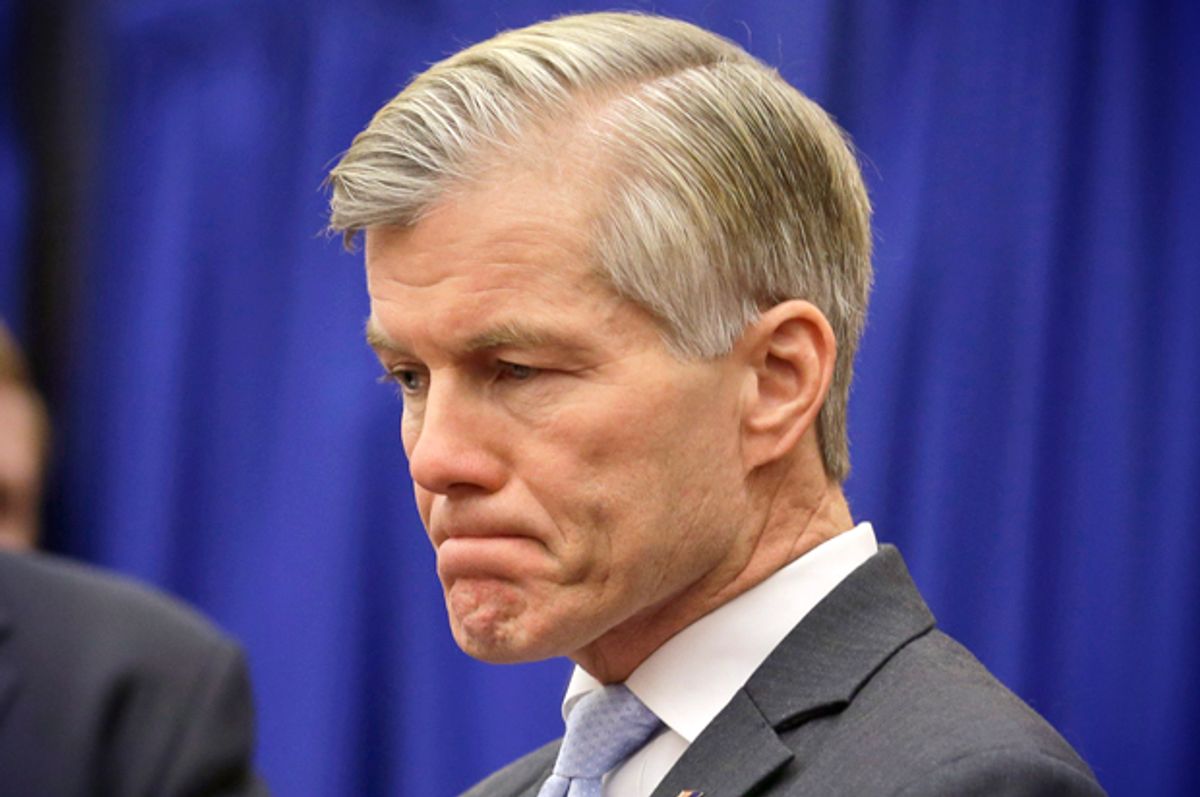 The arc of justice is long, and sometimes it has a wickedly ironic sense of humor. In the case of these seven religious, right-wing pastors, preachers, lawmakers, and lobbyists, the more sanctimonious they are about everybody else’s marriage and sex habits, the more likely they are to wind up disgraced over their own.

Jonathan Saenz is best known as the leader of Texas Values, an anti-LGBT advocacy organization in the Lone Star State. In 2011 Saenz was conscripted to head the group when it split from its parent organization, where Saenz was a lobbyist. He quickly mounted campaigns opposing gay marriage and anti-discrimination ordinances and spread invective about gays and lesbians wanting to send Christians to internment camps.

But it appears his rampant homophobia springs less from pious ideology than from petty personal grievance. In fact, his homophobia seemed to have been contracted right around the time his wifesued him for divorce while dating another woman.

Saenz didn’t take news of his wife’s new girlfriend well. He moved to ban her from being around the couple’s children, and attempted to force his wife to undergo expensive psychiatric evaluation—a process he tried to get out of paying for. Saenz countersuit, alleging his wife’s fault in the divorce for adultery, went nowhere. Now he’s stuck exacting his revenge by trying to keep others from marrying.

A few years ago, then-Virginia Governor Bob McDonnell and his version of “family values” conservatism seemed destined for the GOP presidential nomination.

What a difference one corruption trial makes. The McDonnells exited the Virginia Governor’s Mansion accused of having used it for their own enrichment and that of their cronies.

During the recent trial the McDonnells’ marriage was revealed to be a sham. The defense—as in, the McDonnells!—argued that the union had dissolved during McDonnell’s tenure, to the point that Maureen McDonnell had an unrequited crush on the businessman with whom McDonnell was supposedly exchanging favors for lavish gifts.

It gets worse for the formerly smug governor. With his marriage on the rocks, McDonnell has been living with Wayne Ball, a Catholic priest. The impossibly-named Father Ball was caught in 2010 having sex with a man in a parking lot, a charge to which he eventually pled guilty. This is McDonnell’s new roomie.

Meanwhile, McDonnell’s version of conservatism suffered a statewide defeat at the polls last fall, with uber-Christian conservative Ken Cuccinelli, once a shoo-in to succeed McDonnell, going down to Terry McAuliffe. McDonnell’s spot in Father Ball’s pad is now all that remains of his once-ascendant family values empire.

McDonnell’s not the only religious right conservative politician who’s in free fall. Representative Vance McAllister, a strident Christian lawmaker from Louisiana, set the land-speed record for earning the label “disgraced” when security footage revealed him locking lips with a staffer who’s not his wife.

McAllister can’t make up his mind as to whether his complete and abject hypocrisy means he should give up his congressional seat. In the meantime, he’s sought counsel from another controversial proselytizer: Duck Dynasty’s Willie Robertson. McAllister wanted nothing more than to be seen with Robertson back when the reality TV star was the right’s cause célèbre, evengetting into a tussle with Senator Jim Inhofe over who got to take Robertson to the State of the Union.

But since then Duck Dynasty’s ratings have tanked. And it doesn’t appear that McAllister’s star-struck desire to be seen with Robertson is requited: when asked about the lawmaker’s dalliance, Robertson had “no comment at this time.” For a further twist of the knife, one of the DuckDynasty’s kin is challenging McAllister for his seat. You’d think a ticket to the State of the Union would buy a little more backup than that.

Jonathan Saenz’s religious right fervor was metastasized by his divorce, but usually it happens the other way around, as epitomized by Atlanta-area preacher Eddie Long.

Long’s led the New Birth Missionary Baptist Church since 1987. He has been named by the Southern Poverty Law Center as “one of the most virulently homophobic black leaders in the religiously based anti-gay movement,” at one point sneering that “if you are gay you deservedeath.” To cap it off, in 2004 Long and Martin Luther King, Jr.’s daughter led a March through Atlanta against same-sex marriage, calling for a constitutional amendment to federally prohibit the practice.

His sanctimonious stance on marriage and homosexuality would come back to haunt him. In 2010 Long was accused of seducing four male members of New Birth’s youth missionary, allegedly courting them when they were as young as sixteen. The case was settled quietly, for a rumored $2.5 million.

The kicker: Long kept his congregation, leaving the true casualty his marriage: Long’s wife filed for divorce following the allegations. Like Saenz, Long continues the pretense that he can tell others how marriage is supposed to work even as his rank hypocrisy sacrificed his own.

California State Senator Roy Ashburn left a long trail of anti-LGBT votes behind him in the state house, opposing everything from the establishment of Harvey Milk Day to same-sex marriage. In fact, the Republican lawmaker was perfectly anti-LGBT, earning a round zero rating from Equality California for "for voting against every gay measure that has come before him in office.”

And he might still be casting those votes had he taken a cab home one fateful night in 2010. Ashburn was pulled over in Sacramento and booked for a DUI, normally not a career killer in politics—until it was revealed that he was stopped on the way home from a gay night club with another man in the passenger seat. He probably didn’t use his zero rating from Equality California as a pickup line.

It seemed the legislator doth protested too much. Ashburn came out as gay in a radio interview a short time later, claiming that his unbroken string of anti-LGBT votes were merely fulfilling the will of his constituents.

Now Driscoll himself is the oddity. Driscoll’s infamy, masturbation-based and otherwise, has ballooned in the past couple years. He has battled plagiarism charges. And copped to using a PR firm to buy enough copies of his book to place him on the New York Times bestseller list (for exactly one week). His church is experiencing layoffs. And Ex-Mars Hill Church members have written about bizarre “demon trials” Driscoll performed on those who complained of depression.

How can he save face from this slew of bad press? Apparently by keeping his members from reading anything about it. "Love Jesus,” Driscoll said in a recent sermon, “read your Bible, stay off the Internet. It’s all shenanigans anyways.”

At least plagiarism charges and schemes to become a bestseller have some ambition to them. The lowest end of this list has to go to Grace Fellowship Church pastor Jerry Pittman of Jackson, Tennessee.

Pittman was already in legal trouble for accusations that he plotted a vicious and violent assaulton his son and his son’s boyfriend as they tried to attend his services one day. “My uncle and two other deacons came over to the car per my dad’s request,” Jerry Pittman, Jr. said. “My uncle smashed me in the door as the other deacon knocked my boyfriend back so he couldn’t help me, punching him in his face and his chest. The other deacon came and hit me through my car window in my back.” The young man added that as they were beaten and mocked with homophobic epithets, none of the bystanders offered to help.

But it was something else entirely that finally got Pittman into court, when he was arrested forstealing copper wire from his wife. In another shining example of conservative marriage, Pittman and his wife were separated at the time, but that didn’t stop him from scavenging thousands of dollars worth of copper from her scrap yard.

It’s the ultimate symbol of the fall of these seven: so lofty about others’ behavior only to be caught in the pettiest of their own sins.