Sincere calls for a congressional debate won't matter. If a president wants war, a debate is mere political theater 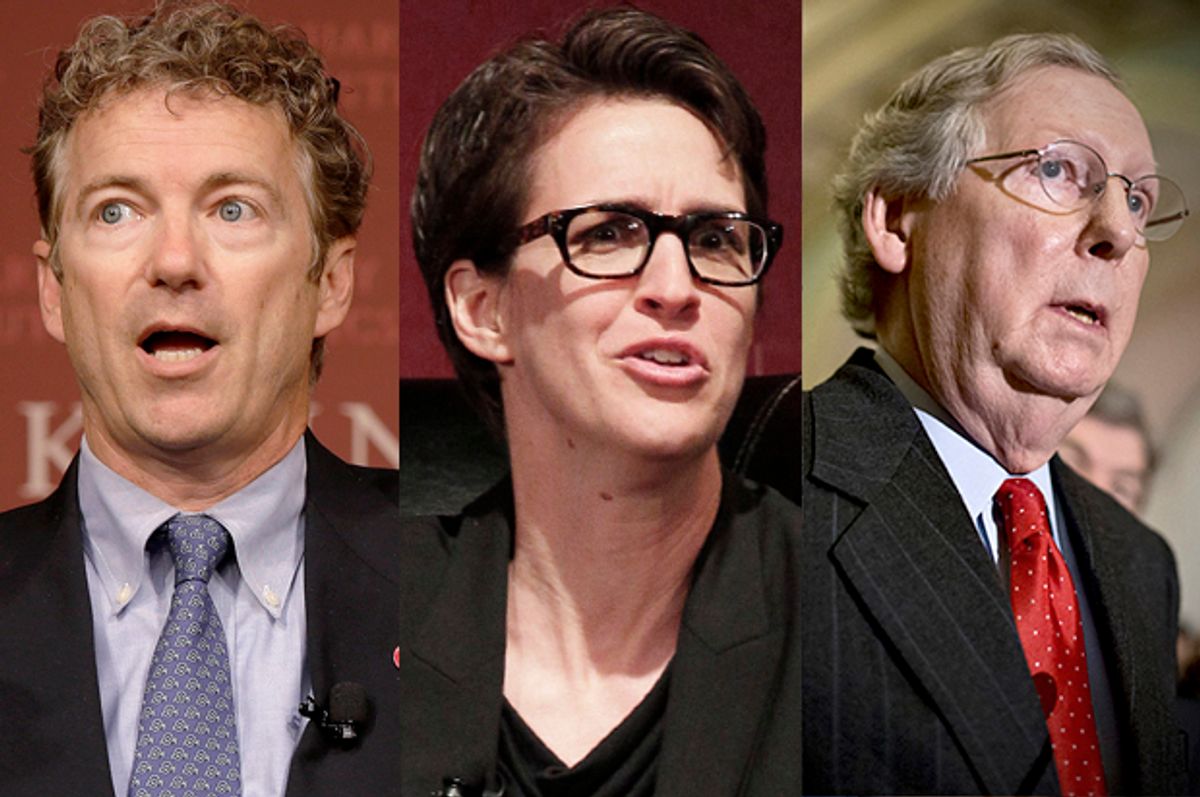 If there's one thing everyone can agree upon when the powers-that-be want to do something potentially disastrous, it's that there should be a "robust debate" in Congress, particularly when it comes to matters of war. That doesn't mean that sincere people don't want a meaningful debate that would tip the scales.  It's just that we don't ever have them.

Commenters from the left, such as Rachel Maddow, are begging for members of Congress to take the lead and vote on whether or not the country should escalate its presence in the Middle East to fight the terrorist group ISIS (among other things) while leaders on the right such as Mitch McConnell are suggesting the president must come to the Congress for approval (which he guarantees the president will get, by the way). Even the leading libertarian Sen. Rand Paul is saying the most important thing right now is for the Congress to ... debate.  (He is suddenly unwilling to discuss whether he is personally for this proposed military action for some reason.)

In fact the founders debated all this before they put in the Constitution that the Congress should have the power to declare war. It went like this:

Mr. PINKNEY opposed the vesting this power in the Legislature. Its proceedings were too slow. It wd. meet but once a year. The Hs. of Reps. would be too numerous for such deliberations. The Senate would be the best depositary, being more acquainted with foreign affairs, and most capable of proper resolutions. If the States are equally represented in Senate, so as to give no advantage to large States, the power will notwithstanding be safe, as the small have their all at stake in such cases as well as the large States. It would be singular for one authority to make war, and another peace.

Mr. BUTLER. The objections agst. the Legislature lie in great degree agst. the Senate. He was for vesting the power in the President, who will have all the requisite qualities, and will not make war but when the Nation will support it. Mr. MADISON and Mr. GERRY moved to insert "declare," striking out "make" war; leaving to the Executive the power to repel sudden attacks.

Mr. SHARMAN thought it stood very well. The Executive shd. be able to repel and not to commence war. "Make" better than "declare" the latter narrowing the power too much.

Mr. GERRY never expected to hear in a republic a motion to empower the Executive alone to declare war.

Mr. ELSWORTH. there is a material difference between the cases of making war and making peace. It shd. be more easy to get out of war, than into it. War also is a simple and overt declaration. peace attended with intricate &amp; secret negociations.

Mr. MASON was agst. giving the power of war to the Executive, because not safely to be trusted with it; or to the Senate, because not so constructed as to be entitled to it. He was for clogging rather than facilitating war; but for facilitating peace. He preferred "declare" to "make."

On the motion to insert "declare"-in place of "make", it was agreed to.

The debate about war powers has been with us since the beginning and hasn't changed much since then. There have been five official declarations of war: the War of 1812, the Mexican-American War, the Spanish-American War, World War I and World War II.  Needless to say, those are hardly the only wars America has fought, which means that the president has used his authority under that power to "repel sudden attacks" many times. President Obama forcefully asserted his authority to unilaterally order military action against ISIS just yesterday.

However, while the executive almost always reserves his war-making prerogatives, he will also welcome a congressional resolution endorsing his decision. And in his speech the president explicitly asked Congress to provide more money to implement his decision, a vote that could stand as proxy for congressional approval. War is a risky endeavor and even a commander-in-chief would like to be able to point to his fellow officials as comrades in bad decision-making should things go awry.

And so we find ourselves at another of those moments, where people from all sides are clamoring for that "robust debate" about whether and how the U.S. should deploy its mighty military power in the Middle east. As this usually unfolds, the president, in his role as leader of the armed forces, takes the first step and lays out a plan, asserting his constitutional authority to do exactly what he wants to do. Now it remains for everyone else to decide if they agree with him. So what we're talking about is really political calculation, which, again, everyone believes should be debated. Robustly.

But nonetheless after this robust debate, Congress is going to vote for war in one way or the other. Even in times of great skepticism about the use of military power, or what seems to be a consensus in one party or another, the end result is the same. If the president wants to go to war (particularly if the people agree, which this week's polling suggests they do), the Congress is the last institution that will balk.

One might think that the debacle of the Iraq War vote in 2003 would be an object lesson to these politicians, particularly to anyone who is thinking of running for national office, but I suspect that isn't going to be the case.  The calculation at the time, among the many potential Democratic presidential candidates, was that it would be folly to oppose it. And the reason for that is because of the "robust debate" over the first Gulf War under President Bush Senior, which the New York Times described this way:

Just before the Senate voted, Senator Bob Dole, the minority leader, said the time to authorize the use of force had come. "Let's not pull the rug out from under the President when the pressure is building on Saddam Hussein by the minute," he said. "Let's don't give him any relief."

Their comments were just two examples of a remarkably full, thoughtful debate by more than 268 Representatives and 93 Senators, many of whom waited until the early hours this morning for a chance to go on the record. And today, both chambers usually had majorities of the members sitting and listening as the final arguments were offered.

Today's action was the first time since Aug. 7, 1964, when the Gulf of Tonkin Resolution was adopted, that Congress had voted directly for offensive military action. But today's votes were far closer than the 88-2 Senate margin or the 414-0 result in the House for the Gulf of Tonkin Resolution, which was cited for years afterward by foes and supporters of the war effort as Congress's critical move.

The last time Congress was comparably divided in deciding to go to war was with its votes to launch the War of 1812; the House voted 79 to 49 in favor and the Senate followed, 19 to 13.

That war was, as you surely recall, considered a rousing success. There were no "boots on the ground," American technology was celebrated the world over, CNN was born and President Bush was seen as a shoo-in for reelection. And any Democrat who voted against it was automatically disqualified from running for the presidency in 1992. That's ironic, of course, since Bush himself was defeated --- but he was defeated by a man who was not in federal office at the time but said he "probably would have voted for it."

To be sure, Barack Obama won in 2008 largely on the basis of his stated opposition to the Iraq invasion. And perhaps one might expect the Democrats planning to run for president to see his prescient opposition as the proper model. If there were any Democrats planning to run for president aside from Hillary Clinton (and she hadn't been an important member of the subsequent Obama administration who is still positioned to his right), it would be a fascinating dynamic to watch.  Alas, the Democrats are almost sure to fall in line with their president, perhaps in slightly smaller numbers than the Republicans fell in line with theirs in 2003. (The GOP hawk faction is substantially larger than the Democrats',  although there are plenty in both parties.)

So today, with a Democratic president making the decision, the roles may be reversed, with Republicans making a show of being unsure and the Democrats putting themselves solidly in line behind the president. Those political calculations will be interesting to watch as they may clarify whether there is any real appetite for a more isolationist GOP and how many on the Democratic side may be willing to defy a president of their their own party. (There's even some thought among GOP House members that they might not have the robust debate at all, in order that they can take the winning side after the fact. Yes, they are that cynical.)

But the fact remains that if the Senate decides to debate the president's strategy, as it very likely will, or if they pass his request for funding as they certainly will, there is zero chance that they will refuse to back his policy. And that's because these "authorizations" are about politics not policy. They never fail. If the president decides he wants to go to war, he is going to do it. And whether or not that's right is a question that goes all the way back to the constitutional convention.

Maybe it's time we decided one way or the other -- instead of staging "robust debates" that are only useful for political rivals to hit each over the head with after the fact.