The company's history of safety violations contradiction its commitment to public health, the NRDC claims 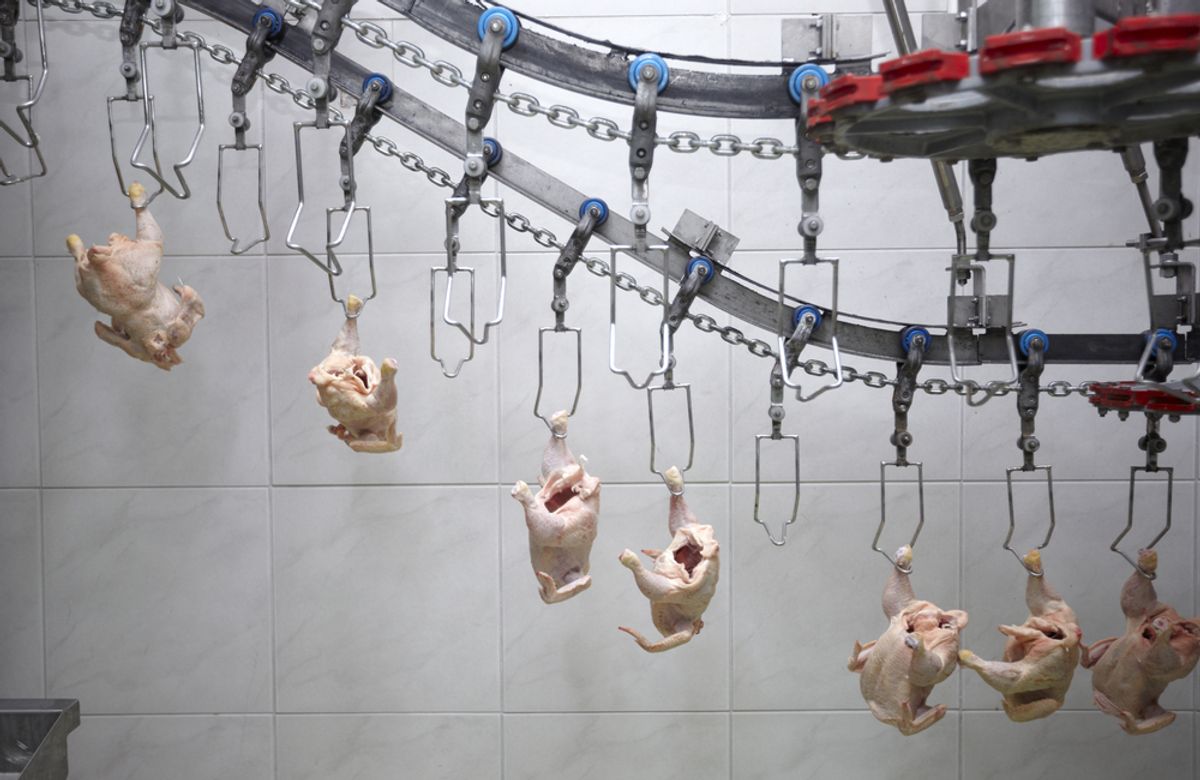 After a 17-month long Salmonella outbreak linked to at least 634 illnesses, Foster Farms officially stopped poisoning people with its chicken this July. The company insists it's since cleaned up its act, lowering its Salmonella rate to just five percent of chickens tested (way below the industry average of 25 percent). It's newfound commitment to safety has been so successful that, NPR recently reported, "some food safety experts are now saying the whole poultry industry should follow this company's example."

But new documents reveal that the company had a lot more to overcome than it's let on. The Natural Resources Defense Council just released hundreds of pages of USDA documents, obtained through a FOIA request, that expose some pretty nasty -- and widespread -- health and safety violations at the company's processing plants, more than 200 of which occurred at two California plants directly linked to the outbreak. Those violations include, per the NRDC, "descriptions of mold growth, cockroaches, an instance of pooling caused by a skin-clogged floor drain, fecal matter and 'Unidentified Foreign Material' (which has its own acronym, UFM) on chicken carcasses, failure to implement required tests and sampling, metal pieces found in carcasses and many more." According to the group, the reports point to a pattern of noncompliance in Foster Farms' facilities, and in those plants specifically, that belie the company's professed commitment to food safety.

“We would have expected that improved sanitation would be a top priority at Foster Farms at the height of the Salmonella outbreak," the NRDC said in a statement, "yet its slaughter and processing plant in Livingston, CA, was cited 154 times in the weeks and months after October 7, 2013, when USDA issued a public health alert about Foster Farms chicken. We tally more than one violation every two days at the plant, on average, between October 2013 and March of this year."

The documents span from September 2013 to March of this year, before the outbreak ended. As such, Foster Farms responded in a statement, they don't reflect the plants' current performance.  “Foster Farms has made extensive progress over the last year, and especially over the last four months, as a result of our multi-hurdle approach to Salmonella control and our updated facility operations," it added. The company also stressed that non-compliance violations of the type detailed here are fully resolved before prior to production. But the documents show that the company's past public statements about its commitment to safety were at odds with what was actually going on at its plants -- and that, said Jonathan Kaplan, who directs the NRDC's Food and Agriculture program, makes it hard to trust what they're saying now.

What the NRDC's really concerned about, though, isn't so much the feces (although those are an important health concern) as it is Foster Farms' lack of transparency about its use of antibiotics, particularly as the outbreak concerned a drug-resistant strain of Salmonella. While Perdue, last week, announced that it had taken a major step toward eliminating the use of the drugs in its poultry in order to help curb antibiotic resistance, Foster Farms has yet to make the same commitments. The company says that it doesn't use antibiotics for growth promotion or any that are "considered critical to human medicine," but hasn't been clear on the specifics -- for example, about whether it follows the practice, common in the industry, of using the drugs prophylactically.

For a company to boast of industry-leading standards without addressing that key safety issue, Kaplan told Salon, doesn't make much sense. “My position is that Foster Farms, having sickened a lot of people and spread antibiotic resistant bacteria all over the country, now really has an obligation to be responsible and to demonstrate what they’re doing to ensure it’s not going to happen again," Kaplan said. "And we’re not seeing that.”