Can corporations go to hell? An existential quandary for the Supreme Court

SCOTUS has decided corporations are people with a capacity for earnest religious conviction. So it only follows... 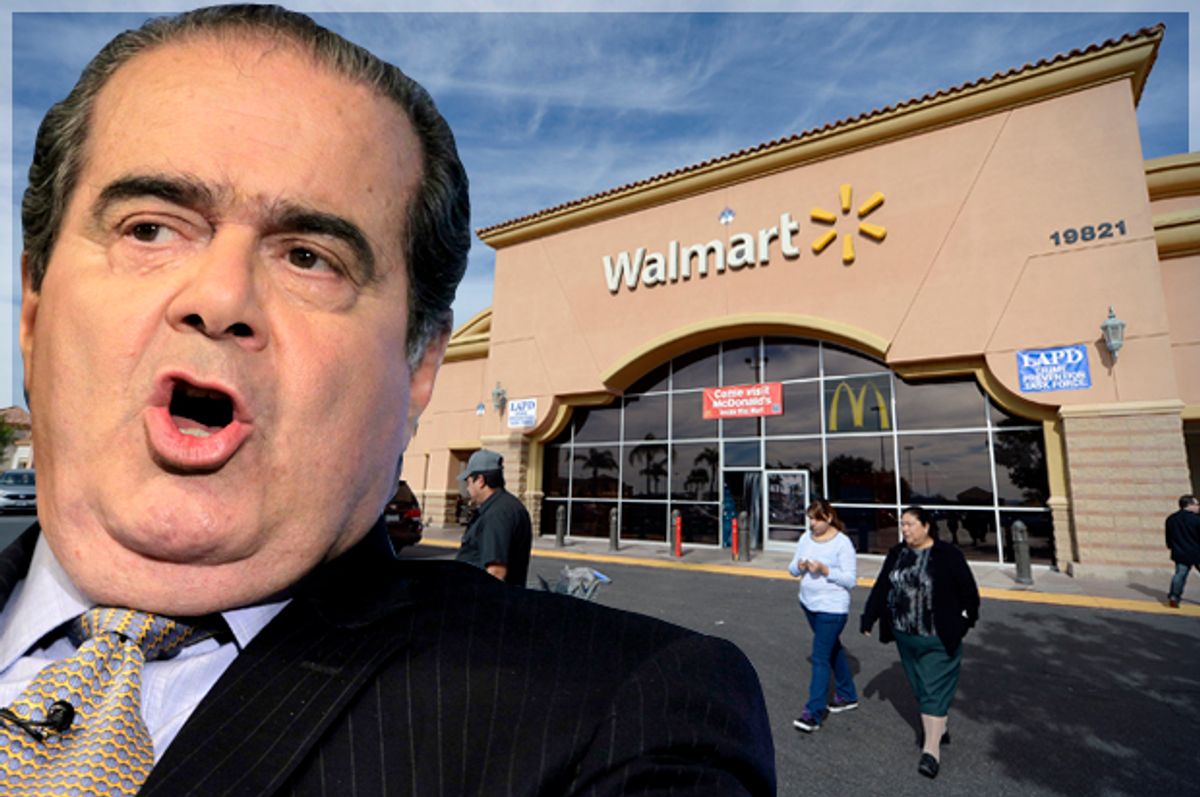 This should not be taken as a rhetorical question. This is a legitimate query arising from the Supreme Court’s ruling earlier this year in Burwell v. Hobby Lobby. As you'll recall, a 5-4 majority recently decided that a corporation, such as Hobby Lobby, has the right to refuse coverage to employees who wish to use certain contraceptives, provided said refusal stems from earnest religious convictions. Even if these religious convictions produce moral outrage based upon a fundamental misunderstanding of the manner in which these contraceptives function, the majority maintained that the corporation still does not have to cover them. Religious liberty is more important than the veracity of the premise on which the corporation’s legal argument relies.

The argument for personhood has been employed in several other decisions issued by the Roberts Court. Perhaps the most famous (or infamous) is 2010’s Citizens United ruling, which declared that the federal government cannot limit a corporation’s right to free speech. While this may seem rather innocuous at first, the controversy surrounding the decision is derived from the fact that corporations do not possess mouths, and that, consequently, their checkbooks serve as their primary means of communication, especially with regards to speech that is of a political nature. In essence, the decision allowed corporations the right to give as much money as they like to virtually any political cause.

Critics of the decision have said that this allows for corporations to influence policy in ways that could be detrimental to the electorate and the core principles of democracy. They believe that such a paradigm — especially when exploited by a cadre of well-financed ideologues with calamitous designs upon environmental regulations and workers’ rights — invites and engenders corruption. However, Justice Kennedy, who wrote the majority opinion for Citizens United, understands that this is not the case. “That speakers may have influence over or access to elected officials does not mean that those officials are corrupt,” he wrote. Though 80% of Americans polled in May said they believe the opposite, Kennedy had the prescience to note, in 2010: “…The appearance of influence or access will not cause the electorate to lose faith in democracy.”

As the court has determined that corporations are (presumably living) people with the capacity for earnest religious conviction and devotion, does this mean that they will ultimately have to come before God on Judgment Day? As it was written in Romans 14:12, “Each of us will give an account of ourselves to God.” At first glance, if we are to agree with the Court and take Paul at his word, then corporations will one day have to stand in line to be judged with the souls of Adam, Eve and their progeny of billions.

Does this mean that corporations have souls? While this appears to be the only possible solution to such a noodle scratcher, it seems unlikely.

A corporation is a construct of multiple transactions and parties with a common purpose or goal. A corporation does not possess independent volition; it is reliant upon its constitutive parts. The corporation’s assets, the primary medium through which the entity communicates, can only collect dust (and interest) when deprived of people to allocate these resources to specific projects. While it may survive its constitutive parts, as individual workers have the freedom to leave one corporation for another or retire, a corporation is a meaningless concept when deprived of workers, much as the spirit of a nation ceases to exist when the denizens of such a nation cease to be. While one may argue that a corporation produces a unique esprit de corps among employees, it is safe to say that a corporation, as a unique entity, does not have a soul, even if it is a person.

Can God judge a corporation, then? Will He judge each person both as an individual and as a member of each of the corporations for whom (not which) this person has worked or will work over the course of his or her lifetime? What about the level of influence one possesses within the corporation? The majority of workers will never have more than a minuscule amount of influence over the direction of the corporation for whom they work; they will merely work for the good of the corporation. In fact, many workers will inevitably be precluded from influencing certain acts in which the corporation partakes due to their limited time with the corporation. Will God judge a person who briefly worked as a teller for a massive banking conglomerate in the 1960s for the havoc said bank caused when predatory lending practices were all the rage back in the 2000s? What about mergers? Will J. P. Morgan be judged for the sins of both Chase National Bank and the Bank of the Manhattan Company?

Even for a deity responsible for killing all of the first-borns of Egypt, including the first-born cattle (Exodus 11:5), this seems a bit extreme. In fact, to judge even the most influential members of a corporation may not be possible in Christianity, provided they are to be judged as individuals, too. The New Testament is clear that each person must stand before God alone — once. Per Hebrews 9:27-8: “And just as it is appointed for man to die once, and after that comes judgment, so Christ, having been offered once to bear the sins of many, will appear a second time, not to deal with sin but to save those who are eagerly waiting for Him.” One cannot die and be judged as both an individual and a member of a corporation. There is a clear prohibition against double jeopardy in Christian law.*

To recap: The Supreme Court has decided that corporations are people with the capacity for earnest religious conviction. However, while they may hold said convictions, these corporations, taken as the sum of their constitutive parts, cannot be held accountable or punished by the divine when they fail to abide by the principles of the religions they claim to follow (love thy neighbor as thyself; turn the other cheek; guard against covetousness, as one's life does not consist of assets; practice charity, but don't do it for the sole purpose of being perceived as a generous person, etc.). This is because corporations do not possess unique souls. Only possessing a unique soul is sufficient for judgment by God. Consequently, corporations are people who can’t go to hell because God cannot punish them without engaging in double jeopardy, which is forbidden.

Such a conclusion shouldn’t come as too much of a surprise to Americans. No judge in this country seems to be capable of punishing them, either.