Facts vs. the GOP: Why America is living through a new era of segregation

Republicans like to blame poverty on the breakdown of the "traditional" family. The numbers tell a different story 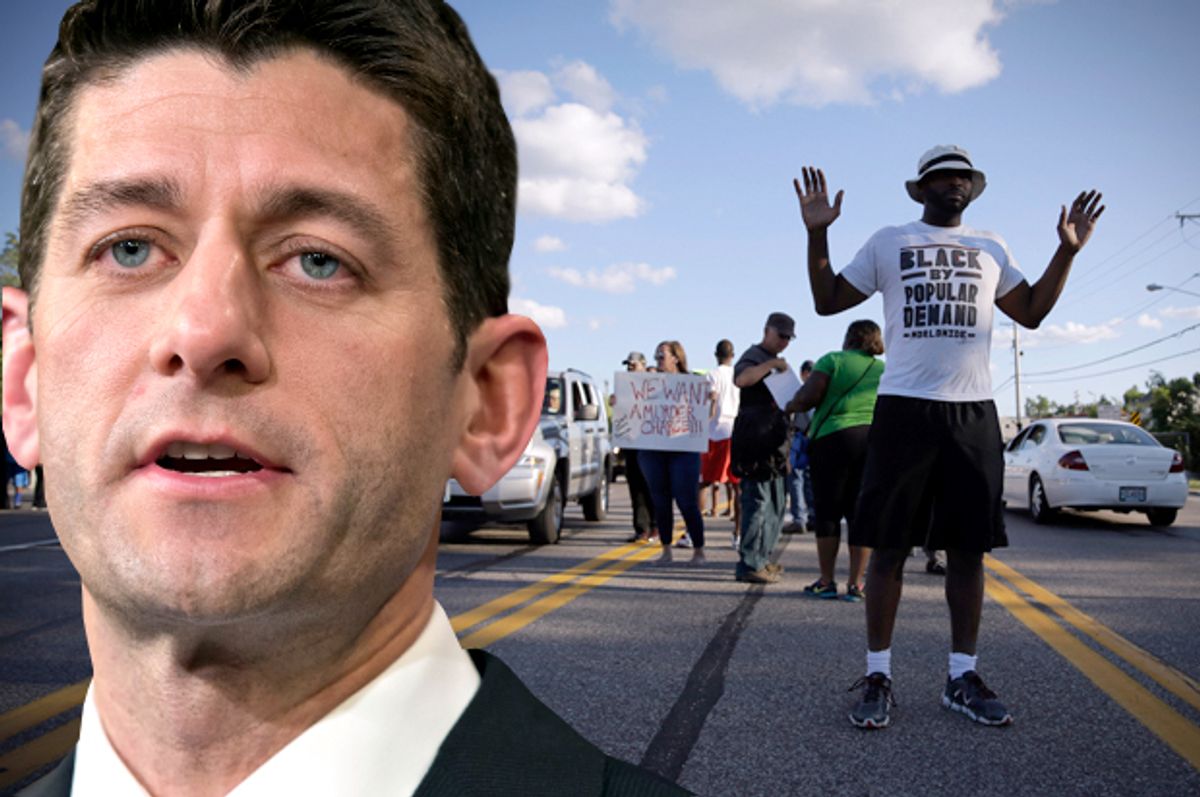 Recent events in Ferguson, Missouri, have once again made the nation consider the durability of racial injustice as a defining factor of the American experience. Black children go to increasingly segregated schools, experience significantly less mobility than whites and are far more likely to be incarcerated for nonviolent crimes. The American dream has always been defined by upward mobility, but for black Americans, it’s harder to get into the middle class, and a middle-class lifestyle is more precarious.

Two researchers from the National Bureau of Economic Research — Melissa Schettini Kearney and Phillip B. Levine — find that single motherhood is largely driven by poverty and inequality, not the other way around. They write,

The combination of being poor and living in a more unequal (and less mobile) location, like the United States, leads young women to choose early, non-marital childbearing at elevated rates, potentially because of their lower expectations of future economic success.

A report by the British Rowntree Foundation had a similar finding: “Young people born into families in the higher socio-economic classes spend a long time in education and career training, putting off marriage and childbearing until they are established as successful adults.” Women in the slow track, in contrast, face “a disjointed pattern of unemployment, low-paid work and training schemes, rather than an ordered, upward career trajectory.” This is largely due to “truncated education.”

So, marriage fails to explain black-white gaps in mobility. What, then, is responsible for the lack of upward mobility among blacks?

Racial segregation explains how it’s so easy for the black middle class to slip back into poverty. As sociologist John R. Logan writes, “The most recent census data show that on average, black and Hispanic households live in neighborhoods with more than one and a half times the poverty rate of neighborhoods where the average non-Hispanic white lives.” This has profound implications for upward mobility.

A 2009 study by Patrick Sharkey finds that, “Neighborhood poverty alone accounts for a greater portion of the black-white downward mobility gap than the effects of parental education, occupation, labor force participation, and a range of other family characteristics combined.” Sharkley finds that if black and white children grew up in similar environments, the downward mobility gap would shrink by 25-to-33 percent. As the chart below shows, black children are far more likely to grow up in high poverty disadvantaged neighborhoods, which makes upward mobility difficult. (Source) 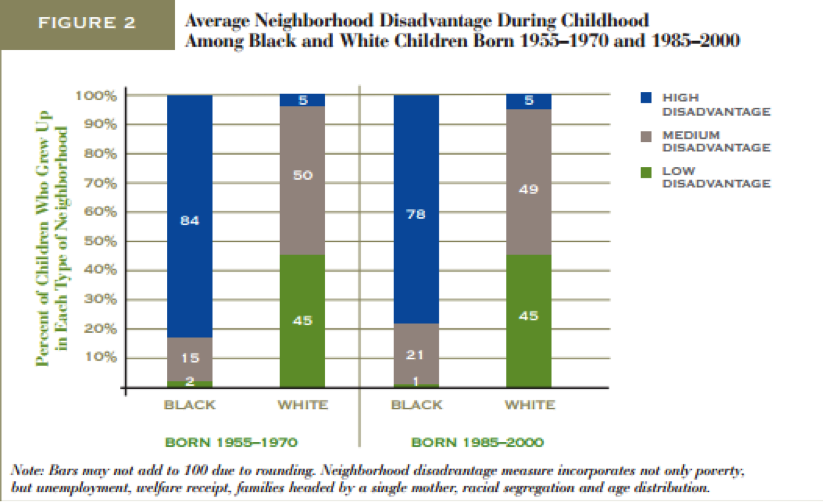 2. War on drugs and mass incarceration

The war on drugs disproportionately targets people of color: One in 12 working-age African-American men are incarcerated. While whites and blacks use and sell drugs at similar rates, African-Americans comprise 74 percent of those imprisoned for drug possession. The U.S. prison population grew by 700 percent between 1970 and 2005, while the general population grew only 44 percent. The effects of incarceration on upward mobility are profound.

In "When Work Disappears," Harvard sociologist William Julius Wilson points to the importance of occupational segregation -- the fact that African-Americans who are often concentrated in poor urban areas struggle to get jobs in the suburbs or places with a long commute. Only 2.9 percent of white workers rely on public transportation, compared to 8.3 percent of Latino workers and 11.5 percent percent of black workers.

An excellent example of occupational segregation is in Silicon Valley, where data released after pressure from advocacy groups like Color of Change suggests that at Facebook, Twitter, LinkedIn, Yahoo, Google and eBay, only 3 to 4 percent of workers are black or Hispanic. However, a study by Working Partnerships USA finds that, “While Blacks and Latinos make up only 3 to 4 percent of the disclosed companies’  core tech workforce, they are 41 percent of all private security guards in Silicon Valley, 72 percent of all janitorial and building cleaning workers, and 76 percent of all grounds maintenance workers.” (Source)

Marianne Bertrand finds that changing the names on résumés to those that are traditionally white or black affects call-backs for jobs. White-sounding names were 50 percent more likely to get called for an initial interview. She also finds that whites with better résumés were 30 percent more likely to get a call-back than whites with worse résumés, but for blacks, more experience only increased call-backs by 9 percent. Another barrier to employment can be social networks.

Between 2007 and 2010, all racial groups lost large amounts of wealth. However, the effects fell disproportionately on Hispanics and blacks, who saw a 44 percent and 31 percent reduction in wealth, compared to an 11 percent drop for whites. This was due to blacks and Latinos disproportionately receiving subprime loans, both because of outright lending discrimination and housing segregation. A recent research brief by the Institution on Assets and Social Policy finds that the wealth gap between white families and African-Americans has tripled between 1984 and 2009. They find five main factors responsible for driving the gap, which together explain 66 percent of the growth in inequality. The factors, in order of importance, are number of years of homeownership, household income, unemployment, college education and financial support or inheritance 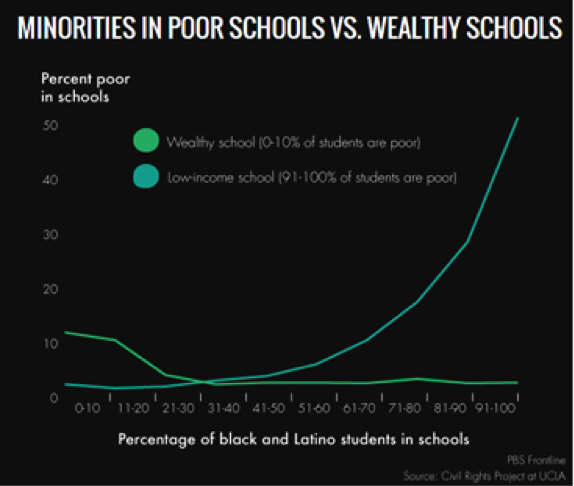 Schools today are becoming more segregated, rather than less segregated. The average white student attends a school that is 72.5 percent white and 8.3 percent black, while the average black student attends a school that is only 27.6 percent white, but is 48.8 percent black. These schools are underfunded and understaffed. In 2001, the American Civil Liberties Union filed a lawsuit after 18 public schools had “literature classes without books,” computer classes where students discuss what they would do if they had computers, “classes without regular teachers” and classes without enough seats where students stood in the back.

The idea that there are biological factors reducing upward mobility for African-Americans is both odious and entirely false. As Nathaniel Hendren told me when discussing his research,

We can absolutely reject that theory. In order to believe that theory, you have to believe that the spacial differences across the U.S. are differences in some kind of transmission of genes. Suppose you move from one area to another and you have a kid. Does your kid pick up the mobility characteristics of the place you go to? Now obviously, your genes don’t change when you move. What we find is that kids start to pick up the mobility characteristics of the place they move to, and they do so in the proportion to the amount of time they end up spending in that place. The majority of the differences across places are casual. If people lived in different places, they would have different outcomes.

This all leads to the saddest conclusion -- were it not for poorly conceived policies, we could have more upward mobility in the U.S. While conservatives like to point at cultural factors and throw up their hands, a far more productive solution is to redress our massive public policy problems -- like the war on drugs and dropout mill schools -- that are proven to reduce upward mobility.

The conservative mind-set is ahistorical -- we are told to throw away the legacy of slavery and segregation and expect blacks to pull themselves up by their own bootstraps, ignoring the structural dynamics keeping them down. Research by Graziella Bertocchi and Arcangelo Dimico finds that counties with higher concentrations of slave ownership in 1870 had higher levels of poverty and racial inequality in 2000. Matthew Blackwell finds that Southerners who live in counties with higher levels of slave ownership in 1860 express more racial resentment and are more likely to oppose affirmative action. As Marx noted, “Men make their own history, but they do not make it as they please; they do not make it under self-selected circumstances, but under circumstances existing already, given and transmitted from the past. The tradition of all dead generations weighs like a nightmare on the brains of the living.”